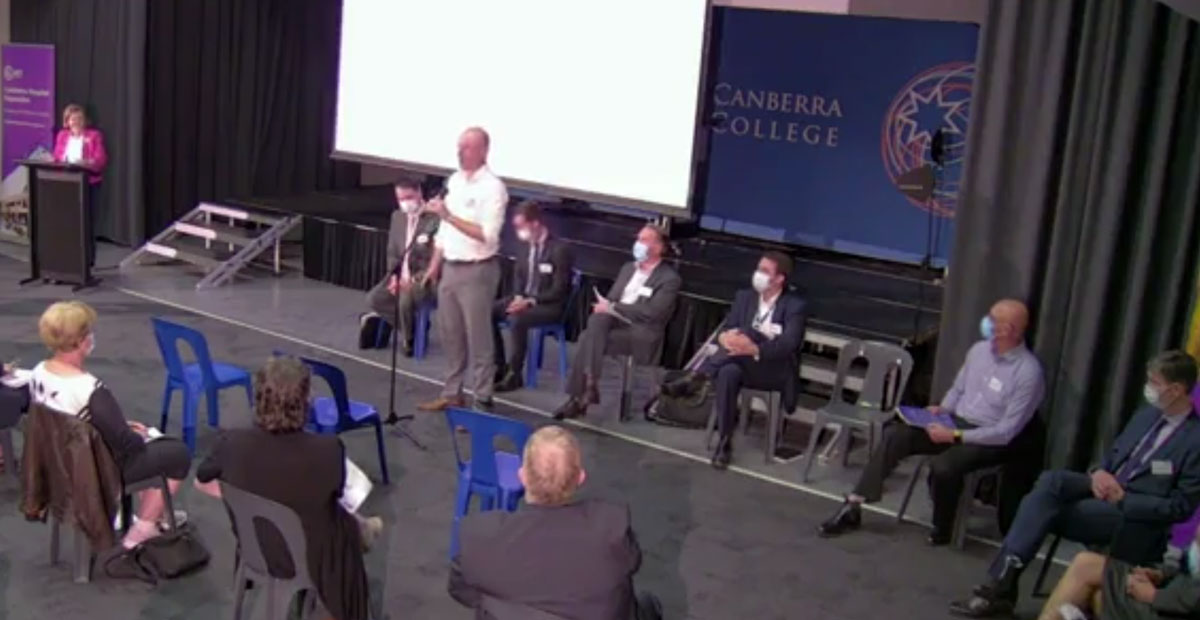 For almost half a decade, the Woden Valley Community Council (WVCC) has been careful not to oppose development. The WCCC has focused on the quality of the developments and to have the redevelopments include social and sporting facilities.

The WVCC  leadership has tried every trick in the advocacy book to get the government to provide facilities and greenery.

Meanwhile, the trees keep disappearing, the pool is closed, the community and cultural facilities are minimal and the need for multi-use sports facilities just keeps being ignored.

There are significant infrastructure projects happening in and around the centre. These include the Woden Hospital expansion, the new CIT on the former bus interchange site, the new interchange on the former street and the proposed arrival of light rail to replace the efficient buses connecting Woden to Civic.

That tram might also go on to Mawson and even Tuggeranong in the distant future.

On Tuesday (December 7), ACT Minister Chris Steel and his boy band of six senior project managers fronted a hall of locals to “inform” them of the infrastructure developments they are landing within central Woden.

There was an expectation from the local residents that the ministerial line-up would also talk about the issues that residents keep listing for discussion. Did not happen.

Instead the Chris Steel boys rolled out their well-practised spin as if they were doing presentations at some conference of urban developers.

The expectation of the presenters was that local residents needed to hear about how their urban life was changing and the major infrastructure work will be the answer to all their problems.

Most of what was presented was already available online and through the various press releases. It was a well organised spruiking hour of the minister’s boy band doing their latest hits – talking up their various projects.

In addition to the songs of self-praise by the minister and his cabal of look-alike blokes, one senior female bureaucrat spoke briefly about the work of the City Services and a couple of times the planning directorate’s deputy, Erin Brady, stepped forward to explain how the ACT government’s planning reforms would change the world while doing her best to avoid answering any detailed questions.

Once the questions commenced, it was obvious that expectations of the audience were different to the minister and his well-rehearsed blokes.

The locals had lists of queries about trees, open spaces, community and cultural facilities and the need for a multi-use sports facility.

The planning directorate and minister were able to skilfully avoid answering any tricky issues by explaining yet again how the planning review will be addressing concerns and making planning Woden so much better.

The best answer on the night was that the planning directorate is monitoring the growing needs for social, community and improved green infrastructure and will be considering these sometime down the track.

A couple of key questions were completely ignored. One person was keen to know why some trees had red paint on them. Not answered.

Fiona Carrick, chair of the WVCC, queried the reality within one presentation that the pedestrian corridor besides the CIT was going to be a passageway with greenery and sunshine whereas the reality is that it will be in the southern shadow of the apartments to the north. That question was rendered the sound of silence – next question?

A topic avoided and not reported on was the planning underway for apartment developments along the tram going south into Woden.

This will involve major changes to the established suburbs and the significant loss of greenery. This major infrastructure change was not mentioned.

Chris Steel, as Minister for something, probably congratulated his band of blokes on a job well done and will write a glowing report for the chief minister’s newsletter about how the infrastructure band sang in wonderful harmony that evening in Woden.

The other obvious point to be made is that this ACT Greens/Labor government is yet to work out how not to have a bevy of look-alike blokes running the major urban projects.

As for the residents, this Woden Renewal Information Session was similar to presentations by developers at WVCC meetings.

They arrive, smile a lot, sing their songs of self-praise, avoid difficult issues and then depart with all boxes ticked – rarely to be seen again.

The minster was not even going to pretend to be Santa Claus and bring any community-focused goodies to the people of Woden.

They have been informed and that was that!    Bad Santa!