ACT Government does not get biodiversity 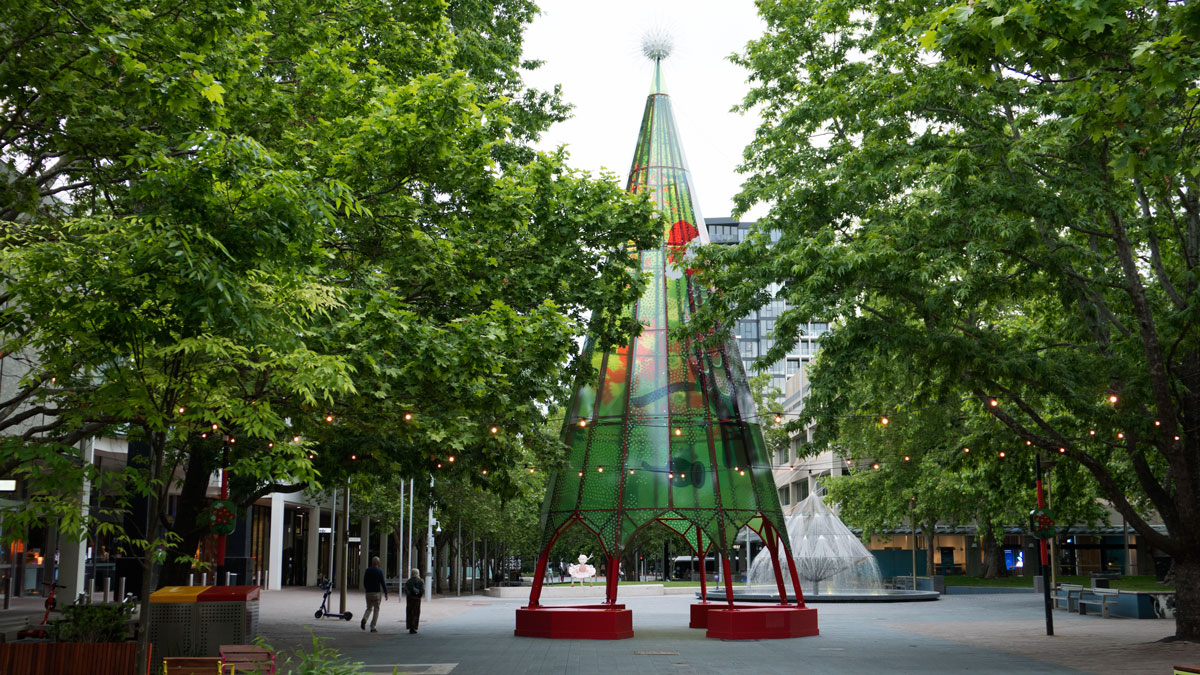 Wandering through Civic, there loomed ahead a shape.

There it was, the latest gift to Canberra residents from the ACT government’s City Renewal Authority; its version of a Christmas tree for when you don’t really want to be jolly, but have to do something.

The contrast with its surroundings was stark. The City Walk trees are glorious.

Whereas this plastic construction was pretending to be something it was not.

When it comes to trees and biodiversity this government pretends to be committed to greenery, whereas what we get most of the time is spin and little real action.

Write them a letter questioning commitment and back comes blah, blah, blah! Bah, humbug to the writers of such rubbish!

Recently there has been a small group of blokes pop up at community meetings as well as online (same people) accusing residents in established suburbs of stopping younger people getting into homes.

This Labor-linked cabal is pushing a dubious line that, by coincidence, directly reflects the spin used by the government and its developer associates.

They state that in questioning inappropriate development, the community groups are causing a housing shortage.

Bah, humbug to the politicians who put these people up to this naive carry-on.

There’s not enough space to outline in detail the silliness of the argument that residents looking after the future liveability of their suburbs are somehow blocking new housing.

To start, have a look around our suburbs and you will see loads of new housing appearing. Instead of dealing with those distractions, here’s a point or two that should form the basis of debates into 2022.

This presumes that the ACT Greens and their Labor colleagues are interested in providing suitable housing for Canberra’s future residents.

The issue seems to be that the basic residential zone (RZ1) needs to be done away with to allow for more choices of housing – ignoring that there is the full suite of housing already available.

We need to stop debating plot ratios, how to divide up established blocks and how much should be squeezed on to smaller and smaller sites.

The more intelligent approach would be to base planning decisions on how developments add to the biodiversity of the suburb and the city.

Start by introducing a biodiversity index for the city, for all suburban precincts and then, as that is used, develop and apply biodiversity criteria to each development.

Rather than all the usual complex and inaccessible planning criteria that is being randomly implemented by the planning directorate, and given that the future of the planet is what we need now to focus on, the main criteria for future planning should be to ensure the old and new suburbs become more liveable while doing everything possible to still have a planet to live on.

This is not a request for politicians and bureaucrats to establish one of their meaningless taskforces or legislative sub-committees.

It is a request that the government take actions by urgently looking at the well-established biodiversity indexes used internationally and to put one into practice in 2022.

By using one already established, those using it will soon identify what needs to be adjusted.

There desperately needs to be a complete change to the approach to planning. Biodiversity – plants, trees, shrubs, water, animals and insects – need to be the priority consideration.

Saving the planet, increasing the biodiversity and greenery urgently should not be exclusive of there being more development within all the suburban areas.

It is about having a completely forward-looking approach – doing something real about climate change and creating places for people to live comfortably as the temperatures rise and energy becomes more expensive.

The catalyst for these suggestions was that fake Christmas tree in Civic.

A final suggestion would be for our Fun-Leader, the now senior Andrew Barr, to engage new designers for next year’s Christmas with something really wild and spectacular along Northbourne Avenue.

Something jolly, something that will not only celebrate Christmas but also highlight the beauty and importance of greenery and biodiversity in Canberra.