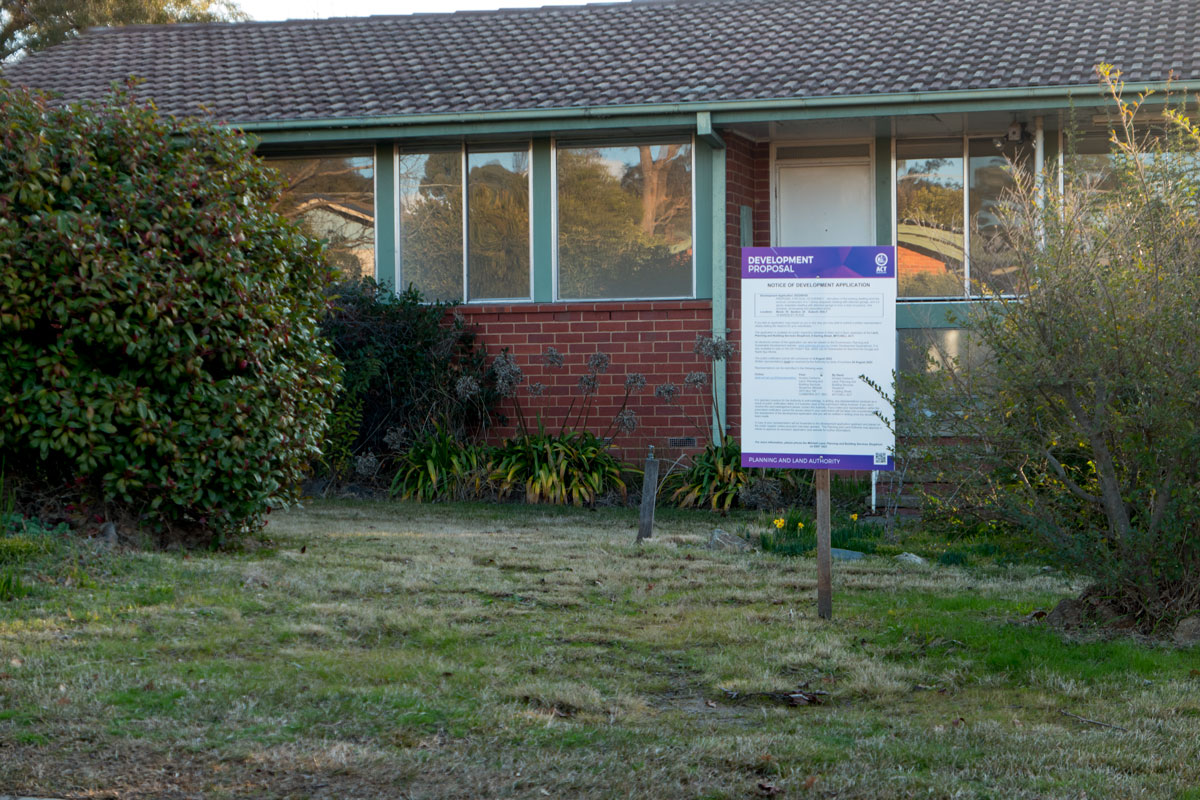 ACT politicians use worthy words to constantly remind locals they will soon address the complexities of climate change in suburban developments and that they will sometime soonish preserve the bush character of this city. It would be great if they actually did something real beyond producing more spin.

The ACT Greenslabor government executive has given free rein to the planning directorate to amend and ignore the planning regulations as it sees fit. The common perception of the government’s culture towards planning and development would be that it is laissez-faire – anything goes that suits the development industry and the need to squeeze out profits.

The reality is that planning and development in Canberra does not have the priority on liveability, aesthetics, biodiversity and the climate.

The tools for delivering overdue changes to planning that are frequently lauded by the Greenslabor politicians, who are wilfully blind to the realities of what is happening, are the glacial roll out of their planning reforms. These are frequently referred to when they re-announce worthy sounding policies as well as planning variations to the former planning mess. These are yet to be enacted – nothing has changed.

The real aim is to allow planning more flexibility to ignore the government’s own rules. This provides developers with certainty the wishy-washy rules allow them to maximise the use of lands without having to heed pesky overdue climate change or green infrastructure regulations.

Instead of enforcing announced rules on permeable surfaces, the rules themselves are permeable. They allow almost anything to wash through the directorate.

If there was a need for real-life proof of how planning and development is being implemented, look no further than the government’s own housing developer, Housing ACT.

If a Housing ACT development application sign (such as the one pictured) appears in a neighbourhood, then locals know that significant changes may be about to happen to their neighbourhood character.

To be clear, this is not about whether social housing should be on these sites. They have usually been there for decades. The issue for residents is what the government deems as acceptable housing design and that it allows the automatic removal of most greenery (goodbye to biodiversity).

Trees and shrubbery are bulldozed and, too often, the new building represents the worst of suburban cramming – with two to four units replacing one house. The result is usually a lost opportunity for good architecture and landscape design. Architectural professionals have concluded that Housing ACT is performing like a rogue developer.

There’s a site in Holt going through this process with neighbours wondering how to get Housing ACT to be sensible. There is one house on one large block.

It would be feasible to upgrade the present house and build another behind it. This would involve little rubble going to the tip and should allow for most of the greenery to remain.

Instead, Housing ACT has applied to bulldoze everything and replace the house with a set of two connected houses, with the second being two storeys. Most of the block will be either buildings or concrete. There is a minimum allowance for greenery – gardens. Forget having a backyard.

The better solutions are obvious. This would mean that the Greenslabor politicians enact their announced policies and planning reforms variations. Does not happen. It seems to me they dare not challenge the Housing ACT bureaucracy.

The ACT could lead on the quality of housing being built for new social housing. It doesn’t! Community groups consistently raise alarm about this lack of real-world liveability, good architecture and biodiversity-focused landscape standards not underpinning Housing ACT’s replacement of social housing.

Given the presence of ACT Greens within this coalition government, residents remain puzzled by the Greens’ lack of action on these most basic of housing issues. It is time for Housing ACT, being part of government, to be required to implement policy announcements, even though they may not be legislated. It would be a humane and mature thing to do.