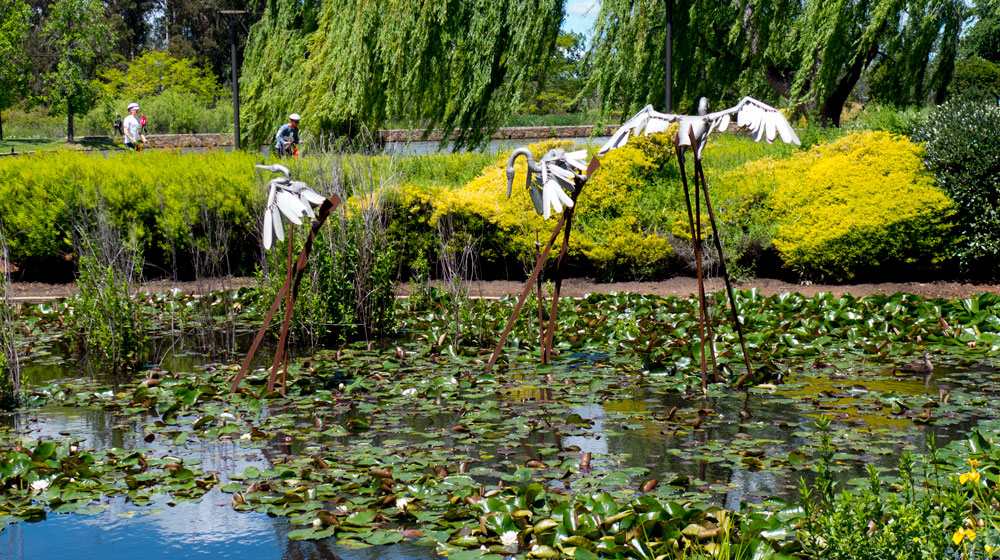 Sometime during the last election, a candidate said something about revising the public sculpture program initiated by Jon Stanhope when he was chief minister.

Given how the city needs to position itself as having a culture that would attract visitors as well as being a great place to live, it is definitely time to reinstate a public sculpture program.

The former program was successful. A few noisy trolls went on about particular works and made the issue a political one that led to the programs being cancelled. This was a shame and a mistake.

This city should have a well-resourced and well-run sculpture program to build on a selection of works that are scattered throughout the suburbs and along major roads.

Such a program needs to include expertise to avoid “plonk art”, where works are placed with no thought to the context or surroundings. Bad positioning can lead to works looking mean and miserable. Agreeing to setting up such a program is easy – and should be done – but bringing together the expertise to do it is a longer story.

There is another opportunity for public sculpture to be a feature of Canberra’s profile.

Christmas 2020 is almost upon us and many will be deciding where they can travel within Australia safe from the pandemic and somewhere that offers an interesting experience. What is on offer that reflects on the culture of the city?

There’s Floriade or in 2020, Floriade Reimagined. Another could be the Canberra City Gallery with its varied exhibitions. Then there are the official online tourism promotions. Unfortunately, these expensive online media messages are cringeworthy.

Despite the best efforts of some of many developers and the Planning Directorate, Canberra’s stand-out reputation is still that it is a “bush capital”.

The general impression remains that the city’s established areas are blessed with fabulous trees, parks and open spaces. Locals have come to value these green spaces and trees even more as they seek peace away from thinking about all the scary stuff swirling around the world.

Canberra’s open spaces by themselves may not draw visitors but maybe it is time to revisit an often-mentioned proposal to enhance at least one of them.

And before the City Renewal Authority gets any silly ideas, this is not suggesting more inappropriate developments and archi-parks (think West Basin barbarism).

Instead the suggestion is about enhancing local cultural opportunities, making use of parklands by adding something to lure visitors to the city. Think permanent public art pieces – think sculpture.

These well-designed and accessible parklands could be enhanced with many more commissioned sculptural pieces permanently located so that people are encouraged to wander around and to sit and to experience a range of pieces – large and small, contemporary and traditional (whatever that means) and many mediums.

There are some there already, so why not add to those.

In conjunction with an array of many more permanent works, there could be the occasional addition of temporary artworks to mark particular festivals – possibly linking with or as part of Contour 556.

But the emphasis should be on the static works being permanently placed carefully throughout these easily accessed lakeside parklands (those on the north of the lake). The suggestion is not applicable to the arboretum as it is not easy to access, is not friendly to wander about, it is huge and hilly and it is not a parkland.

Commonwealth Park is close by the city centre and deserves to be known more and used more often by visitors – as well as being a place for quiet meanderings by locals – who are increasing in number with developments in nearby suburbs.

Put those two ideas together and there could be a comprehensive public sculpture program for the city – the nation’s bush capital and a sculpture capital. I am sure Jon Stanhope would like to see his former program restarted and expanded.