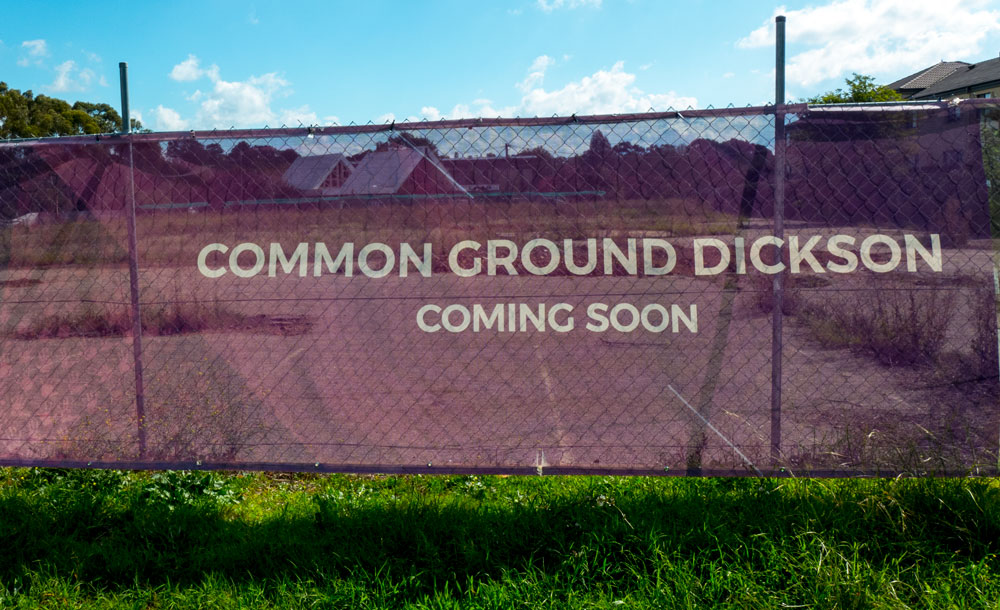 Stephen Bartos, chair of social housing provider Common Ground, said his organisation wasn’t involved in the planning processes around the planned Dickson site and certainly didn’t want to be, when he spoke to “CityNews” on June 3.

Common Ground’s new site is part of the infamous Dickson land deal between the ACT government and the Tradies.

Despite his effort to distance Common Ground from this mess, the reality is that Argyle Community Housing Ltd, the NSW registered public company and Common Ground’s parent body, benefit from this land swap.

Common Ground owns the outcome of this yet to be thoroughly investigated land deal. Not a good look!

The big problem remains that this proposal is bad governance at work, with terrible things being done in the name of a worthy cause.

Bartos acknowledged that the community has stated clearly that Section 72 Dickson should remain community lands for cultural and recreational purposes.

He encouraged the inner-north community not to let its aspirations get in the way of Common Ground and hinder helping chronically homeless people.

This type of disingenuous remark is what people now expect from the politicians and bureaucrats involved with this proposal. It is not good governance for Common Ground to imply such an accusation.

Locals are not objecting to social housing and assisting chronically homeless people. Residents have asked for Common Ground to be not on Section 72.

Stephen Bartos heard this when he attended public meetings with the government bureaucrats presenting on this proposal.

Locals remain clear that available lands on this site should be enhanced for community, cultural and recreation activities, not for apartment towers, be they social-housing or privately-owned.

It is obvious that Common Ground’s social housing tower will be the Trojan Horse to justify the sale of community lands on Section 72 for more apartment towers.

Does Argyle Housing/Common Ground realise how complicit they look by being part of this takeover of whole sections of Section 72 for further housing development?

Bartos stated that Common Ground has been embraced in the Gungahlin community. This has been said often as if the inner-north community would be at fault if it did not do likewise. It is such an insulting comment.

There are 70,000 plus residents in Gungahlin and one wonders how this large community has been informed about a plain apartment tower on the south-east edge of the main commercial centre. This is not to say that they wouldn’t “embrace” it if they knew about it, but it is more likely that given its isolated location that the vast majority have not paid it any attention.

The apartment block has been opposed, not because of its purpose, but because of the lost opportunity for wider community uses, the faulty development application, the boring design proposed, its location is on a possible flood plain and that this tower, being eight storeys (the same as towers on Northbourne), will dominate the local area.

The proposed Dickson Common Ground is the start of the removal of well-known, cherished community land. Argyle Housing/Common Ground cannot walk past this loss of precious green spaces and potential community facilities. Is this how they wish to be remembered?

This was a political decision made in the closing days of the 2016 ACT election to offset the social housing mismanagement by Housing Minister Yvette Berry.

Common Ground management has become linked with how this Labor/Greens coalition government has made a joke of democracy and governance.

Argyle Housing is viewed as being party to and the beneficiary of political games.

If this is not the preferred perception of the Common Ground management, then it is up to people such as Stephen Bartos to stop this nonsense and to then partner with the community to deliver better outcomes for the future tenants and for the inner-north residents who cherish their community precinct – the Dickson Parklands.

This would be good governance!