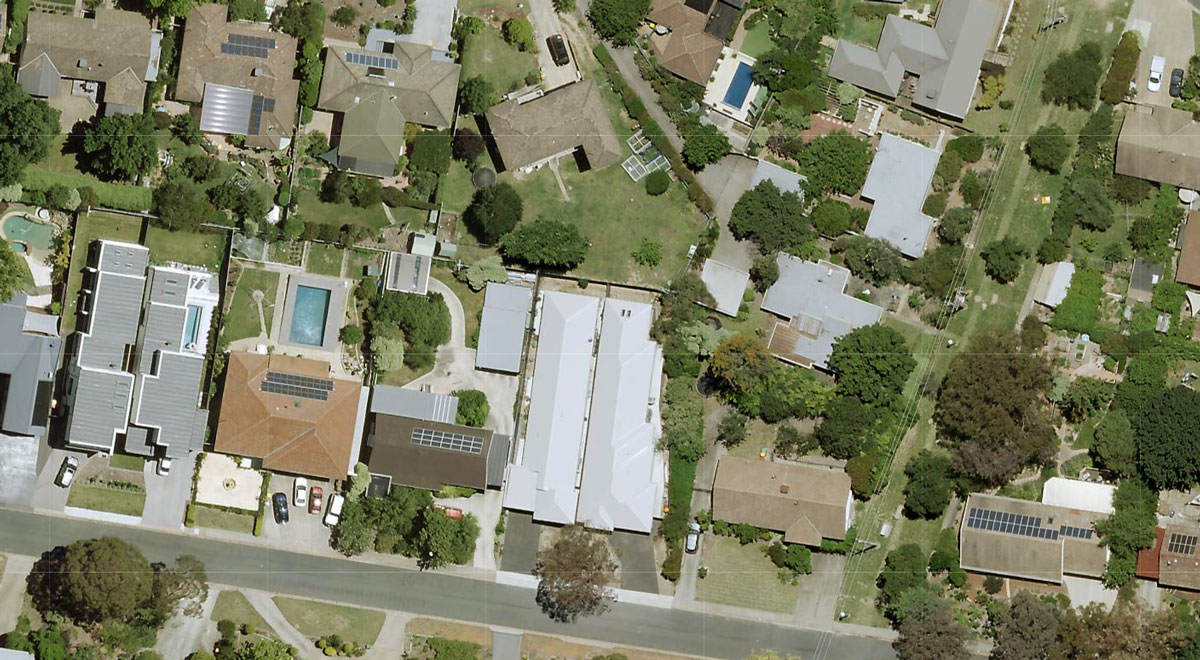 When it comes to infrastructure and planning issues, the Woden Valley Community Council continues to have difficulties having real discussions with this ACT Labor/Greens government.

The best they have achieved was the information session by the Chris Steel boy band at the end of 2021.

A few questions were asked, some answered, but the tone of the presentations was about telling people what the government is doing – rather than listening to what people had to say about what they were looking for. Such is life with a government that does not believe in transparency!

At the meeting on Wednesday evening (March 2), the community council president, Fiona Carrick, made some thought-provoking points about the houses being built on previously Mr Fluffy blocks in Woden.

She outlined the stated aim of the government’s current planning reforms. The claims are that it will be simpler, be lessrules based and be outcomes based.

She then provided an overview of the criteria for houses on previous Fluffy blocks. These included plot ratios, the need for plants and private open spaces and that they were to fit in with the suburban character.

One of her many images had two long residential houses squeezed on to one block. The new residential units are the large ones in the centre of the image above.

I have included below an image of the same block in 2017. You will have to think hard to see how the stated criteria was followed for this block. 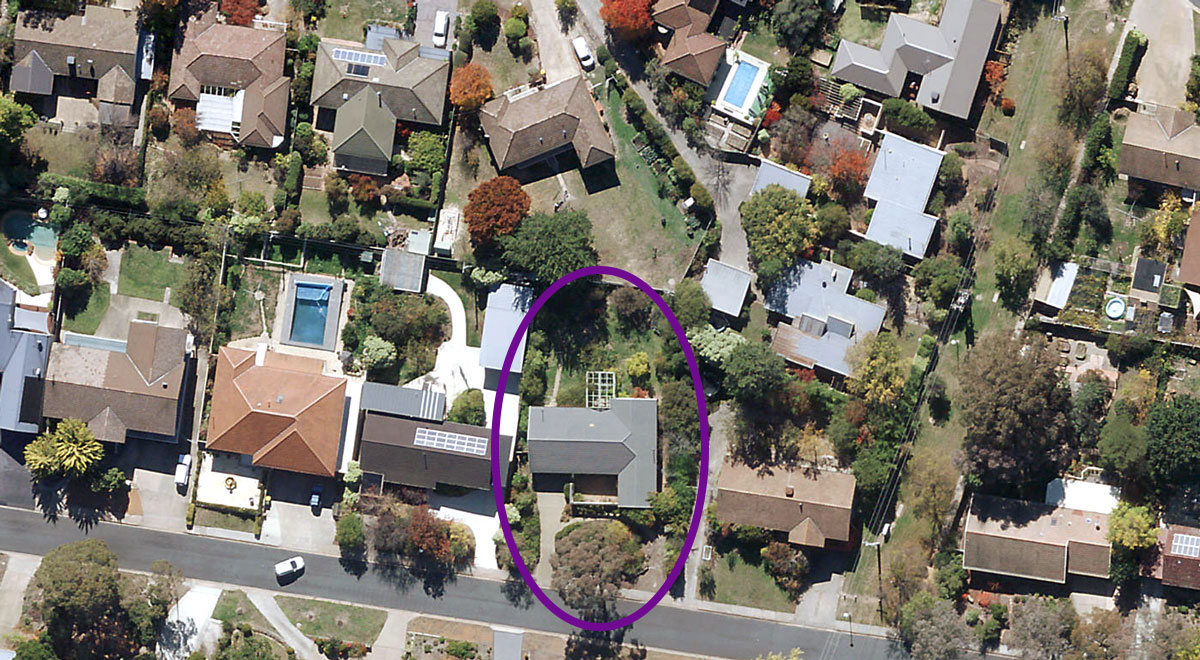 Fiona’s point was this style of outcome is now common across Canberra. Is this what we are to expect with the new planning reforms with these outcomes being the criteria?

The evening’s conversation then moved to the complex goings-on around the Woden town centre. With the new Canberra Institute of Technology being built on what the locals view as the wrong site, with the new interchange being squeezed into the street and the evidence pointing to this being a mess once underway and with strange information being published about where people will have to park in the future, there was not a lot of faith expressed in this government’s ability to get stuff done logically and to best serve the Woden community. 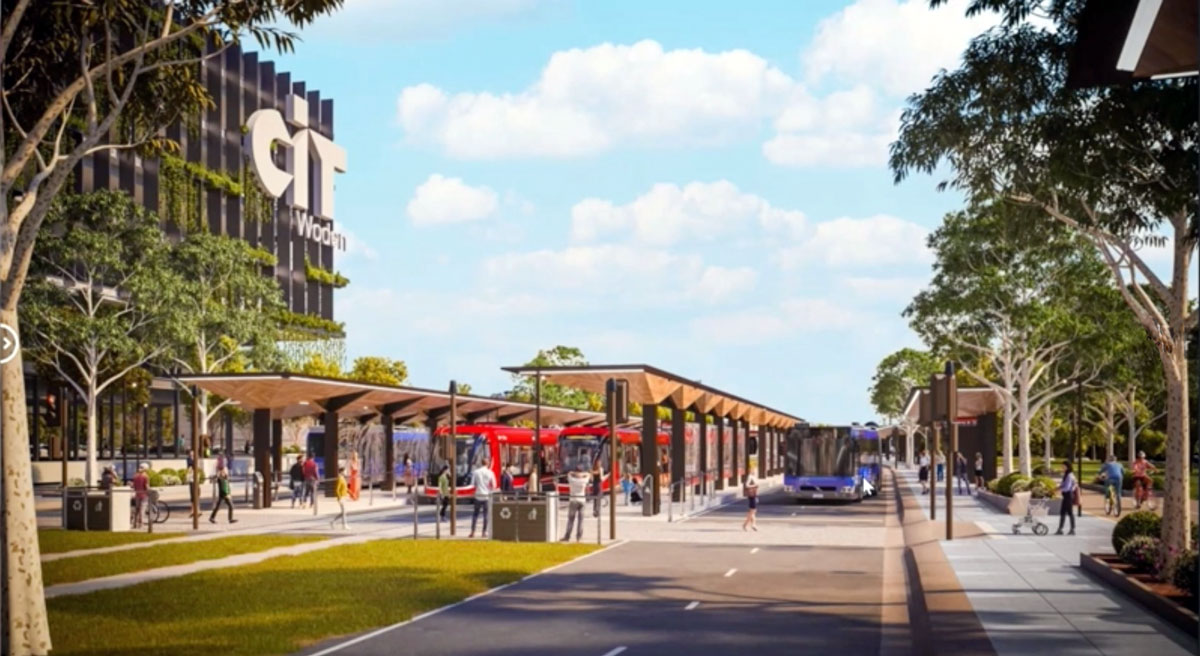 The more devastating conversation was about the tram coming south to Woden. It was clear on the night that people want good public transport. Through their own experiences they know that the present rapid buses deliver well for those making the trip to the Civic and back.

However, people have the view that the tram to Woden and the associated changes to bus services will not match the present levels of service.

The logic of the “Raising of London Circuit” project to lift the road up to intersect with Commonwealth Avenue was seen as silly – and expensive. This will take away the smooth operations of some of the on and off ramps – as well as mix up the modes of transport using Commonwealth Avenue.

This new intersection with its traffic lights will increase the possibility of accidents besides significantly slowing down the traffic along Commonwealth Avenue. All lessons about “Grade Separation” (keeping apart the various transport types) are being ignored – for reasons only known to the government politicians and their agency chiefs. Such is life with little transparency in government!

Fiona threw into the debate information that Brisbane’s City Council is to introduce the Brisbane Metro – an electric bus that runs without tracks, has several carriages and charges as it stops at special stations.

Logic says that this metro-style bus would be just the thing to modernise the express buses going south to Woden. There would be no need to mess with London Circuit, no need for the stupid traffic lights on Commonwealth Avenue, and would negate the issues of installing tram infrastructure through the parliamentary triangle.

Full marks to Fiona Carrick and the members of the Woden Valley Community Council.

They are working hard to bring about people-based solutions on developments, on the provision of community, sport and arts facilities and on getting better public transport for the Woden and the attached areas.

It is hard work given the attitude of this government to not listen to what people know would be logical and best for the community.