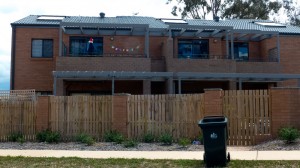 Canberra, as with most major centres in Australia, is caught up in complex and sometimes nasty urban planning debates.

On the one side there is the property council groupings that include the gung-ho developers*, and their colleagues amongst the architects, planners and the planning authorities.

This is the traditional power structure in Australia that has dominated planning and development from the beginnings of the colonies here in Australia. These agencies have paid professionals whose job it is to ensure that their professions and industries prosper and that profits are high.

Unfortunately for the above groupings, many residents continue to desperately continue to wish that infill developments and outer suburb developments should be based on providing resilient, engaging and healthy urban environments.

Here’s typical article that appears every now and then in the local press – click here. Not to be outdone by himself, here’s another by the same chap – just doing his job that he is well paid for – click here. The campaign to discredit the residents and their efforts for enjoyable and liveable suburbs just keeps on being misrepresented by the developer lobby.

The local paper sniffs a story. So what follows are puff pieces trying to stir things up. click here. It helps to sell papers.

In Canberra at present there’s much debate about proposed key urban projects such as the ones for Yarralumla, City to Lake and those just announced for Dickson. Luckily most of us can easily identify that the Liberal Party continues to use the public forums and that it gets all its friends to bombard the letters to the newspaper to gain a strike on the popularly elected ACT Government. We should allow most of that shrill to pass by and await the outcomes of the formal consultations.

I am definitely not a fan of a new sports stadium proposed for Civic. This is to be built where the much-loved swimming pool is right now. Why would you want such a facility in the CBD that is expanding? Parking and traffic and loads more problems are obvious.

However the main issue for these major projects is the quality of the build and urban spaces. This is the issue identified over and over again by residents when they see the rubbish that the ACT planning authority (ACTPLA) keeps approving.

The ACT Government needs to become more serious about the future of this capital city as a model for planning and design. The government needs to introduce an improved regulatory process to decrease the number of bland box cheaply rendered buildings and to enhance the green infrastructure with each DA proposed. All those dreaded but much-lauded Green-wash star ratings should be outlawed.

Then there is the very silly idea that the National Capital Authority (NCA) should have any influence on any design innovations across Canberra. This is a really sad joke.

The NCA has proved its lack of relevance recently by appointing a new design panel dominated by old-style consultants.  I am sure we are about to see some NCA decisions influenced by flawed advice. BUT – luckily for most of us, the NCA’s design panel offers advice to the NCA. This can then be ignored by everyone else.

The ACT government hopefully will keep its focus on obtaining legitimate advice and ignore that whatever stuff may leak out from the NCA’s panels of no-consequence!

As stated many times now, (click here) the NCA’s role is no longer relevant and these national functions needs to be integrated into a new planning authority for Canberra. This new body’s key corporate strategy should be to use community engagement to deliver architecturally integrated designed spaces and buildings that provide for enjoyment, sustainability and enhance the green infrastructure of this wonderful capital city.

Even more local for me, are the developments happening in and around Dickson. I was reminded recently of some of the issues when in conversations with some local residents. One comment said that changes were happening but no-one, especially the planning authority, was paying any attention to the range of services that would be expected to be provided through a group centre such as Dickson.

For instance, one person said that there is no hardware store anymore within easy distance in or near Dickson. As a positive for residents in the precinct right now, it is possible to walk for most services we require in and around Dickson (I include walking to nearby Ainslie for doctors and other shops).

This we fear is about to change for the worse. There remains an urgent need for the planing agencies to develop a comprehensive overview set of policies to ensure the provision of those services that one should expect to be provided through a group centre such as Dickson. This becomes a health and well-being issue given that walking to the centre should be encouraged whenever possible. The less car usage the better!

This is now one focus for our advocacy. Local residents need to get attention back on planning and design for a real group centre; not just one dominated by two supermarkets and their auxiliaries.

Another urgent matter is to get agencies to have aesthetics to be part of the planning criteria. No more bland box buildings!

It was of interest to see a nearby local council ask a developer to go away to rethink the design of a new supermarket complex. Click here.

There is the urgent need to ensure greenery is increased, not reduced with these new developments. Most residents support good development when it happens (rarely) but are very concerned about the continual loss of green infrastructure and biodiversity in our suburbs. There’s even a creative concept out there that should be actioned for the ‘Dickson Drain’- click here.

What it comes down to is that residents would love to see good design and real sustainability issues being addressed. Instead there remains a total lack of faith in how the ACTPLA approves developments. The developers are doing what they can get away with given that what the residents observe is that ACTPLA allows for all sort of bad developments that then forces the residents to mount campaigns of opposition.

Then in amongst all of this, we must not lose sight of the big issue.  We must always make sure that there is more than ample good coffee being served in Dickson! Otherwise what would be the point to all this!

If anyone out there in government would like to respond to or discuss any of this, please send through a call for a friendly meeting. Please make sure that there is good tea and coffee and we can all be friends.

*PS: I believe there are developers out there who care a lot about local communities and the residents. There is absolutely nothing wrong with profit-making. The issue is that so many developers and their property council mates work hard to keep the regulations  tokenistic and to very superficially deal with issues such as aesthetics, sustainability and health and well-being.  Local residents have met with some developers and have had very positive discussions. However the planning authority processes continue to allow for the lowest possible design outcomes and so the majority of developers continue to make hay while they can. A new planning regime is required.