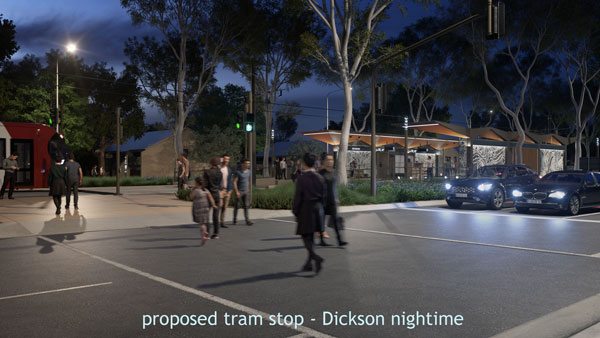 There are not too many places that have tram (light rail) stops that are exciting designs. Most are functional and are usually simply places marked where you stand to catch the tram.

I remember being very impressed with some of the Metro stops in Los Angeles and Pasadena – some being designed for the location and many have public artworks that reflected the locality.

At some stops in Melbourne you can find yourself in the middle of the road with traffic wizzing past on both sides – and getting to these stops means crossing busy streets. Melbourne trams are fabulous – but their tram stops can vary a lot in the experience they provide. 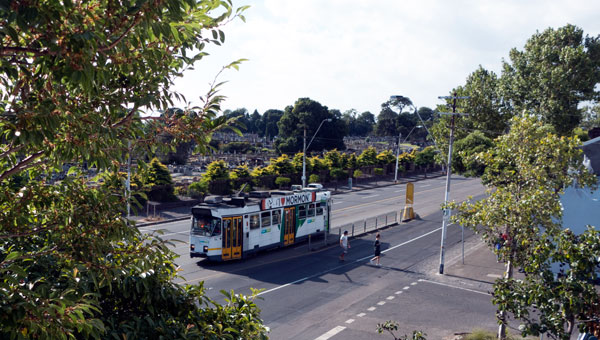 The new stops in Canberra will mostly be on green spaces down the centre of the streets – so traffic should not be a problem – which means there is scope to be adventurous with the design.

Of course Canberra did have those iconic concrete cylinders for bus stops – some still exist but I think they are gradually being taken out. We got used to them and can now appreciate that they had more character that the standard metal and glass bus shelters that have been replacing them. 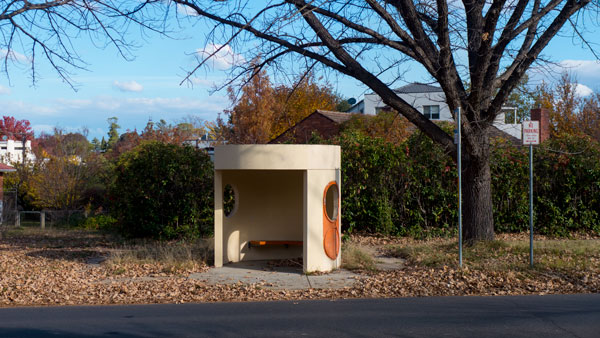 Last week the ACT Government announced that it was asking for feedback on the design for the twelve tram stops from Gungahlin to Braddon. Having read the article and done my best to interpret all the stuff on the NCA’s website – I think this means that it is to be the same design for all of these stops – presuming there is something different for Civic (yet to be disclosed).

If so, that puts a lot of significance on the design of these pieces of very visible infrastructure. It is going to be very important that they are designed as part of the entrance to Canberra along Northbourne – being a main entrance point to the National Capital.

And if they are to be seen all the way from Gungahlin to Braddon, the design should be something very distinctive that should become something that locals get to be proud of and visitors admire and take that photo to send onto others.

And just to be pedantic: The images as provide include lots of fully grown trees that soften the viewing of the design for the tram stops.

The reality will be that those new trees will be much smaller for many years. The tram stops will be very visible and very dominant for the decade as the trees mature to be as shown in these images. This is even more reason that the design has to be something special – not ordinary.

Below is a couple of the images of the designs – plus I have cropped and blown up the image to provide a clearer look at the proposed tram stop. 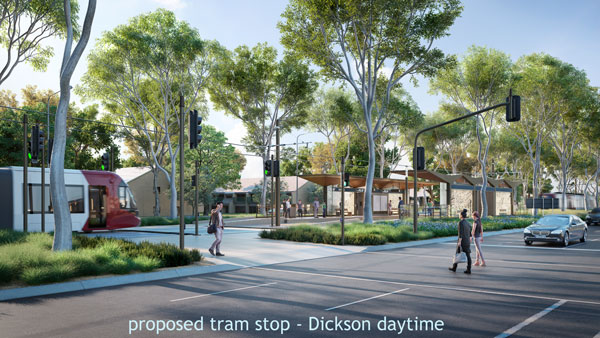 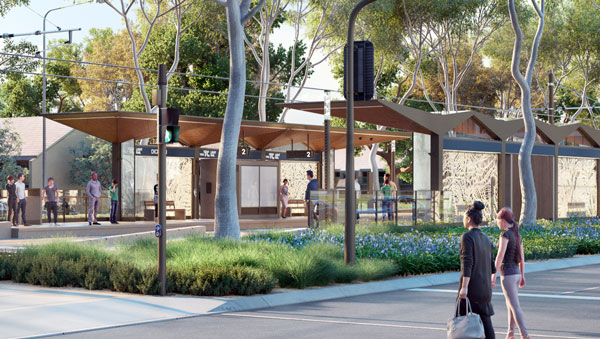 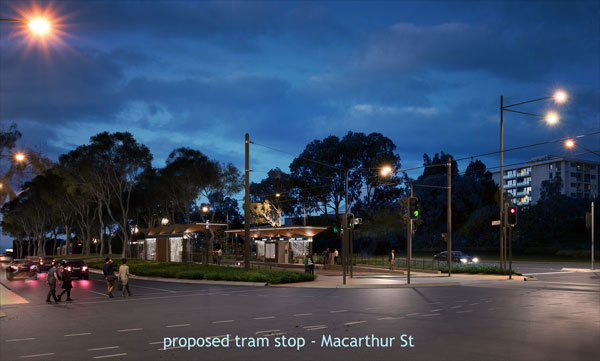 My reaction? They are not very interesting – in fact they look very ordinary – not exciting – very bureaucratic basic –  not something iconic or innovative – not something that says Canberra the bush capital – nor something that would become a subject for tourist photos.

They look as though they could be from any city – with nothing obvious that makes them local or even Australian.

The artist-designed panels look good (I am guessing from what I can see) but they do little for the overall design of these shelters.

The present design will provide very little protection during bad weather. This fault will discourage people from catching the tram on days of inclement weather. There is ample room for better shelter arrangements than has been provided by the design as published.

Again – when you take away the tall trees – they are nothing special. Not good.

I think we can do a lot better for something that will be a very significant part of the new tram line along the new Northbourne Avenue into the nation’s capital as well as being repeated all the way to Gungahlin.

This new tram stop design for the twelve stops is open for comment until 2 June 2017.