Damon Young, Philosophy in the Garden 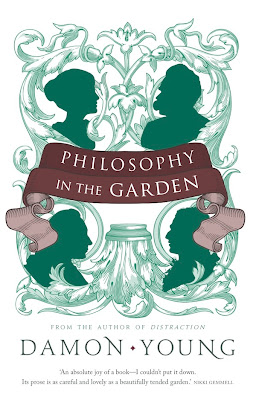 From Damon’s own blog:

Damon Young explores one of literature’s most intimate relationships: authors and their gardens. For some, the garden provided a retreat from workaday labour; for others, solitude’s quiet counsel. For all, it played a philosophical role: giving their ideas a new life. This book reveals the profound thoughts discovered in parks, backyards and pot-plants. It does not provide tips for mowing overgrown cooch grass, or mulching a dry Japanese maple. It is a philosophical companion to the garden’s labours and joys.

Yes Indeed, this is a book to be enjoyed by those who enjoy their gardens.  Why do so many of us enjoy our gardens? What is it that so many people look for when out in the garden or simply contemplating the concept of their garden or even have plants on their balcony or in their rooms?

Many professions involved with our outdoor spaces have fallen for the fashionable behaviour of looking down on garden design as being something below their intelligence and lacking in real design challenges. Likewise there are far too many garden designers and contractors who have very little concept of the health and stimulation importance of a good garden beyond being an ornament and superficially attractive.

I have often stated that much of our attention to deal with climate change should start in our own backyards. Now I see that Voltaire stated ‘Let us cultivate our garden’. According to Damon Young, Voltaire argued that the world was marred by misery and cruelty and no benevolent, all-powerful god would ever arrive to tidy up the mess. Nature gave humankind reason and hope, and it was up to us to improve our lot. Instead of toying with grand philosophical systems, or becoming mad with power, we ought to start within our own sphere of influence: our marriages, children, towns and humble backyard.

It was a visiting Chinese academic who I met in recent years who talked about how contemporary Chinese gardens were now superficial. He said that most were now simply fashionable ornaments. He was not only referring to those Chinese gardens in the west, but to most back in his own country. Likewise I consider that the artificial approach of many contemporary designer garden television programs encourage a certain level of superficiality.

Many of us enjoy the garden, being our own private backyard, as well as the many varieties in the public realm. I love to wander a good park or botanic garden. And I like the fact that the National Botanic Gardens here in Canberra has lots of seating scattered throughout.

Nature and our national environment are not to be controlled by the one species, being us humans. Nature has its own unruly methods of survival. Gardens provide us with this lesson. I am not convinced that some of the contemporary hard edge designed parks, large and small (pocket parks), have as their core reasoning to be ‘a sense of place’ for so many individuals who wish to enjoy the constructed environments of gardens and parks.

I suggest that some of these fashionable landscape designers and architects are in denial of nature, or maybe simply ignorant of the historic connections between parks, gardens and the citizens who roam amongst them.

The more recent contemporary botanic gardens such as the one at Cranbourne in Melbourne, seem to me to more of a landscape designer’s futile efforts to demonstrate that nature should be contained and controlled. These museum pieces are no longer gardens that most visitors would regard as places of solitude, as places for contemplation, as places for engaging in complex or even simple philosophical thoughts.

They are  what they have been constructed to be, highly designed fabricated open air museum pieces. I could be so cruel and even suggest that this current movement by some of our botanic gardens is a move towards attracting more people by having open air fun parks, a form of Disneyland, disguised as botanic gardens. (There’s a new one in Singapore that I will talk about one day soon).

Tourist destinations such as Cranbourne, and there are others I can list, are to be visited and admired for what they are. I visited such places and usually enjoy them as I do other museums and such special displays.

Most people I imagine would be happy to do so, to visit such places as Cranbourne, at least once.  Many more return time and time again to the open style botanic gardens and other parks for a range of health and social and enjoyment reasons. Most are then eager to return to their own gardens and to once again enjoy the complexities of our own constructed corners of nature. We return to our own battles with nature! It never ends and that is the joy of it.

In Damon Young’s book he outlines how so many writers and philosophers have also had their own private experiences with some form of gardens, be it real, imagined or even token (being a bonsai tree or two).

And to push you over the line to enjoy Damon Young’s book, check and enjoy the table of contents:

Here’s a review here by Peter Timms, who also has written about such things as the backyard. Peter provides a great introduction to the various chapters and as usual some thoughtful insights.

And here’s another review, this time in The Australian.

Final note, you do not need to know your philosophy or philosophers or writers to read this book. But be prepared to learn more about them in the process. One could speculate that Damon Young has used the garden as the enticement to bring us over the line into his world of philosophy.

Now to read: Damon Young’s Distraction: A Philosopher’s Guide to being Free.