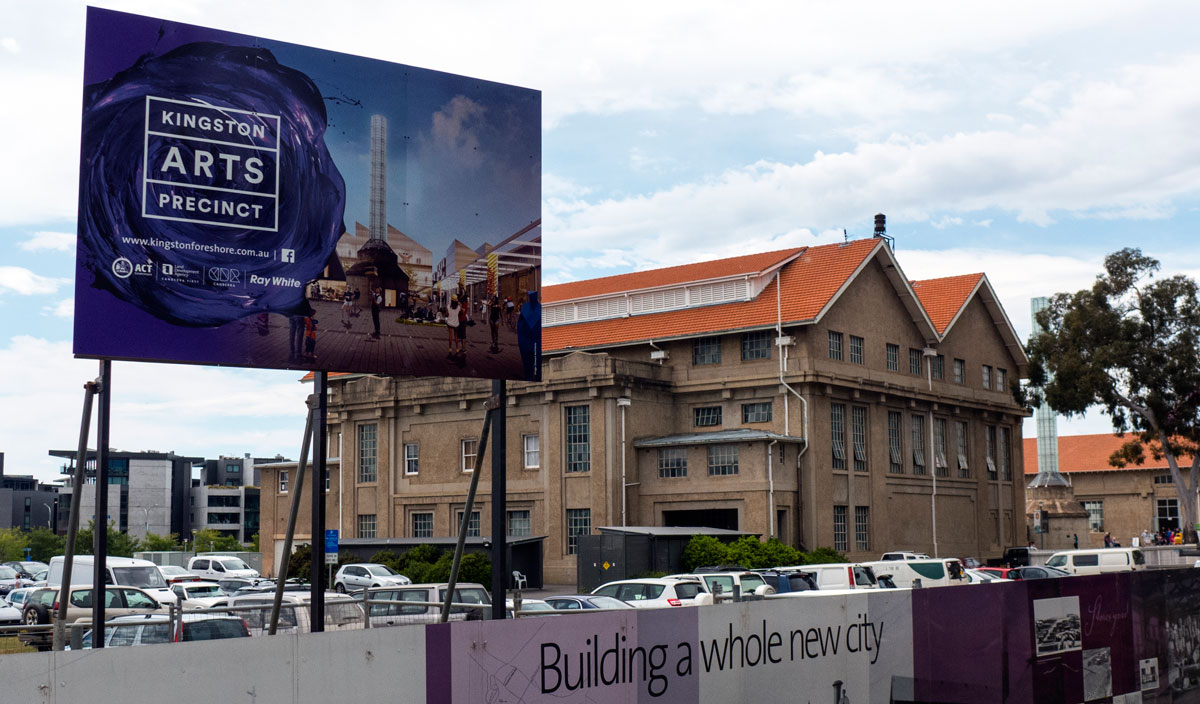 The message was that the developer, Geocon, was longer involved with the development of the long-awaited Kingston Arts Precinct.

From here on the SLA would be taking over and things would restart soon. The finish date for the project is now sometime after 2025.

The curiosity was why this was left to a communications officer to be talking to resident’s groups. One perception was that the SLA does not take residents seriously and senior staff are busy with more important stuff.

Another version was that the messaging was carefully constructed to avoid the obvious – that no-one in the ACT Labor/Greens government was going to take any responsibility for the failure to deliver.

Just to remind everyone, this project has been around since about 2005. Somewhere around 2012 there were major announcements about getting it underway. In the end, the biggest thing that happened were the signs erected on the site.

The developer was engaged in 2017. The arts groups involved signed a confidentiality agreement not to talk about progress. The local residents were frustrated by the ad hoc nature of the development and the secrecy about what was happening.

The developer had stated that it was to do the master plan for the site. That statement told the residents who will be setting the priorities.

There are heritage buildings and significant landscapes involved with this site.

Despite the occasional slick presentations by smooth-talking consultants and architects, the voices of the local residents and the heritage sector were sidelined.

Reactions to this latest announcement are positive as there was little evidence that the project as it was being managed was going to deliver for the community or for the long-term viability of the arts sectors involved.

Another curiosity in the announcement was that the SLA would now be handling the project. Given that the SLA was already the ACT government agency handling this, what did that statement mean?

Internationally and elsewhere in Australia, the bringing together of developers and arts organisations to form arts precincts has had very mixed results. Many have failed. Those that have survived have involved long-term and significant commitments by governments that have put a priority on arts and cultural activities and facilities.

It may come as a surprise to some, but more often than not most (not all) developers have making loads of money as their top priority. Anything to do with the arts is often window dressing to make them look more humane. It does not usually work out.

The ACT government has a mixed reputation on its understanding of the value of arts activities and the provision of facilities (talk to the Woden community). They often say the worthy words – but do not follow through with appropriate commitments and actions. Is the ACT government going to commit serious resources to this centre’s future?

For the Kingston Arts Precinct to be restarted, the first things would be to engage honest brokers to conduct the consultations. Please do not roll out one of the usual suspects – being the slick and smooth-talking planning and architectural consultants. Enough is enough!

Another priority – the obvious one – is to ensure that everyone who should be involved – is involved. No more of having the chosen few inside the tent and sworn to secrecy.

When a developer is engaged to develop any parts of the Kingston precinct, they should not be setting any agendas for the arts precinct and the heritage sites.

The focus of the arts precinct project managers should be about the cultural life of the city, the interactions with the local residents and the viability of the arts organisations to be on the site.

There is no other way to describe what has happened to date. It has been shambolic and mismanaged. Alternate facts and secrecy should be a thing of the past when it comes to how the Kingston Arts Precinct is to be handled from this point forward.

Those interested in the arts in Canberra and local residents look forward to the restating of this central Canberra cultural initiative. It could be and should be wonderful.