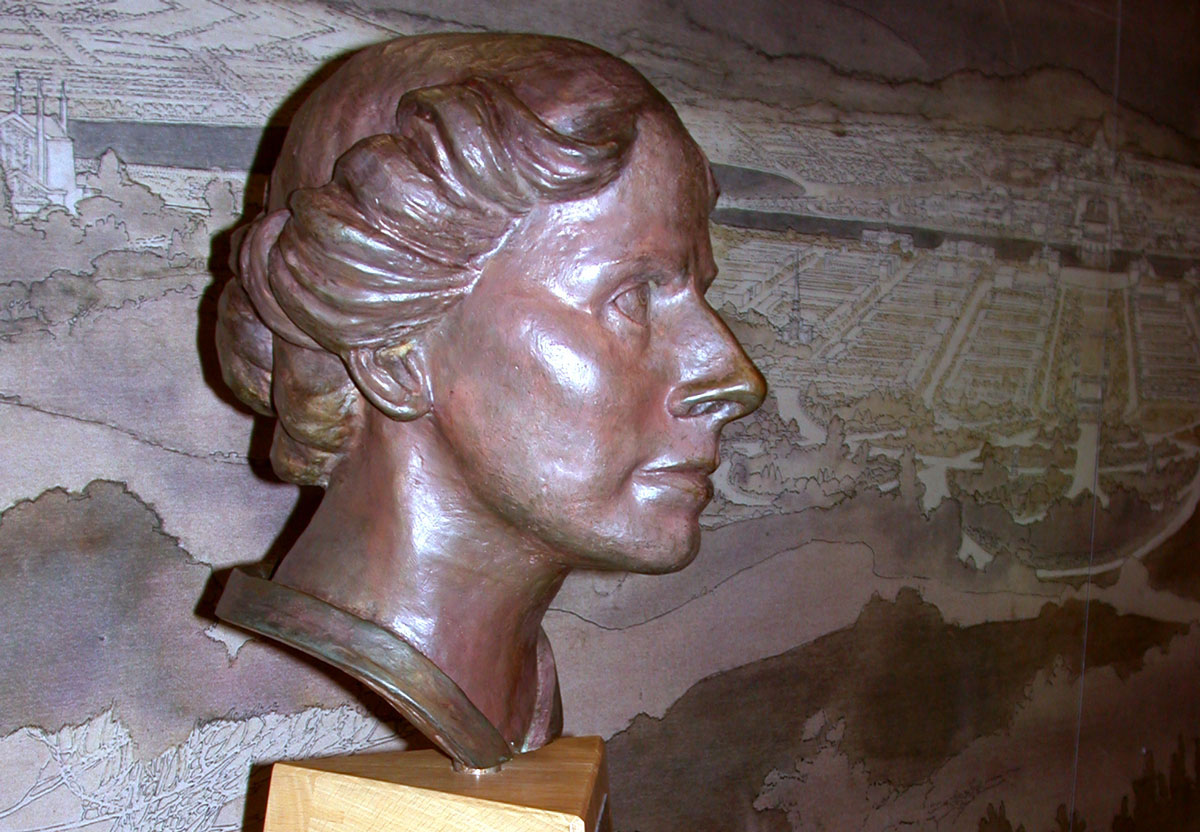 It was stunning to see the images of Premier Dominic Perrottet after NSW opened up on October 11; he welcomed people back to his version of normal – that of blokes, pubs, beers and more blokes. Women were absent.

This fundamentalist neo-liberal warrior did not see the problem with the image he was projecting. The state’s second female premier, Gladys Berejiklian, was history. The boys were back in town and business groups such as the NSW pub industry were in charge. Was this a repeat of Sydney’s 1808 Rum Rebellion?

In February the National Capital Authority was keen to promote the role of Marion Mahony in designing Canberra. Its media image was of three people standing on Mount Ainslie with the head of Marion Mahony Griffin on a plinth.

The photograph above of that same head was taken much earlier in the NCA’s Regatta Point exhibition rooms. While there were talks and other events about Marion, nothing permanent seems to be on the cards. Carting her head to the top of the mountain was meant to signal that the NCA was taking this issue seriously.

This lack of commitment has been highlighted by students from Canberra Girls Grammar. They are part of a new 2021 program: “The House, Women in Politics and Government”. The students are also campaigning to honour Julia Gillard, Australia’s first female prime minister. They have also noted the inequity with how women such as Marion Mahony are not represented in the public dialogue and through public memorial statues. Check out their campaign – Google: Statue Pitch-CGGS.

Another initiative worth mentioning is Jasiri Australia – a social enterprise working to give young people the tools to be courageous leaders in their lives, communities and the world. Their website includes an image of a young woman presenting an uncomfortable Scott Morrison with “The Young Women’s Charter for Australian Democracy”.

One obstacle to a better representation of women in the public arena is the simplistic argument that women have historically been in the minority in leadership. Short response: yes, they have because of the male-dominated societies of the past and because men have largely written the histories and often downplayed the role of women.

Any of this should not be a hindrance to today’s more progressive authorities promoting the work done by society’s many talented and professional women. They could start this by doing something about the huge inequality in representation in public art.

While efforts to better represent Marion Mahony are yet to be delivered, recognition is being provided nationally to Enid Lyons and Dorothy Tangney. Both were elected to the federal parliament in 1943 and helped change views about women being successful political representatives. This is a good start. But remember it is 2021, and how long have people been asking for such initiatives? And how long before more get rolled out? Do we wait again until someone protests about the lack of representation?

The ACT government describes itself as being progressive. That’s their description not mine. But giving them the benefit of the doubt, surely they can see that having statues and monuments around the city dominated by blokes, animals and other stuff, does not encourage young women to take significant roles in society.

The statues of Enid Lyons and Dorothy Tangney are federally funded and will be important nationally. However, the ACT Labor/Greens coalition government continues to neglect its responsibilities to use public art to encourage women into public life.

With one female state premier left and men dominating positions of power across the political spectrum, including by having male leaders of ACT Labor and ACT Greens, the time is overdue for more action on equity on a number of fronts including in public-art representation.

Is there anyone in the ACT government who has the aesthetic interests and the commitment to future generations to make such a well-funded and well managed program happen now – and not wait to make some of the usual never-never promises leading to the 2024 elections?