Planning and Development of the Dickson Shops 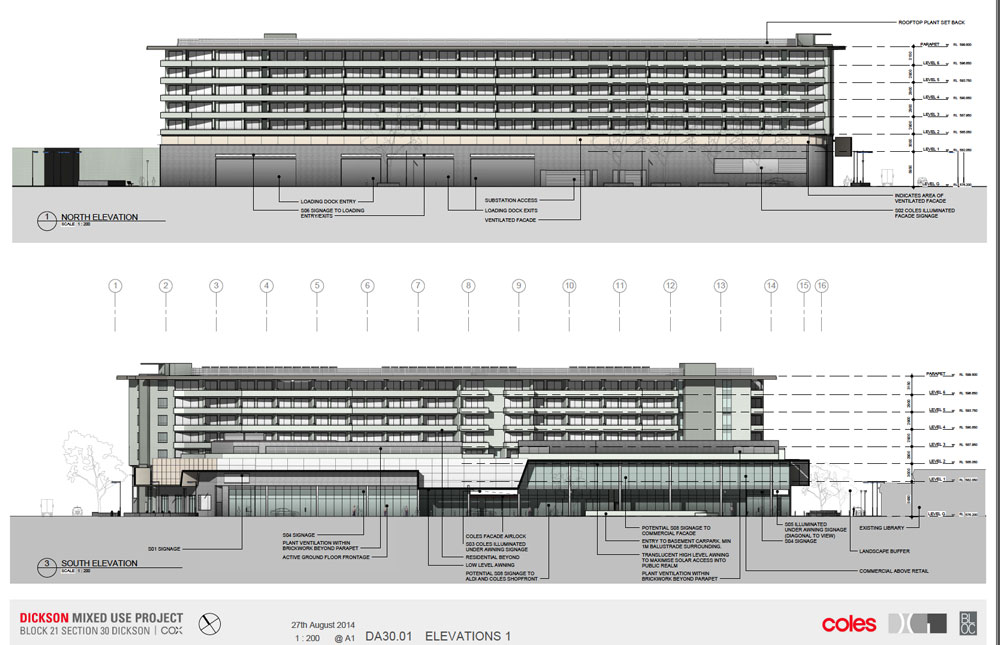 It was just days before Christmas (2014) when local residents may have noticed that a development application with big ramifications for their precinct was now available online for comment – with a month in which to submit any comments.

Yes it was Christmas, and yes most residents were to be on holidays, and yes many residents are on the planning authority’s email list – so they could have been easily notified of the new development application.

A Response to the Proposed Development Application

This planning authority does nothing to improve its reputation. Were the residents notified directly? NO.

Given the seriousness of the development to the local communities, did the planning authority (ACTPLA) see any problems with sneaking the information online just before Christmas? NO.

The development Application involves making your way through 91 separate documents. Did ACTPLA think that maybe they could provide some easy access to the most relevant information? NO.

Is this a successful case study in how to communicate with local communities? NO.

Does this indicate that ACTPLA believes in community engagement?   NO.

Does this indicate that the ACT Chief Minister through ACTPLA believes in working with the local communities on major projects such as this?   NO.

Is this a benchmark case of how the new ACT Chief Minister intends to keep his local communities offside?  YES.

What are the Residents Getting out of this?

Despite the glossed up image presented with the plans, does this metal and glass box have any outstanding architectural features? NO

Is the new building going to be an exciting piece of design? NO

Are there solar panels across every available roof space? NO

Are there integrated water saving features built into the site? NO

Will the residents have to rely on high energy usage to cool and to heat their units? YES

Does this development increase the levels of green infrastructure in the precinct? NO

Will this development contribute to an increase in the heat island effect in the precinct? YES

Does this environmentally unfriendly building mean that people will continue to be encouraged to drive to the shops instead of walking, cycling and using other means? YES

Does this illustrate that the ACT Chief Minister and his government is really serious about environmental issues and is serious about addressing climate change issues? NO 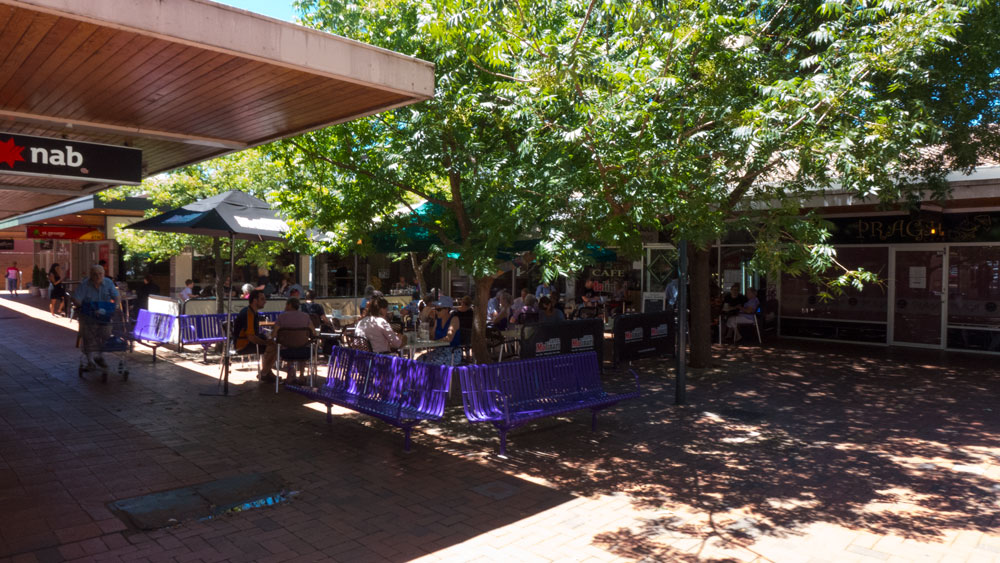 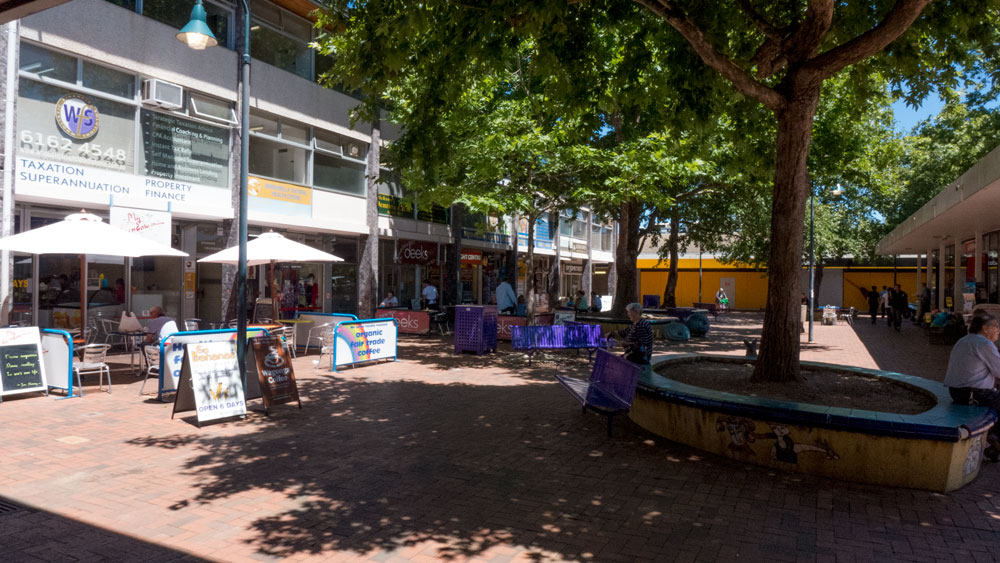 The Dickson shopping centre has a very attractive ambience with effective use of open spaces and trees around the shops, the library and the many cafes. Will the new development contribute to this ambience? NO

Will the new development have a negative impact on the local small shops? YES

The original policy on supermarkets was about providing alternatives to the dominance of the major supermarkets. Will this new building provide any real alternative? NO

Does the arrival of the new supermarkets continue the dominance of the usual players? YES.

Has the ACT Chief Minister and his government demonstrated clearly that they are committed to providing real alternatives to the dominance of the big supermarkets?  NO

There are  many developments planned and being canvassed for the Dickson Precinct. In the illustration below, the main shops are purple and the proposed new supermarket is blue (in the centre).

Section 72: The Dickson Parklands: There have been discussions about developments for these parklands, which is the highlighted green space to the right in the illustration above. The residents have attended meetings to find the real agenda is to allow the unions, who own the leases on the central buildings, to have their leases converted to allow for high-rise residential developments. The residents have expressed passionately that they would like this site for enhanced parklands and community cultural use. click here

The Dickson Drain: There have been many requests for the Dickson Drain alongside the parklands and shops to be converted to a linear parkland. click here

Commercial Centre:  Residential developments are planned for the North end and southern end of the commercial centre which is the pale blue area to the west of the shops above.

Northbourne Ave: This main avenue is to be developed with more high-rise on both sides with loads more residential and more commercial developments.

Therefore the questions are

Has the local communities been involved in discussions about this new supermarket development in the context of all the other known proposals for the whole precinct? NO

Has the Chief Minister and his government responded positively to the often put request that planning for the Dickson area should be discussed in the context of a larger Dickson Precinct Plan? NO

Does all this ad-hoc planning and development increase the confidence of local residents in ACTPLA and other government development agencies? NO

Would local residents welcome a new style of planning and development agency based on community engagement and community development rather than one that has the perception of being the puppet of the development lobby? YES

The usual mode of operation for this government through ACTPLA is not to enter into friendly and transparent negotiations with local residents, they prefer instead to demand that residents respond to complicated development applications, and then waste huge public resources in fighting residents through the Administrative Appeals Tribunal.

Is it even feasible, given all the quagmire of bureaucracy surrounding developments around Dickson, that residents can expect that they will able to make any meaningful contributions to the latest proposal for new supermarkets in Dickson? NO.

Does this latest proposal for the new supermarkets in Dickson signal that the Chief Minister, his government and his ACTPLA, are interested in a more open and friendly process of engaging with local residents? NO

The above photo – taken 15 Jan 2015. The one below taken by Peter Wille soon after the building was opened. 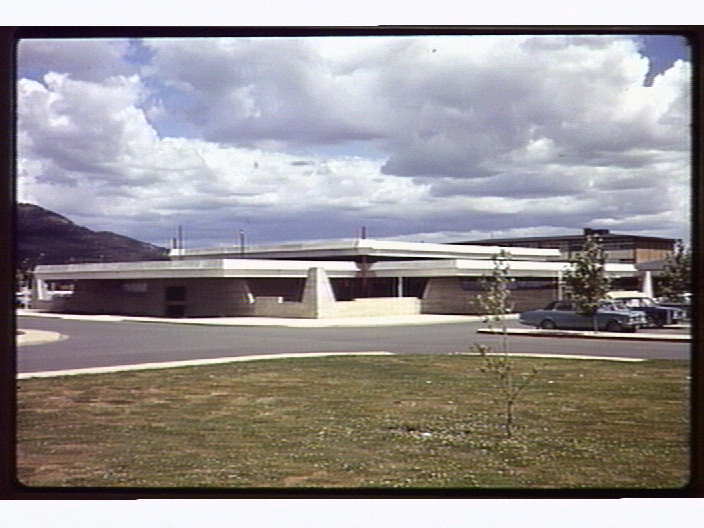 Do the residents love their library? Yes – click here.

What a shame that in years to come people will wonder about the lost opportunity to build a building on the proposed site that could have been a significant architecturally welcoming statement and one that would have included contemporary elements to address climate change, to encourage alternative uses of energy, that would have also incorporated landscape features to enhance the green infrastructure of the precinct.

Has this whole exercise been a lost opportunity for the Chief Minister to contribute to good urban design, to environmental issues, and to engage with the local communities? YES

Is there any sign yet that residents are being taken seriously in their wish for precinct planning that enhances the Dickson Precinct? NO – but we remain optimistic!

For the record,  here’s a PDF of the page with the 91 documents – click here.

There must be a better way for the ACT Government to handle planning and development.