ACT Greens throw stones at themselves! 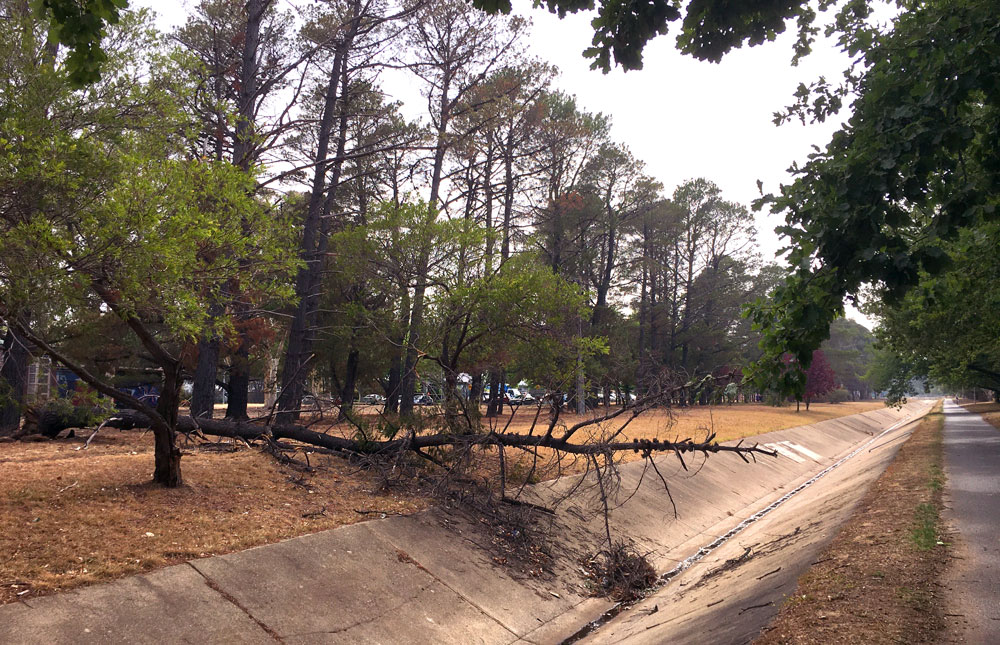 A tree came down earlier this week in Dickson (above).

Looking at the trees nearby, it will not be long before more of these trees meet a similar fate.

Across Canberra we now have many trees under stress, many near dead and many just waiting to fall. (image below – dead tree in Belconnen)

The ACT Greens have been part of the ACT Greens/ Labor coalition government since 2008 with Shane Rattenbury having senior positions within the government. He presently holds down a ministerial position within the cabinet where all key decisions are made.

With the Greens embedded within and enabling ACT Labor to form government, one would think that trees and biodiversity would have been a top priority and the consistent diminishing of our tree cover would have been halted by now. Not so.

Instead this week we also had the ACT Greens come out with a shock-horror media release that the “government” had failed to insist on the target for 30 per cent tree cover in the new suburbs.

What the hell is going on? Are the ACT Greens not part of this government – do they not enable it to do what it wants?

This is business as usual with a few attempts at outrage by the ACT Greens.

The planning directorate is expert at having worthy-sounding planning legislation that has proven to be superficial and a waste of space.

Into this contested space last year, the ACT Greens backed a set of environmental policies that have already proven to be very porous and look as though they will enable developers to deliver much the same as before.

This means that the policies that Shane Rattenbury boasted about late in 2019 are indeed full of worthy statements but are lacking in real commitments.

This has proven so by the planning directorate’s most recent proposed variations to the legislation that will deliver few changes in the new suburbs to tree coverage and biodiversity when compared with what we now have in recent suburban developments.

The media release by ACT Greens sets out their shock at this action by the planners – who work for the government that is a coalition of the ACT Greens and ACT Labor.

Are the ACT Greens shocked by their own behaviour and the behaviour by the planners that they have enabled? I doubt it.

To add to the questionable media release, that same document then goes onto ask for donations to assist the ACT Greens in this election year. Best of luck with that!

Tree coverage is serious. Losing trees can be avoided. The ACT Greens need to get real and deal with the real world instead of pretending to be shocked – which is more about them trying to be different from their Labor coalition partners. For the moment, there is no difference.

Canberra voters have a problem when it comes to identifying who is genuine about trees, green infrastructure and biodiversity.

That media release was a shocker! Let’s hope we see no more of such silliness.