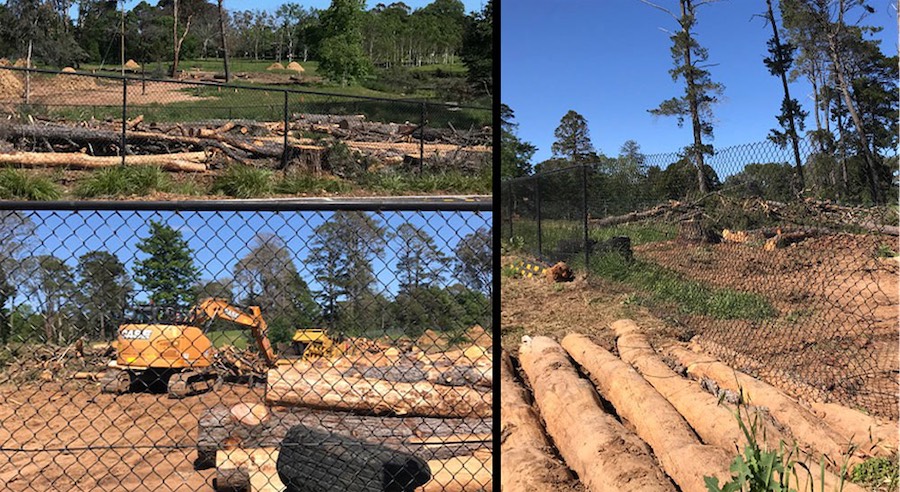 In the lead up to the October ACT election, trees were an item of interest to anyone wanting to be elected.

Trees were going to pop up everywhere, possibly even in the kindergarten lunches courtesy of the Liberals. A million there, a million here and more anywhere the voters wanted them to go.

Over at the Yarralumla dog park, those who know better decided that some of the established trees were in trouble. The park was closed to make way for the machinery and squads of tree loppers.

To the surprise of locals, about 90 trees came down, not just the “some” that was indicated on the signs and notices. Keen locals noted that many of those hitting the dirt looked very healthy – healthy enough for the wood to be sold for other uses.

As one learned local put it, this was a planning mess from the first decision to turn an historic established wooded area into a dog park. There was minimal planning from the get-go except on fencing and making up some basic rules.

It should have been obvious to any tree specialist or planner (remember them?) that there were going to be serious impacts on the established greenery. As for the chainsaw gang being allowed to chop down so many is beyond unacceptable – except maybe to those comfortably ensconced within this Labor/Greens coalition.

How trees and shrubbery remain at risk due to simplistic decisions remains the norm for this government’s bureaucracy – and therefore the ministers responsible. Yes – we are looking at you Rebecca Vassarotti, ACT Minister for the Environment.

Before laying the boot in for not caring for green infrastructure, let’s not forget the words of the ACT Liberals going into last year’s election. If they were genuine about caring for the environment, trees and biodiversity, why then are they silent while this government’s bureaucracy and the developers carry on doing what they do – removing greenery, especially old-growth trees.

What have we heard from the ACT Liberals about how much biodiversity disappeared as the City Renewal Authority’s bulldozers knocked down hundreds of trees along the West Basin foreshore and parklands?

As any resident will tell you (if you ask), in established neighbourhoods many developments are knock-down rebuilds that include removing everything from the property before it is sold and redeveloped.

Take a drive around Campbell and observe the slow changes to what was once a suburb oozing with greenery and biodiversity. Anyone for another grey, oversized monster with a few ornamental shrubs?

The ACT Greens should now be in a position to be boasting about their version of a “Green New Deal”. The best they came up with was that annoying slogan “Building a Better Normal”. This dodgy approach of avoiding commitment is reflected in their agreement with Labor. That long document has many wonderful-sounding aspirations. Much of it is what anyone should expect of a local government doing a basic job in 2021.

But as for taking a new approach to climate change through making sure that this city’s heritage, being the urban forests and the biodiversity, is being enhanced through a whole of government approach – forget it. Things are being done as they have always been. Need to have a property cleared – go for it and wipe out everything and fill in the paperwork afterwards. This remains the standard now accepted for suburban infill developments.

Elsewhere, climate and biodiversity committed politicians and corporate leaders are starting to be heard. Here in Canberra, our lot remains determinedly wishy washy on real commitment to change.

The clearing of the Yarralumla dog park trees should not have happened. Any decision should have been subject to a whole-of-government approach to climate and the environment rather than a chance decision by a bureaucrat who doesn’t like older pine trees (while so many birds do).

The ACT Greens need to rethink their political commitment that is enabling their bureaucracies to carry on as before. What we are seeing daily is not the better normal anyone should be expecting in 2021 and beyond.