It is not the job a reviewer to write stuff that everyone agrees with. The Guardian has a number of art reviewers and therefore we have a range of opinions. However one would expect any of these reviewers to be making sense.

It has come to pass that one reviewer has been showing signs of stress or something equivalent.

A couple of his recent opinion pieces have wandered into strange territory. The only conclusion has to be that something else is at play here. I am sure that if I could be bothered reading them that there are all manner of rude responses in the attached reader’ responses – however I spend as little time as possible reading these as they are dominated by too many nut jobs.

A recent worrying review by the reviewer in question was his views on the poppies being placed around the Tower of London in commemoration of the country’s war dead from the war to end to all wars, World war One. By all means let’s pay tribute to all the people from all nations. But that is not what this particular memorial was about. Yes, those in the power elites, politicians and media, have exploited this memorial to promote their own version of nationalism and jingoistic responses.

However this memorial was very powerful and very creatively brought the message home to everyone who saw it. And they came in droves, by foot, on their bikes, on buses, cars and on the tube. I witness many on the tube and the occasional bus trying to get to the Tower to catch the memorial artwork. Why the reviewer decided to dump on this memorial remains a mystery. click here.

Then the same guy pops up again with the clichéd views about photography. The logic, or should that be illogic, of his argument took my breadth away. It was as if he was a member of the arts society in 1840 when photography burst onto the scene. His views were so twisted that I considered making a response but resisted as such people should not be provided with any oxygen and any form of promotion. click here.

However eventually one of his own colleagues on The Guardian could not resist and had a go at responding. He more or less made the point but may have been just a little too polite given the stupidity of the former comments. click here. 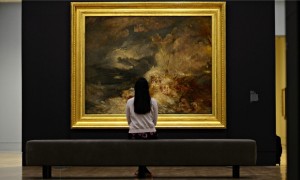 The reviewer could not just celebrate the current attention to Turner. Yes there is yet another exhibition and there is the very popular movie released in 2014. His argument being that Turner is getting too much attention at the expense of so many other great artists that could be celebrated. Click here

Hmm. I think that is a silly argument. I am sure at various times the works of Constable, Hogarth and other boys have received appropriate attention. Just that everyone enjoys Turner and this year we have the opportunity to enjoy his work again.

As it happens I was in London and made my way down to The Tate. I happen to love Turner’s works. This exhibition was a great experience. The surprise was that it was not too crowded so I was able to spend more than ample time with many works. A real pleasure. The curatorial team did a wonderful job with this hang.  I am yet to see the film.

I found this promotion online for the exhibition.

A footnote on Late Turner at the Tate (entrance fee applies).

After the exhibition, remember to walk upstairs through to the Turner Galleries. There are heaps of his works still on exhibition as part of their permanent exhibitions of Turner. And there is no entrance to these galleries.

As for the reviewer in question, one hopes he has a merry Christmas and finds his mojo again. Many of his reviews over the years have been great reading.  A peaceful holiday hopefully for him and the return to great reviewing again in 2015 and beyond.