Comment: while Clive distracts, this foul government moves against refugees 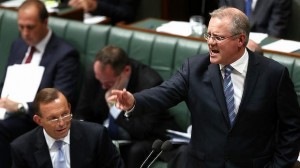 This country via its elected government has moved to do the unthinkable.

While we all thought that our government was already dealing out extraordinary cruel treatment to people who have had to leave everything and seek asylum in Australia, the Immigration Minister has proposed more foul legislation for Parliament to consider.

In the last days of the sitting of this parliamentary session, while Clive Palmer has been the subject of most of the journalists’ attention, a few have made sure that this latest foul deed was being reported. There are not many of these reports – here’s two: One here – click here; and a second – click here.

Next time you think how dreadful some other country is treating either its own or other people, think again about these deeds being proposed by this Australian Government.

This is a government most foul!