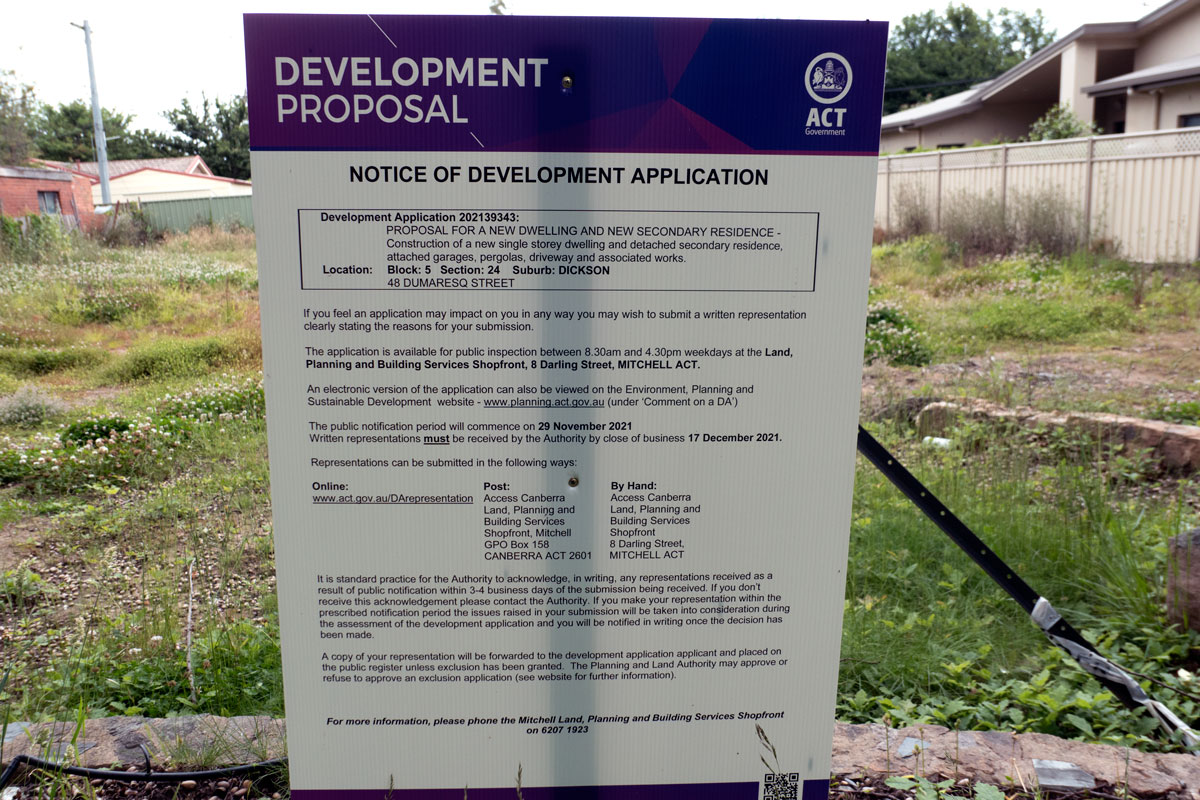 It has been said many times that if people were to vote for the Canberra Liberals in the 2024 ACT elections, it could not be any worse than the developer-focused, neo-liberal approach to planning and development being delivered by the conservative-leaning ACT Greens and Labor.

Under the influence of Zed Seselja and his loyal party members, the Canberra Liberals established a fringe-conservative profile. This despite the reality that it didn’t match the larger political aspirations of the city.

Seselja failed as ACT opposition leader – particularly with his shouty and nasty campaigns about rates and then over the first stage of the tram. Last Saturday came the message that he was no longer fit for purpose to represent the territory to the Senate.

People will soon be pondering where do the refreshed Canberra Liberals stand on key local issues –particularly planning and development?

When federal Labor announced an increase in public-sector employment matched with the reduction of outsourced consultants, the Canberra Liberals saw this as an attack on local jobs. Really!

Then in the last week of the election campaign the former government committed to cutting public service jobs. The silence from Canberra Liberals was deafening.

With the ACT government’s shambolic planning reform charade underway, the Canberra Liberals have not presented their alternative. For the moment their silence is taken as an endorsement equivalent to the ACT Greens seeing nothing wrong with the developer-driven emphasis as presented by the planning chief.

A fortnight ago community groups realised that the planning directorate had fiddled with planning Variation 369 that was to deliver more greenery to suburban developments. In its new form it will be near to useless.

The ACT Greens are doing what they do – having conversations – no urgency to fix this. The Canberra Liberals are sitting on the sidelines.

The ACT government has doubled down on the disadvantaged, especially older women, with notices to 300 plus housing tenants to relocate.

ACTCOSS and community groups have spoken up. There was an initial response from the Canberra Liberals – but nothing more has been heard from them about standing up for people who thought they had a home for life.

In opposing the Gungahlin tram the Liberals did not pursue this intelligently. Their case against was just as invalid as the government’s case for that first tram.

A better campaign may have convinced the electorate that the tram was at the detriment of key government programs – as well as wrecking the bus network.That tram line is reasonably successful for the corridor it serves but the damage to other programs continues.

There has been no sound case put forward by the Labor/Greens government on the West Basin tram, the super-expensive wrecking of the London Circuit network, the development of West Basin and the tram to Woden. The planning for the massive developments being proposed for the southern suburbs is well advanced.

The ACT Liberals have put together their alternatives to the massive damages these projects will deliver to the city. This is partly understandable given the arrogant manner being pursued relentlessly for these developments by the ACT Labor/Greens government.

Their use of disinformation on this stuff is their normal behaviour. The Canberra Liberals have been rendered effectively absent on these issues.

The ACT government justifies their laissez-faire approach to suburban developments with a formula of 70 per cent infill development and 30 per cent in new suburbs. They enable this to be translated as massive over developments and an oversupply of apartment towers.

Do they understand that good architectural and landscape design can deliver a high quality of life together with acceptable levels of infill to established suburbs?

There are many more issues, such as biodiversity and heritage, on which the Canberra Liberals could be working with the electorate to provide an alternative to this out-of-touch government.

Those opportunities have arrived. Otherwise, as with their federal colleagues, they may be overlooked by kitchen table grassroots programs that deliver ACT electoral alternatives to all three major parties in 2024.