How the NCA keeps getting it wrong! 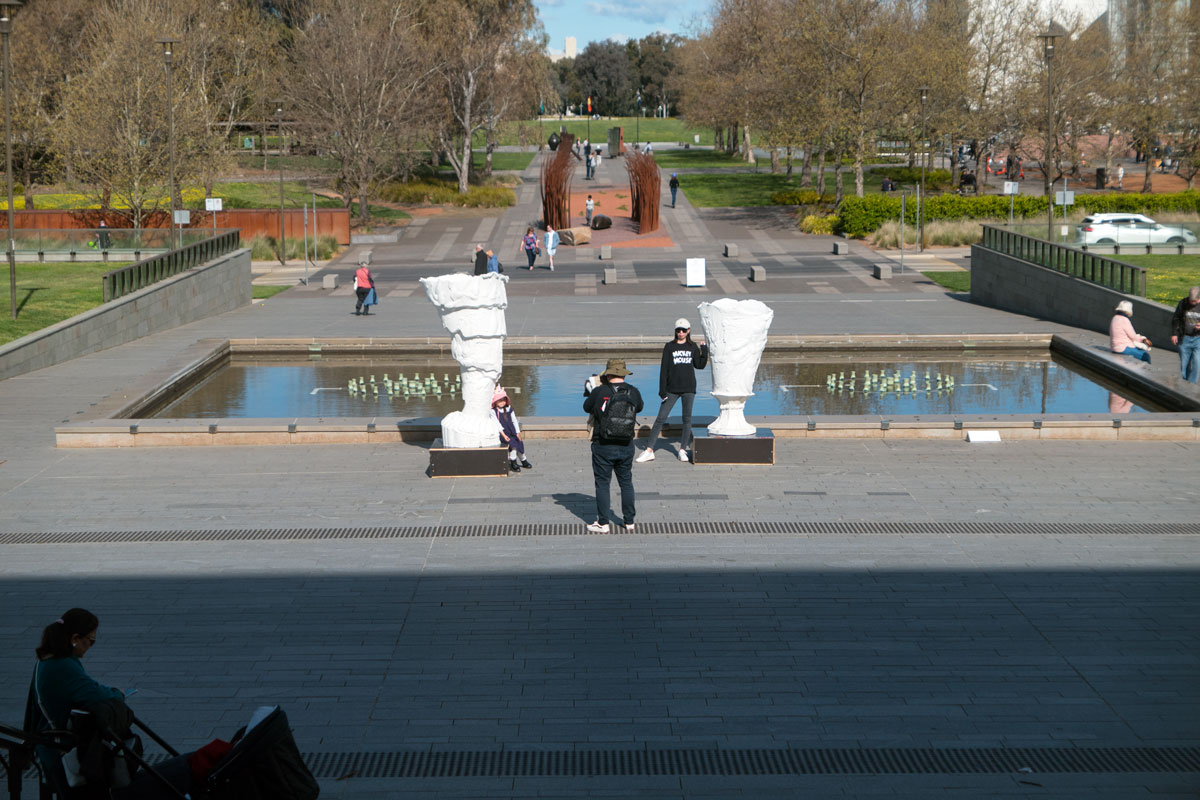 The National Library of Australia forecourt should be a well-designed open space welcoming people to a key national institution. It is, sort of – but not quite!

There are a lot of good things about this precinct, but the current mix of design elements are not coherent and as far as the two significant sets of trees – a case of neglect and stupidity.

Into this space have wandered two pieces of sculpture as part of the Canberra Art Biennial – with others scattered throughout the city. The two at the library are by Bruce Reynolds – titled “Struggle and Fun“.

I observed them for about 10 minutes with the only people stopping to appreciate them were using them as photo-props for travel snaps. Maybe the sculptural works look better when the fountain is operating – but for reasons known to the National Capital Authority – that is not often.

Placing sculptural works in significant public locations can be fraught with dangers when the site has contested issues. To each side of the forecourt are lines of trees that are suffering at the hands of the NCA.

The Lombardy poplars were selected by the original designers to reference the nature of the NLA’s architecture. They are now part of the heritage nature of the building and its surroundings. They have been seriously neglected. Is this how the NCA presents the national capital to tourists? 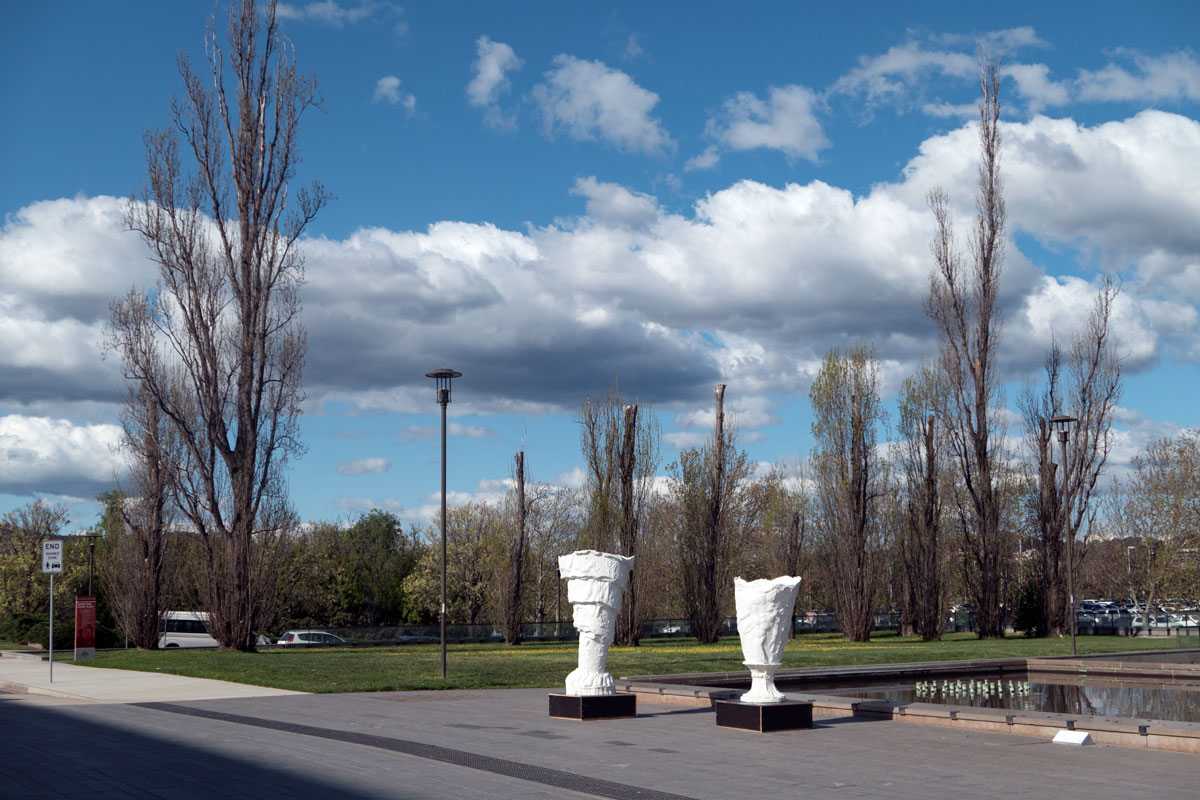 The NCA has announced that the Lombardy poplars have fallen out of favour with the ACT government and, therefore, they cannot replace like with like. They say that with the usual bluster – but not many believe them.

The NCA ignores the reality that there are known fixes that address the contentious issues and that heritage experts have suggested other options – if required. Despite all the common sense that abounds, the NCA has remained cloth-eared to sound advice and evidence.

Based on the latest statements, the NCA is to go ahead with its choice of plants, English oaks, that will be half the size and not have the same “guardian” style.

This stupidity is now what people expect from the NCA on urban design and planning issues within the national triangle. Kristy McBain, the new Territories Minister, seems to have been fooled by the usual bureaucratic spin (nothing to see here) with no positive reform likely – for the moment.

Back to the artwork. I have written previously how the central area between the two bridges would benefit from the introduction of a sculpture walk with temporary works introduced occasionally as part of a festival.

The original 2016 contour 556 program was concentrated around the southern lakeside. The 2022 program has popped up in many sections of the city. The rebranded program, the Canberra Arts Biennial, makes for a different focus. This leaves a vacancy for a lakeside-focused sculpture program along the southern side of the lake – possibly joining up with the NGA sculpture garden. There is also the option of more sculptural works clustered together on the foreshores of other Canberra lakes.

The NCA should have more commitment to cultural infrastructure such as having a permanent sculpture park – preferably where locals and tourists like to wander by the lake.

The NCA needs to get real about our trees and our heritage and do the right thing about the line of poplars in front of the National Library. It’s a heritage and aesthetic matter.

Not too many years ago a former NCA got it right with the areas nearer the Science Centre (see the middle of the first photo above). People wander around the artworks and sit for a while on the benches.

During the recent long weekend, the car parks around the NLA were packed but few meandered near the front of the library. The NCA needs to fix the heritage trees and put in place a new design plan to encourage people to spend time in the precinct.

Meanwhile you are encouraged to have fun by getting around to some of the Canberra Arts Biennial with 61 artists out there somewhere. I am on the look-out for Ian Hubbard’s fun but very serious signs.