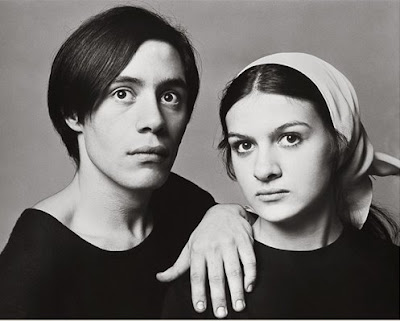 Christopher Chapman of the National Portrait Gallery in Canberra is to be congratulated for curating this exhibition of a diverse range of Richard Avedon’s work.

For people not too familiar with his work, it is a great introduction to the scope of photography produced by this famous artist.

I saw an exhibition of his work quite a while ago in London and I remember at the time that there was too much for one visit. Such full on portrait shows can be very dense and end up taking away from the enjoyment. I enjoyed this Canberra exhibition.

There is a variety of sizes of images from various portfolios, and this definitely adds to the pleasure of the visit as you move through the five spaces of the exhibition. It was very nice to see work that I had not seen before as well as to re-visit some favourites.

The Richard Avedon Foundation has total control of the negatives and as Richard had asked that no further prints be made after his death, it means that the prints we see are as printed by Richard himself, or at least under his supervision.

The exhibition is a very accessible size and this suits the special exhibition space at the National Portrait Gallery.

In putting together this post, I looked online to see what mainstream reviewers were saying. The two main pieces, being from  the Sydney Morning Herald (22 August 2013) and the Australian  (10th August 2013), both seemed to have churned out praise and information based on the press releases from the gallery. Of interest yes. But it seems the art reviewers had no personal comments or new perspectives to add to any discourse on this photographer. Hopefully despite this, the notices brought in a few more punters.

John McDonald in the Sydney Morning Herald (7th September 2013) added some personal perspectives. He curiously talked of what was not in the exhibition and he criticised the gallery for not having a catalogue.  He has a habit of telling you what is not in exhibitions. And I doubt whether the general public would be buying such catalogues in a great enough number to justify the outlay for this exhibition. John forgot to mention the freeby. Being the very nicely produced and informative A4 card with lots of background information on one side and a free image on the other, being Divima with elephants. Maybe John missed out on this freebie?

Now my turn! My favourite on the day was probably the one of Pablo Picasso’s children – see above (note that it takes you to another website). That hand is very powerfully placed and those eyes just ring of their father. Someone told me the portrait was based on a well know painting. The photo was placed very strategically so that you could see it from quite a distance. It could be seen from right down the other end of the exhibition space.

There are many others that I would love to see again. and again.

In some ways this exhibition is not just another Richard Avedon exhibition sent around by the foundation. Such foundations usually package up shows and do not allow for any variations as they maintain total control of how the artist’s work is seen. According to the information circulated by the National Portrait Gallery, this exhibition was curated especially by Christopher Chapman for the venue in Canberra.

The exhibition is not a standard  survey. This is an exhibition of Richard Avedon through the eyes of the curator. It makes for an interesting perspective of the photographer and of the curator given what particular works he has chosen. For instance there are few glamour photographs of women in fashion, which would be the usual for such overview exhibitions.

The whole exhibition has an edge that very much provides an insight into the curator as well as the photographer. It all makes for an engaging experience.  That’s what exhibitions can be about. Well done National Portrait Gallery.