Canberra has a population around 370,000 and consists of a seven residential districts with a total of over 110 suburbs. As with any other city, there are constant tensions about development and planning issues.

However the most publicised debates usually involve proposals to alter any part of the character of  the central districts in and around the Parliamentary Triangle and Lake Burley Griffin. As soon any agency brings forth a proposal concerning these central areas, they are greeted by the usual suspects lining up to voice their opinions. Unfortunately these voices tend to be in opposition and the local press knows exactly who to ring to gather comments for articles that dump on such proposals often before they go out to consultations.

This could be very much a comment about factors around many of these proposals. The agencies with oversight of Canberra’s planning and development are not held in high regard by the Canberra community. Having been through some of these battles myself, I fully understand the lack of trust in the relevant agencies and the way they do business.

I suggest that most of the Canberra residential community would see the local planning and development agency as not working for the longer term benefit of the communities.  This perception is not assisted by the fact that the ACT Government politicians tend to stay away from planning issues and state that the planning processes work well enough. This is not a view embraced by the local resident and community groups. (and that is an understatement!)

The negativity about planning across Canberra is based on a mix of perceptions, expectations and the depth of frustrations many have experienced.

Having poured doubt about the local planning bureaucracy, allow me to be equally sceptical about some of the ‘usual suspects’ who respond to proposals. In particular I wish to focus on the responses to anything in and around the Parliamentary triangle as well as the foreshores of Lake Burley Griffin.

As a starting point I reference an in the Canberra Times, 9th October,  titled Lake battle looms over plan for slipway near peninsula parkland.

Apparently the local Burley Griffin Society had drafted a 70 page document in response to the proposal to build a maintenance facility on the side of the lake. A 70 page document?

The proposed site is in a corner of the lake by the Black Mountain Peninsula. 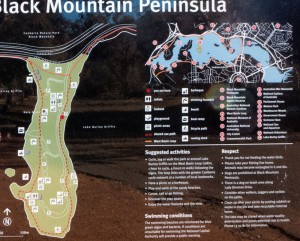 The proposal is for a long overdue maintenance facility and that it will be very much out of sight. Using the map to the left, it is to be located on the left section of the peninsular; therefore to the west side and therefore mostly out of sight. Click on the image for a larger version.

This proposal is for a new facility where there is already a launching ramp and a large shed. I suspect this is a rowing shed  and club house for a local private school.

The peninsular is a fantastic park and used for all sorts of recreation events. I have used it just to sit and look over the lake and to muse on issues of the time. I have been known to take visitors there for a picnic; usually at quieter times.

This is the view I have enjoyed many times. 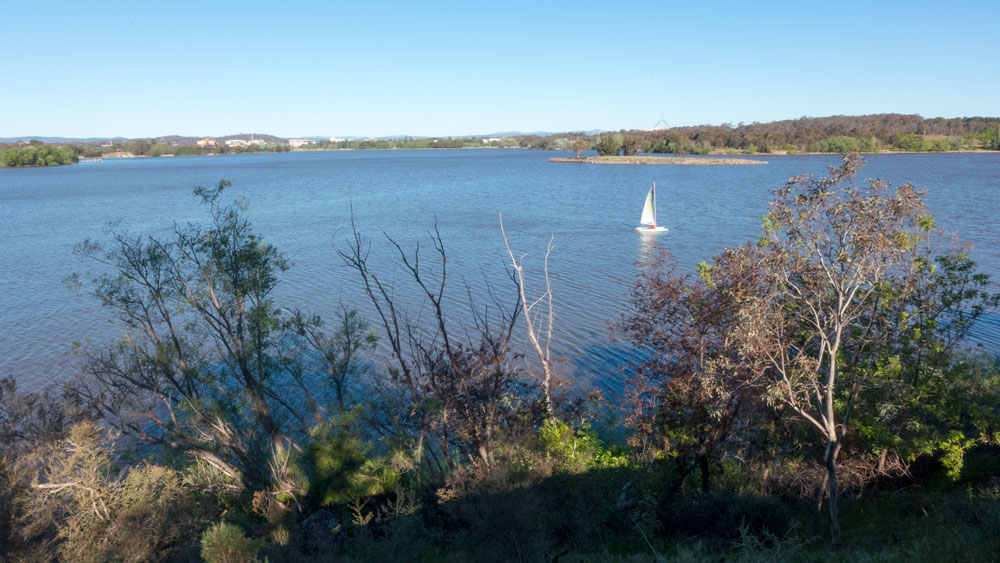 I have also celebrated a significant birthday there not too long ago. And according to the makeshift sign below, someone was doing so last weekend. 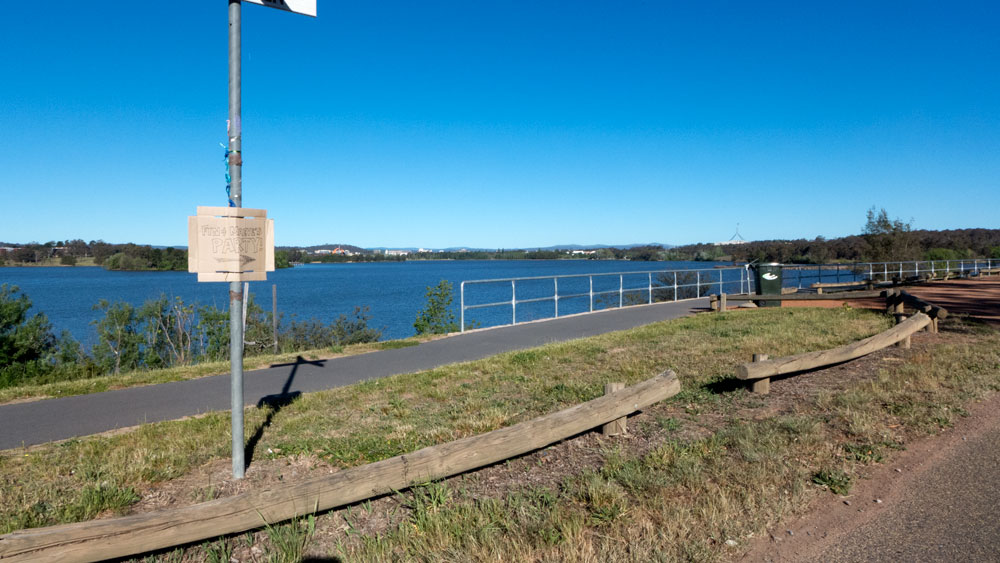 On reading the piece in the Canberra Times I came to the conclusion that the journalist missed a key point that should be raising alerts to anyone interested in aesthetics and good design.

If you have not already gathered, I agree that such a facility is warranted and its placement seems to be more than justified given the extent of the consultations. I identify with the concerns raised about environmental quality, environmental amenity and human health when it comes to developments along the shores of Lake Burley Griffin. These should be addressed in the subsequent design solution.

I have been online to look at the plans and saw the words that ‘it will be discreet, with minimal disruption to the landscape‘. I looked again at the drawings and laughed out loud. Architects use these words often but the reality is usually the opposite or more likely they are just meaningless spin words.

We all know that no much, other than the shed, will be delivered in the end as the landscape works always get cut from the budget when the architects overspend on other aspects of the developments.

The proposed design as offered is not much more than another large shed with greenery that does nothing to enhance the surrounding environmental issues. Surely it is time to ensure that all new lakeside structures actually blend in with the surrounding landscape environment and enhance the visual aesthetics of the area.

By all means approve the proposal but with a serious caveat that a more radical environmental and people friendly design solution is sought. Time to change from the usual architect and get someone with new ideas and integrate this new facility more appropriately with the surrounding landscape.

It may have taken a while to get to it, but the point of this piece is that I have serious problems with the stand taken by the ‘usual suspects’ on this and many other proposals concerning the foreshores of Lake Burley Griffin.

Too many times a certain small number of residents, plus one or two from interstate,  have taken the heritage and environmental mantel to be theirs and have beaten up the local authorities. Sometimes I consider their public campaigns have bordered on bullying.

Maybe to sell more papers, the local Canberra Times usually allows a lot of column space to these few people. As a result the casual readers would see that these views must be correct, or at least must be serious, given the amount of air space they are allocated during such harassing campaigns.

A major part of the problems is that the National Capital Authority and ACT Government have not collectively come forward with a clear and accessible set of master planning documents for the whole of the lake as well as the parliamentary triangle. This neglect has allowed such groups and individuals to raise a multitude of objections based on all sorts of claims.

I seriously  think it is well overdue that the agencies involved should get together and draw up a flexible set of master plans. This planning  needs to allow for various mixed developments over time  to increase the attractiveness of the foreshores for even more community activities.

Do not get me wrong. I am not advocating opening up all these areas to the wholesale onslaught of the developers. But developers with intelligence will be required. They exist but there are not many of them!

Development around certain areas of the lake can and should happen. The landscape will change and can be changed. But the developments need to address the landscape quality and character of the sites concerned. This means that planning should not be just about maintaining the foreshores as they are now and yes – they are great! But it should  be about enhancement through changes and development in order that the sites meet the growing and serious climate changes that will soon be upon us.

I see the campaigns of these usual suspects as not helping. Their negativity seems to indicate that they want nothing to happen to these lake foreshores. I disagree. and I suspect most residents would see changes as a good thing, depending on what it is to be and how it is about being community and visitor friendly and relevant.

With intelligent and creative master planning, these areas could be enhanced. Many of the landscaped bush areas should most likely be left alone. However many lake side areas could do with much better facilities to attract a lot more people to the outdoors and to offer more encouragement to residents to get out and engage in healthy and social activities.

Looking to the future and next generations, we need to have development that delivers resilient, engaging and healthy urban environments that have been designed in balance with natural and cultural systems.

The trouble being that I am not confident that our agencies understand the required integrated, creative and intelligent forward planning required for such a complex set of sites. Yes they are good at occasional polished dense planning documentation. These do nothing to inform the residents of the possibilities for our urban settlements.

It is time for a different approach and this central area awaits such a challenge to be addressed.

Then we could think likewise about some of the other many areas of the capital.

And if designed well, that maintenance facility should go ahead.

PS: A short letter was sent to the Canberra Times on this – it remains unpublished.