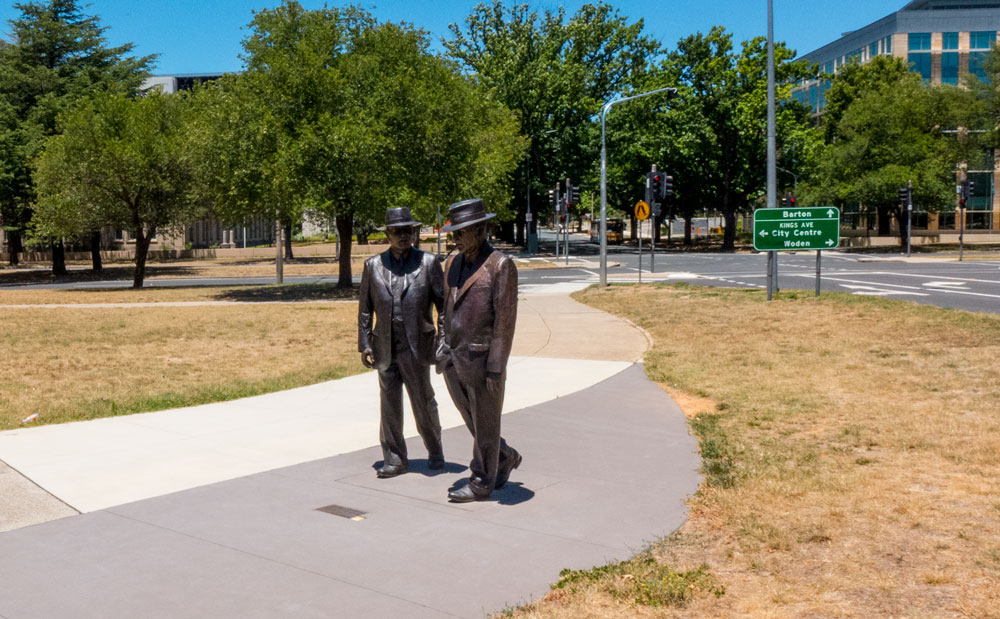 When “Seven Days” columnist Ian Meikle remarked in “CityNews” on July 19 that the ACT Legislative Assembly’s Standing Committee on Economy and Gender and Economic Equality is seeking submissions to its inquiry into memorialisation through public commemoration, it did raise an issue or two.

Does the committee really think people understand this bureaucratic claptrap? The first lesson in communication for this standing committee is to speak in plain language – not gobbledygook.

Its call was based on a statement that there are too many blokes represented with the current crop of statues. Not realising that the ACT government had commemorated many people, let alone blokes, I checked the government’s public-art database. This means that my research left out those plonked down by the federal government.

The National Capital Authority has a problem with equity in its monuments; no surprise given its misguided notion of equity in the treatment of residents.

On the ACT list there are a small group of national/international males including La Perouse (Red Hill shops), Gandhi in Glebe Park, Deakin’s head on a plinth at the Deakin shops, a soldier at Duntroon, Mal Meninga, Confucius in Dickson (where wise people live), and a couple of national politicians.

Sir Robert Menzies walks along the foreshore off Commonwealth Park, very close to the edge and as if he is about to wander into a shrub. However, the best piece of realistic public art in Canberra must be the one, just off Kings Avenue on Queen Victoria Terrace, dedicated to two politicians, John Curtin and Ben Chifley chatting as they stroll to Parliament from their lodgings in Barton.

Always brings a smile to people who see it and some still mistake them for real people.

The ACT listing does not contain any female representative by name. Not good! But to say that the city has an overrepresentation of males could be true – but not by much when you take out the national figures. However, equity needs to play a greater part in how artworks are selected – or in this case for monuments to those deemed to be important.

This brings up another point of contention. No matter what gender is supposed to be represented, realistic statues selected by well-meaning committees of worthy experts tend to be boring and even a bit of a joke.

Despite that, there is usually a community desire to commemorate significant individuals, groups of people and particular events – such as the 2003 fires that ripped into the southern suburbs.

If you have not got my drift by now – let me spell it out. I love good public art. Unfortunately, most realistic portrait sculpture is farcical (there are exceptions). Creative public art provides fantastic opportunities for governments to engage with sectors of the community and through that process involve artists – sculptors and makers of public artworks.

Public art, be it more abstract, realistic or simply something that attracts attention, should be a major program of any ACT government. There was such a program when Jon Stanhope was Chief Minister, but dumb forces were vocal about this allocation of funds and he cancelled the initiative. The nasties won that day!

An intelligently managed and well-resourced public art and outdoor sculpture program may go some way to offset the rubbish buildings being plonked throughout the city.

This city needs more memorable artworks, stuff that amuses, artworks that provide aesthetic pleasure and quirky stuff is welcomed! Most should be about groups, events or be artworks to be wondered about and enjoyed.

There’s the need to understand landscape design and the appropriateness of where works are placed. Some present artworks have been spoiled by inappropriate placement and little thought to the surrounding landscapes.

There’s not enough space in this column to outline the details on how such a program could operate while addressing equity matters. By all means gather names for commemorative stuff if you must – but that initiative should be a subset of a new creative public art/sculpture program.

Let’s bring back the fun to urban spaces throughout the whole city – not just the centre of the city!