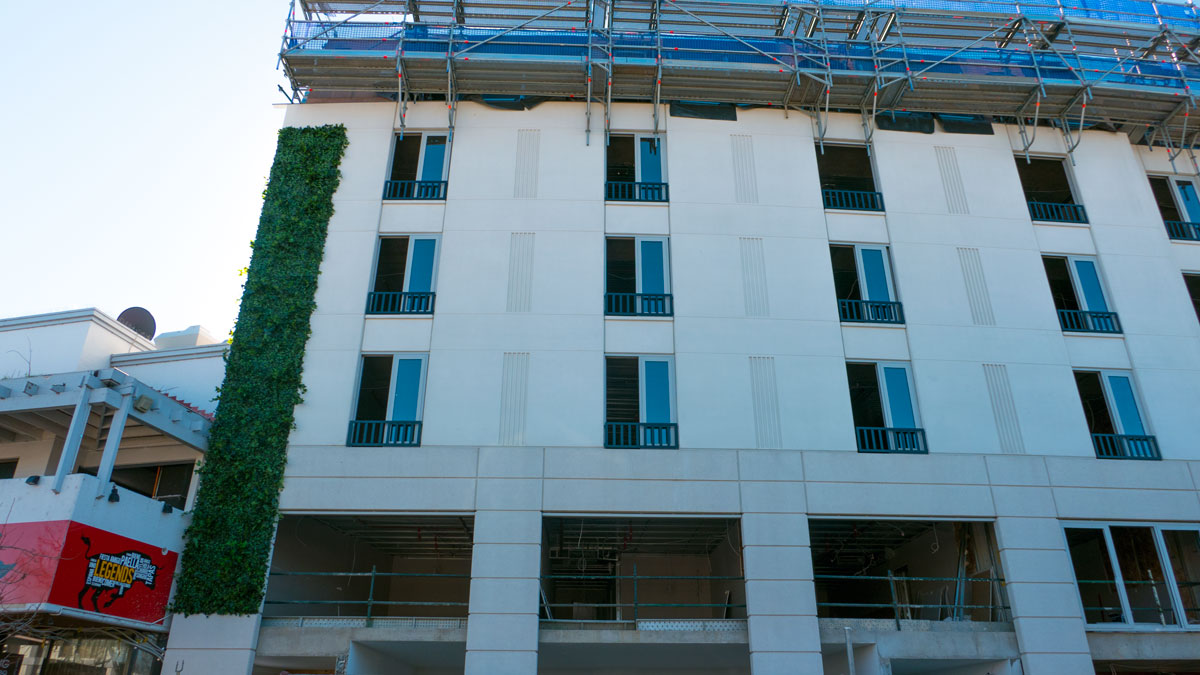 I have written earlier about the goings-on in Manuka over the Lianglis Manuke Cinema development.

In walking around the site, there was a laugh to be had. I didn’t mention this before because what hangs there in plain sight needs special attention.

It is not often that a developer shows us that they have a sense of irony and can provide us with a laugh. I suspect not everyone will agree, but full marks to them for doing what they have done to the side of the new building.

When the Design Review Panel made its suggestions, besides being mostly rubbish, there was the suggestion to address climate with something such as a green wall.

It would have been preferable for the developer to have provided spaces around the perimeter for trees and other greenery. But remember that it is the Planning Directorate that makes the rules and that building to the edge is what they allow, if not encourage, the developers to do. And so, the developers are doing just that.

When the Liangis family had to deal with the comments from the Capital Design Review Panel, the reactions must have been somewhere between anger and disbelief. Having a sense of humour, therefore, was necessary.

On the end of the new building on Franklin Street hangs a plastic green wall thingy. It is a couple of metres wide and is almost as high as the building.

When I first saw it, I stopped, stared to see what the hell was I looking at, then burst out laughing.

I have seen too many efforts at putting green walls on buildings.

Almost all are a complete waste of effort and would do nothing for climate. Those hanging off the New Acton building are in that bracket.

Pretending to be green or applying some greenwash is not something to be taken seriously – although most in urban development bureaucracies still believe the myths that what developers throw up as green walls do something meaningful.

The question is who was the target for the Liangis joke. Was it the planning chief and his directorate’s bungling of the issues to do with this development or the whole, silly concept that a green wall will save the planet, or was it the residents who stuck it to the developer about removing THAT tree?

It could be all of the above and given what had gone on. It could be the Liangis family simply having a laugh at everyone’s expense.

Or maybe they think that green plastic will be the saviour of the world given the coming climate catastrophe.

While residents are being frustrated by the lack of real planning happening in Canberra, it is good to have a laugh. There should be an urban award for having a sense of humour and there’s a candidate waiting.