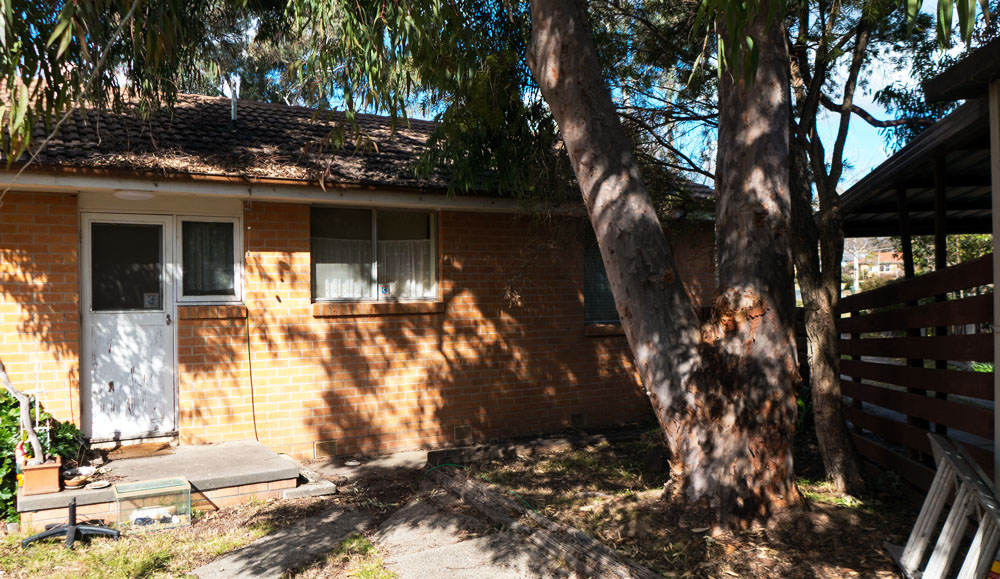 Bureaucracies can be so out of touch with reality. Not for the first time there are serious questions around decisions being made about the fate of trees in the suburbs of Canberra.

The catalyst for this piece starts with a sad story in Holder where a resident is being driven crazy by decisions about the obvious need to remove an inappropriate tree next to his house.

The costs are mounting as he employs plumbers to fix the drains. He has the joy of watching the slow damage being done around his house.

The monster in question being a huge Angophora costata (Sydney Red Gum). It could grow to be 25 metres and looms over the house. It will most likely drop a large limb on to the roof some windy day.

It is a wonderful specimen, just that it is listed as being suitable for the largest of open spaces – which this is not.

The resident has tried twice to have the removal approved but was knocked back by the tree conservator with very condescending responses. 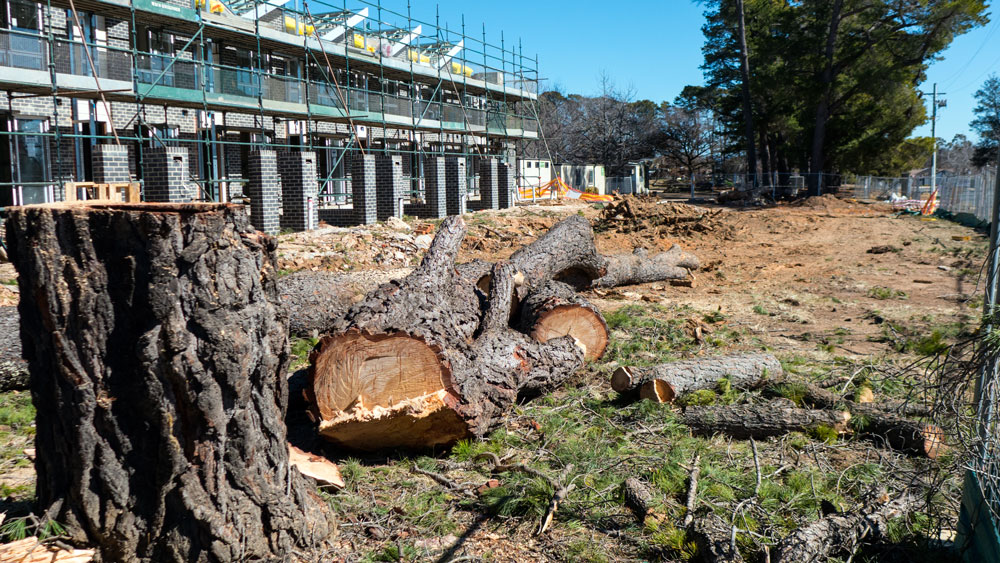 Meanwhile in Downer (above), a line of previously significant heritage trees on Bradfield Street have been chainsawed.

These were the same trees that not too many years ago when the development was discussed, were always to remain – being heritage listed. Down they came. Where was the tree conservator?

Over in Lyneham the Christian School cut down a line of trees on public land to allow easier access for its tradies. Where was the tree conservator? In Kingston there is a line of gums that are destined to go to make way for the Greek Churches age-care development. Where was the tree conservator?
As mentioned in an earlier piece on significant tree stupidity, the tree on the border of two blocks in Manuka continues to threaten nearby houses. It is decaying. The tree conservator has ruled that it must stay.
The property owner loves trees (in their right place) and would be happy to plant more than enough shrubbery to compensate for the tree removal.
And while in Manuka, what more can be said about the comings and goings around the former large plane tree on the cinema site.
Tree conservator says no; chief planner says yes; tree conservator says no; and finally, mysteriously while the conservator is away, another tree conservator says yes. Tree gone!
The circumstances around the Holder tree and the suburban Manuka tree are that these very large specimens are in the wrong place, are dangerous and are doing damage.
These matters need urgent and sensible action by someone in the bureaucracy – or even a politician.
This is our bush capital and, in most cases, we want to see the trees stay.
A lot more trees need to be planted. Many of the gums previously planted in suburban yards and in streets should never have been planted where they are.
There are heaps of alternatives. For the sake of credibility, the city’s residents need to believe in how decisions are being made and that decisions around trees are based on the reality of the circumstances not on what seems to be a fundamentalist view that all trees must stay.
The city needs to base the decisions on trees and greenery in the context of an urban forest strategy. While some trees may/may not need to go, these decisions should not be done in isolation to a wider strategy.
The basis for this sits on the shelves of this government.
This ACT Labor/Greens government needs to act on the recommendations from the Commissioner for Sustainability and the Environment’s 2011 report on the government’s tree management practices and the renewal of Canberra’s urban forest.
It is time for some sense and real planning to return to looking after our trees.