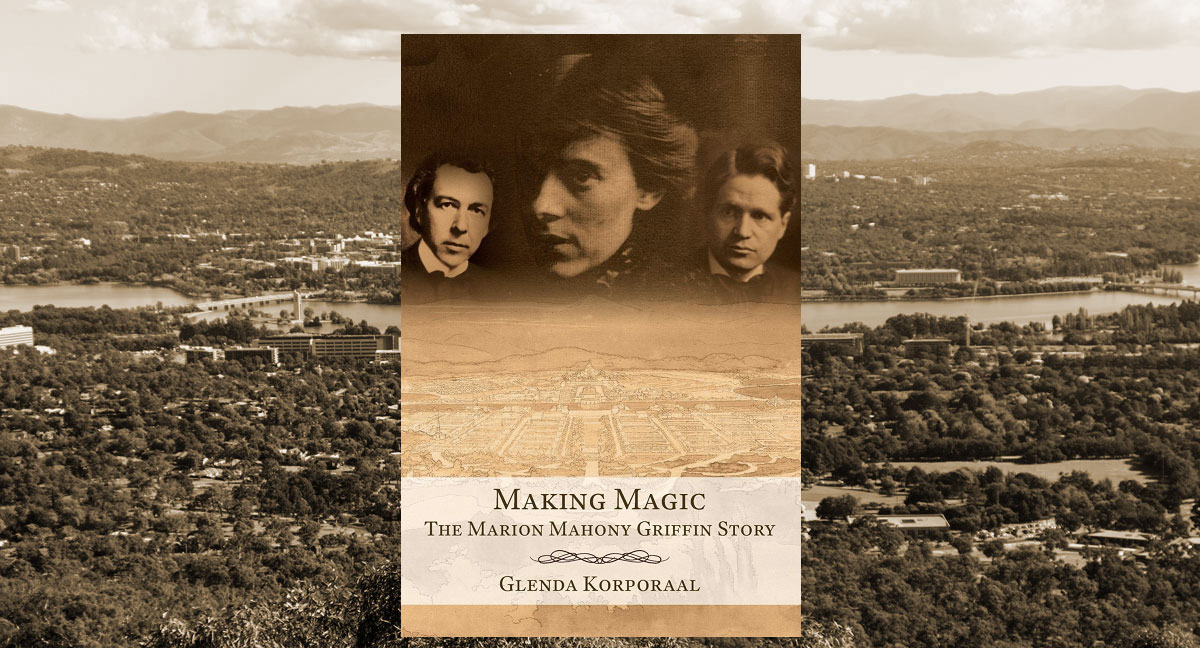 Particular major urban developments in Canberra have been promoted to be in line with the plans of Marion Mahony Griffin and Walter Burley Griffin or somehow in the spirit of the Griffins.

The National Capital Authority and its partner in urban disasters, the ACT City Renewal Authority, have used disingenuous versions of the Griffin concepts to justify major works.

These official disinformation campaigns provide a soft edge to questionable stuff by agencies who would know that most people in Canberra would have not read up on the lives of the Griffins.

My own reading about the Griffins has been patchy. I have enjoyed many well researched articles on them both, but have not read any of the many books on the Griffins from cover to cover. Dipped into and read certain chapters, yes – but till now had not consumed one completely.

Given the levels of misinformation being put about by the ACT government and the NCA, I put aside a couple of days recently to read the 2015 book, “Making Magic: The Marion Mahony Griffin Story” by Glenda Korporaal.

This book is a fabulous read! It is so well written. It was a joy to sit back over a couple of days and immerse myself in the stories the author has extensively researched and the insights she has brought together. I recommend that you read this book – soon.

If you have any interest in Canberra, then reading this book will fill in a lot of gaps and allow you to deal with the rubbish statements used by those in authority to justify the unjustifiable.

Many Canberra developments have been done in their name. Most are an insult to their legacy and their fascinating lives.

One major blot on the landscape has to be the 2006 NCA publication – “The Griffin Legacy”. This was well researched, but that research was then misused to provide a blueprint for bad development.

The work by the City Renewal Authority on West Basin sidelines Marion’s dedication to parklands by the lake and her passion for native plants, trees and biodiversity.

The list of things the NCA is getting wrong is too long for this brief opinion piece. They are today’s version of the bureaucrats who worked hard to mess with the Griffin’s creativity and design concepts.

When Marion and Walter put their heads together for the original plans and designs, they brought to the table architectural, landscape and artistic energies – to produce a winning set of designs. It was Marion’s artwork that won the day!

Thanks to them, and a couple of the subsequent urban designers (excluding today’s pretenders), Canberra has some fantastic urban and aesthetic aspects. It remains a great place to live. This despite the best efforts of the chief minister, his pet development authority, the ad hoc ACT planning directorate – and the NCA.

What would Marion and Walter do today if they were to make a return visit? What would this creative pair propose as the visionary design for this city into the later 21st century? They would have to work with what is already in place.

They would be free to enhance the best of the city’s features and put in place new visionary plans and designs to deliver a well-designed city ready to deal with climate and environmental issues as well as delivering a very liveable city.

Today’s urban designers should get inside the heads of the Griffins and work with their philosophical approach of putting landscape first to provide a new 21st century vision for the city.

Such an urban design vision should be the subject of an international design competition.

This city desperately needs visionary leadership. What “Making Magic: The Marion Mahony Griffin Story” delivers is that Marion and Walter were visionaries who were thwarted by campaigns of misinformation and bureaucratic distractors.

Sadly, what remains of their vision is still subject to being massively misrepresented and undermined by today’s bureaucrats who today think they know best.

They definitely do not. Read Glenda Korporaal’s book.