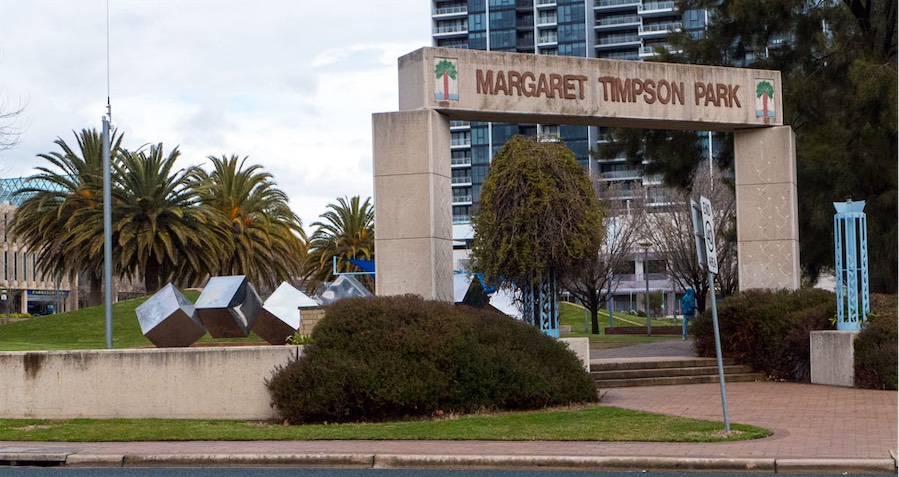 The last couple of years has been bad news for parks in Canberra.

The Molonglo residents pleaded for the Coombs Peninsular to be rezoned as a park – Ministers Chris Steel and Mick Gentleman both said no.

More stupidity with Colo Park, besides Cooleman Court, that is to be bulldozed partly for a car park. This one is all on Chris Steel – local Labor. Residents now await the Greens’ new local member Emma Davidson to step up and represent views of the community.

Then there are many cases of parks being reused after Yvette Berry’s barbarians snuck through a change that allows community zoned land (parks) to be taken over for community housing.

That would be section 72 Dickson, Bill Pye Park, Ainslie (thanks to the YMCA), Chapman and others. Which brings me to the latest brought to my attention – Margaret Timpson Park in Belconnen (opposite the mall).

In 2015, a master plan identified the need to improve the park. In 2017 workshops delivered a set of consistent messages about improving Belconnen including that the government should knock down the vacated medical centre on the south of the park and use that land to extend Margaret Timpson Park. Logical. Sensible. The community was very clear. You would have thought!

The response? In August Tara Cheyne MLA (Belco, Labor) proudly posted on her Facebook page that the building was to be demolished and works to begin on a new building to be completed by February. That didn’t happen. She said nothing to acknowledge the views already expressed by the planning sessions with residents. Not a good look for the local member.

Early in 2020 a government notice appeared in the neighbourhood letterboxes announcing that the health centre would be knocked down (good, so far) and would be replaced with a social-housing apartment tower (surprise!).

Now guess which barbarian minister would be behind this overruling of a clear community wish to extend the park? This housing proposal goes against the clear recommendations identified through the government’s consultation processes in 2015 and in 2017.

The nearby residents are concerned that the government has a negative view of Margaret Timpson Park. The locals will tell you that it is used by all manner of people on different days and at different times. All age groups. Some approached the government to get more seating to allow for grandparents to sit while looking after their grandchildren as well as to encourage more people just to enjoy the cherished open green spaces.

Another big fat “NO” from Chris Steel. Does that bloke ever do anything sensible? And how difficult is it to understand why residents want more parks, not less?

When researching this piece, looking at Google Earth it is clear that this park is precious – as there is very little green space in Belco central. More people are moving into the area. More retirees are choosing to take up residence in the adjacent apartment towers.

The park is important given how little else there was previously. Now it has become a vital piece of greenery to the growing neighbourhood. Extending Margaret Timpson Park is simple logic.

For the politicians in the ACT Assembly – I provide this note from a website on monuments: “The park commemorates Margaret Timpson for her advocacy for women, and her impressive achievements in improving the status of women, both in the ACT and nationally. Her particular areas of interest included women’s health, women’s participation in sport and education for girls, as well as providing more opportunities generally for women to achieve their full potential.”

The park was dedicated by Rosemary Follett, as Chief Minister, on March 10, 1994.

This latest horrendous proposal not to extend the park does not build on the former naming of the park to honour a member of the earlier women’s movement.

As Tara Cheyne is showing no interest, maybe this is something the new Belco ACT Greens’ member, Jo Clay, could take up with her colleagues in government. Let’s have more parks! Enhance the honouring of Margaret Timpson.