They are not doing well!

With the ACT Labor/Greens coalition in place until October 2024, it’s a good time to start reporting on how it’s performing.

With any new government, decisions made early indicate what set of values will guide it – if any. The report so far? In short – they are not doing well.

The decision by the ANU chiefs does not make sense for many reasons – far too many to set out here (“CityNews” arts editor Helen Musa had covered most of it in her column). This blinkered thinking will destroy the core of what has made this art school so wonderful when compared to others.

The ANU’s spin is condescending to those, past and present, who have worked hard to make the art school highly regarded nationally and internationally. The ANU executive is showing a complete lack of appreciation of the benefits of investing in culture and any commitment to the city in which the art school is situated.

Which brings me to Labor’s Tara Cheyne, the ACT Arts Minister. She has been dealt a challenge to stand up and be counted. Instead, there has been zero on this in her media releases.

Therefore, do we gather she is not interested in what will impact this will have on the profile of this city of culture, the local arts scene and on the investment in the visual arts in Canberra?

This ACT Arts Minister is yet to learn that being in this role is far more than the day-to-day stuff (having your picture taken at openings). She needs to be taking initiatives and get creative (good thing for arts ministers to do) by working with the ANU to grow the arts school – not stand and watch while it has some of its core functions removed.

First score of the season for the Arts Minister is a big fat zero for lack of initiative. Hopefully she could do better! Maybe do something about Canberra’s art school?

The ACT Minister for Sustainable Building and Construction

There’s quite a list of the topics that burn with residents when it comes to planning, development and what gets built. A constant on the top list would have to be the sad state of building regulation. Are there any, you ask?

(picture above of dodgy plumbing in Kingston apartments)

In the last few years there have been numerous stories of the perils that have confronted residents of apartments across Canberra.

While the former Minister for Building Regulations, Gordon Ramsay, made some headway in dealing with this significant fault in how the ACT government looks after its residents, there was a lot more to be done.

Into this role has stepped the Greens’ Rebecca Vassarotti as Minister for Sustainable Building and Construction. One of her first media releases was titled “The ACT Government has today released its response to the Legislative Assembly’s Inquiry into Building Quality in the ACT”.

I suspect many who were looking for big changes were not impressed. Her media release was a classic for this government.

Somehow it sounded as if it was written by one of those infamous communications officers that residents now recognise are employed to shut down issues that matter.

There are so many grey areas within her media release that if not much happens, then no-one should be surprised.

This media release has many weasel words and so we should expect that many of the bad building practices of the past will most likely be still the subject of complaints when the next elections roll around.

This is a wishy-washy start for this Minister. The first score of the season for the Minister for Sustainable Building and Construction is a sad 4 out of 10. She could definitely do better!

The ACT Minister for Planning and Land Management 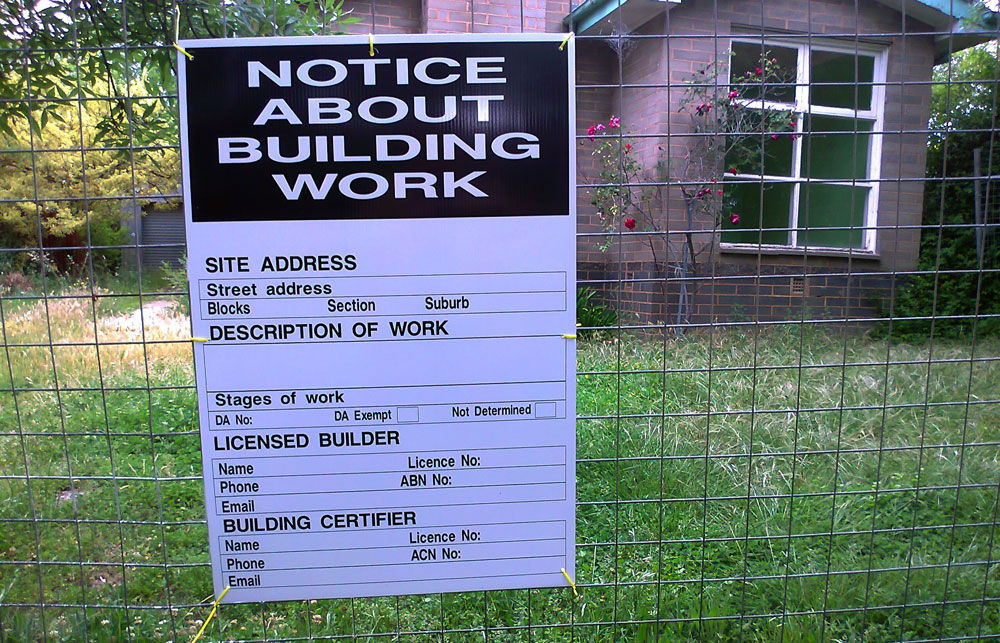 Nothing to see here… a development notice with no information

Given how this minister, Labor’s Mick Gentleman, has performed in this role in previous years the politest thing to say about how he is performing since the elections in October, is that it is business as usual. Nothing is to change.

This is sad news for Canberrans who love the bush capital and want to see good architecture, creative urban design, more greenery, better biodiversity, respect for heritage, and a government that works with the residents – not one that delivers what has been judged as being “vibrant” and “with a distinctive urban identity”. Meaningless twaddle!

The media release that has brought this home to residents is the one published on November 30 titled: “A simpler planning system that provides better outcomes for Canberra is on track with the release of papers following extensive community consultations”.

This is the sort of media release put out when the government and its bureaucracy have nothing new to say and they hope that no-one notices.

Since the 2016 elections, there have been regular announcements about doing something (anything!) about the ACT’s horrendous planning and development system.

Not much has happened except that the Planning Directorate has carried on unchecked in the downgrading of aesthetics, design, heritage, biodiversity, greenery, and so much of what was once boasted about as being a well-planned designed city.

One community leader summed up the reactions quite nicely when she said: “The press release contained the line, ‘The ACT’s strict rules-based planning regime would be replaced with a simpler system…’ They’ve clearly lost the plot and are already in denial.

The ACT has next to no strict rules, and all the criteria they have for performance are routinely abused by proponent and assessors. If you don’t define the problem in the first place, it’s just garbage in garbage out.”

So it’s Christmas and what shall we do? Do not have fun with the family and definitely do not think about putting your feet up. While Mick Gentleman goes back to his man cave for the break, he has uploaded 212 pages for everyone else to share with family over Christmas dinner.

The strategy is simple. When the planning system is complex and inaccessible, make sure the work to untangle it is dense, full of repetition, has loads of vague and meaningless statements, and at best of is guaranteed to be read by very few.

Just the sort for consultations that have resulted in the mess we are in today.

Who do you think is taking the lead on bringing together the so-called changes? Of course, Mick Gentleman and his Planning Directorate.

The same people who, over the years, have altered the ACT’s planning system so that it is full of regulatory holes that developers and their consultant planners fill with development applications laden with faults and alternative facts (fibs).

Given how bad this minister has performed in the past – his score will have to be the subject of a future “HaveYourSay’ waste-of-time survey later in the year – or maybe next year or even the year after.

This minister has so far shown nothing to disprove his reputation that he is incapable of doing any better. His score for December 2020 will have to be “no comment possible”.