Making the time out to visit regionally 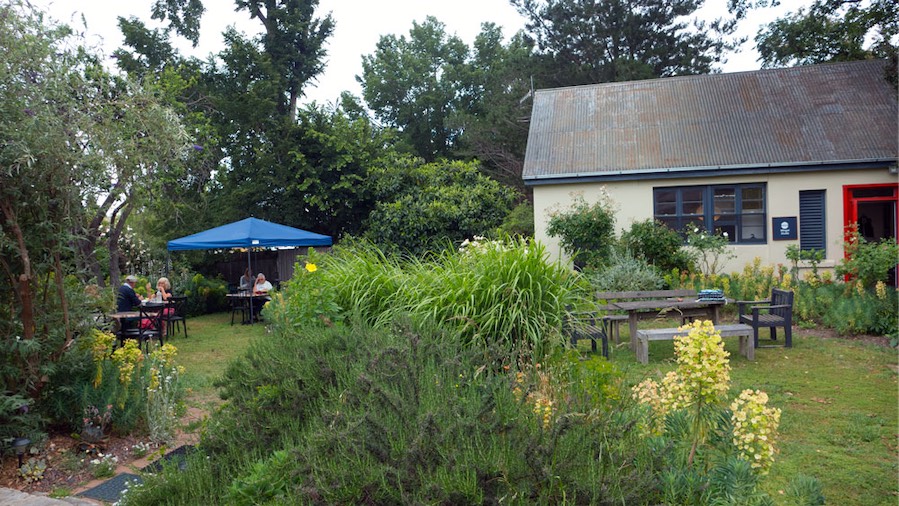 Earlier this month we ventured out for the day to meet a friend at Braidwood. She was from the south coast and so Braidwood meant we both travelled just over an hour.

We have done this a couple of times. It makes for a pleasant short drive, lunch at a café (different each time), a bit of a walk around the town and back home around mid-afternoon.

Braidwood may have suffered during the various disasters during 2020, but on the Thursday we visited, the main street was packed – almost no parking available. We parked in a side street, so no hassle.

This time we wandered up a lane way following the signs to a café named Vanilla. While the entrance was not exactly enticing, the café’s location is a gem. It is situated on the back of an old building (many of those along the main street) alongside a fabulous lush garden.

This meant we sat under an outside awning (I have to stay out of the sun these days) while looking on to the garden – as well as a couple of groups sitting at outside garden tables.

I have heard since that it can get busy and they prefer people to book on the weekends. We had not booked. Took our chances at lunch on that Thursday – and all was good.

We enjoyed some good food and a coffee, then strolled around – sticking our heads into the occasional shop.

There are a couple of planning matters worth mentioning about Braidwood. One being the parklands at the top of the town. One part of this park would be known to many as it has a well looked after toilet block that travellers to the coast would be familiar with.

There’s also a small pool nearby. There are many large trees – so a lot of shade on warm days. However, what caught my attention were the playground facilities.

The playground has everything a parent would want. There are many activities for children. It is simply done and includes what so many missed out on. That being a path that goes around the outside to allow children to run/ride in circles around most of the playground.

The other big plus is the generous number of seats and tables for families to sit at while the little ones go for it on the equipment.

Nearby is another parkland. This one is the quiet type with many older shade trees. There were people sitting in groups having picnics and others quietly sitting under trees reading or enjoying the ambience.

The population of Braidwood would be around 2000. The politicians from the various electorates in Canberra need to be more active about pushing for more play areas and peaceful green spaces in all areas of Canberra.

The inner-north, for instance, has around 50,000 residents – and Woden has about 40,000 and growing like crazy – so how many fully equipped playgrounds should that be?

BRAIDWOOD has had a long-running controversy with the trees that line the highway on both sides. Sadly, because of high speed, there have been bad accidents and deaths as cars and trees meet each other. About a decade ago, the debate became heated when the council seemed to favour removing the trees.

Sometime in recent years, the speed for this section was reduced (sensible). And during this recent visit I noted new guard rails had appeared (ugly, but effective).

I have since read that a wise solution had been found to deal with the closeness of the heritage trees to the road.

Cuttings have been taken and new trees are almost ready to be planted. This will solve the siting of the trees, but also deal with the sad fact that many trees had been removed because of ageing and some of the remainder were not much better. The new trees will duplicate the original avenue but be located further back from the highway.

Trees are important to people. Heritage is part of our culture. Well done to those in the Braidwood community who fought long and hard to have the avenues of trees remain as part of the town’s heritage.

At the moment, the countryside between Canberra and Braidwood is fairly green – which makes a big change from recent years when shades of brown were the norm.

Totally recommend to anyone in Canberra looking for a day out to think about Braidwood. It is far more than the town you drive though on the way to the coast.

Of course – this recommendation is about a quiet day out during the week. What it is like during holidays and busy weekends is another story completely. Also check opening times as some cafes and shops close on some days of the week.