Will the Canberra Liberals fall for the Greenslabor tram distraction? 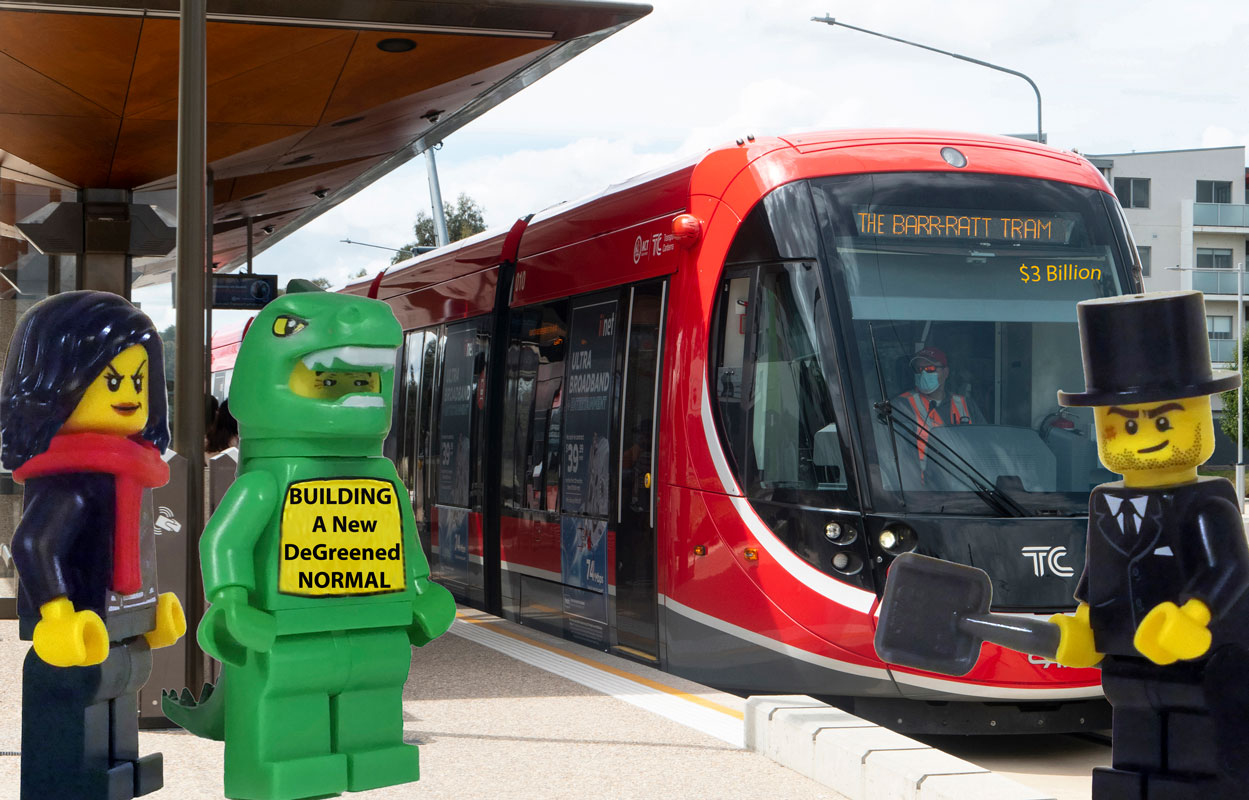 The Canberra Liberals have made headlines about going into the 2024 ACT elections not supporting the tram to Woden.

These statements have been the catalyst for media interviews over the New Year break featuring the usual Greenslabor suspects, Andrew Barr, Chris Steel and Shane Rattenbury.

The latest entry on Joy Clay’s (ACT Greens) Facebook references her joining with Shane Rattenbury to publish a gobbledegook mash-up of reasons why the ACT Greens support the huge and unwarranted expenditure to build the tram to Woden (Stage 2b).

Essentially, they are saying for everyone in Canberra to have education, health, place to work, sustainable houses etcetera, we need to have a tram to Woden.

They go on about investing in schools, hospitals, local amenities, and a high-quality, frequent, reliable, and sustainable public transport. Yet with the coming of the Gungahlin tram, everyone has realised that ACT Greenslabor sneakily paid for that infrastructure with cuts to education, health and social program, and by minimal allocations to address housing affordability and homelessness.

Most outrageous was the transfer to the tram of all the funds from sales of inner north and inner south social housing estates. Who needs social housing?

This Greenslabor cohort regularly claim credit for stuff they do not do. They busy themselves with announcements about how they are delivering on health, education, housing, transport and any other portfolio areas. They are expert at sidelining reality as they underperform in all of these.

The Rattenbury-Clay article is essentially a rehash of policy statements. For good measure, they accused the Canberra Liberals of not having policies to address crucial matters such as liveability, transport, housing, emissions and more. Not true – but what’s a little more misinformation!

Greenslabor knows that is if they something often enough, no matter how rubbish it is, then most local media give them the benefit of the doubt and report what they say as the truth. Surely, they would not lie!

The ACT Greenslabor laugh off damning audit reports. They no longer worry too much (for now) that many residents regard them as being arrogant and openly dependant on their developer/ property supporters. Greenslabor no longer see it as important to care about the views of residents.

However, there is a particular disingenuous purpose behind that Rattenbury-Clay piece referred to above. The Barr-Ratt leadership know they are almost guaranteed their seats at the next election given the profile of the Canberra Liberals. Granted things are improving under Elizabeth Lee’s leadership but while the weird factions have a presence, the Canberra Liberals have trouble appealing to the electorate.

Greenslabor actually do not need to enter into discussions yet about the tram south as it will be well after the next ACT elections before any decisions are confirmed. Knowing this, they have welcomed the Canberra Liberals honesty about their non-support of the Woden tram. That transparency and honesty will now be used against the Liberals in the run up to the 2024 elections.

To win the next elections, Greenslabor need to keep the attention off their countless faults, their non-delivery of policy announcements, the mess being made of planning and that they continue to underspend on essentials such as climate, urban planning, education, health, housing and social issues. Greenslabor need to keep the tram as a lively contentious issue within the media.

The concept, even though it is false, is to convince enough voters that the Canberra Liberals in government, by not supporting the tram south, would endanger the future of the city’s landscapes, would threaten efficient public transport, undermine sustainability, threaten the education of children, and would hinder affordable housing – and much more.

Having declared their position on something way off in the future, the Canberra Liberals need to be constantly publishing stuff about what they will do differently and better after the next election.

They need to be clear about enabling real urban planning (a new planning directorate and leadership), that they will look after waterways, enhance biodiversity, stop the building of heat island suburbs, and invest seriously in 21st century innovative public transport (buses).

Get the message! Do not debate the tram. Instead shift the debate to public transport that delivers to more of Canberra for much less than the Barr-Ratt tram.

There are residents who had recently thought Jo Clay was making some independent and relevant statements about a range of issues. Her joining with Shane Rattenbury to publish that disingenuous nonsense might be making people think again.

There’s 20 months left for her to repair her credentials and her relevance – or to be replaced by a real independent thinking candidate.