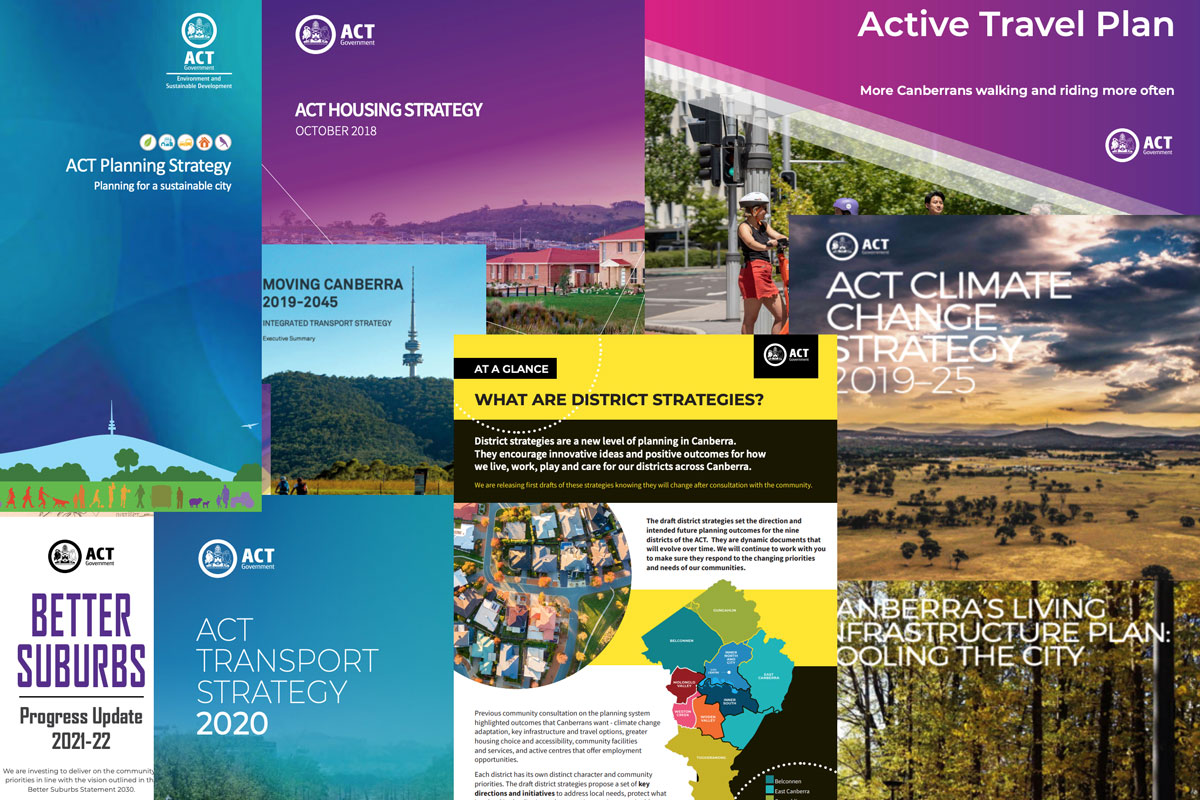 In the weeks before Christmas, when people were trying to think positive about life, the universe and everything else, the ACT Government and developers rolled out multiple gifts of development applications and planning reform documents for people to read. These gifts were not fun stuff.

These documents rely on and are linked to policies already announced. The reality is that most of the ACT Government’s policies are a pretence at being serious. The government’s urban policies are supposed to improve the lives of residents and make the planet safer. They do not. There’s a clear mismatch between what they announce and what the polices deliver – being not much.

Time after time policy launches are just announcements about something the Greenslabor government is going to do sometime soon – maybe. Policy documents come packed with fashionable worthy statements. There are charts of ‘doing words’ alongside talk of consideration, investigations, planning, conversations and meetings. For ACT government agencies, the number of meetings is what they use to show how busy and serious they are.

The colourful policy documents are highly lauded by the politicians who invent them and then mentioned in reports about what they have achieved. The reality is they usually contain very little that would be expected by a progressive government in the year 2022.

They are written not to offend the chief minister and the property and development lobbyists. The developers do not complain much about such urban policies as they know they are watered down minimalist policies that are rarely enforceable through rules.

Developers use these lightweight policies as justification for town cramming development applications and proposals for planning variations. The more cynical ones attach quotes from the policy documents as if they meant something.

From that the residents are meant to assume how serious the developers take the issues the policies were supposed to address such a Living Infrastructure, Climate Strategy and Active Travel. Greenslabor knows what it is doing here.

They announce but not regulate sham policies and then applaud developers for using them in their development applications.

Many pages could be written taking apart most urban policies announced by ACT Greenslabor. For instance, this government has allocated serious resources into ‘Active Travel’ bureaucrats, programs, grants and other efforts to shift the responsibility onto people for not walking and cycling enough. It is not the government’s fault that after decades of policies, programs, money spent and spin that little has changed in how people move about the city.

The ‘Active Travel’ stuff needs to be binned. Instead far more needs to be allocated to fixing the footpaths, building more dedicated cycle paths throughout the city and to improving the bus networks.

A major effort needs to be done to upgrade significant cycle routes such as that from Woden into Civic. That route needs to be a dedicated and safe cycle-way all the way from Woden to Civic – to be one that would encourage more usage. If walking and cycle routes were fixed and upgraded to be dedicated to either pedestrians or cycling (but not both), people would be far more inclined to be active – to walk and cycle in safety.

As for having motorised scooters on paths with pedestrians, the outcome has been less safety for walkers. Those that do walk on shared pathways have to be very ‘active’ to jump out of the way of the machines bearing down on them.

Other urban policies and their enforcement need urgent re-thinks. For instance, evidence is that the urban forest bill may do the opposite of the stated intention. If implemented as proposed, trees in residential areas may be under more threat of being removed.

Similarly, after years of much policy talk, the outcome from this ‘progressive’ government is little improvements to the minimal shrubbery and tree canopy demanded for new developments and sites being redeveloped in established suburbs.

These aspirations for an ACT government engaged with the community to formulate and implement progressive urban policies and a transparent people-focussed planning system, requires intelligent, creative, honest and considerate people being elected to form the government. Now there’s a challenge!