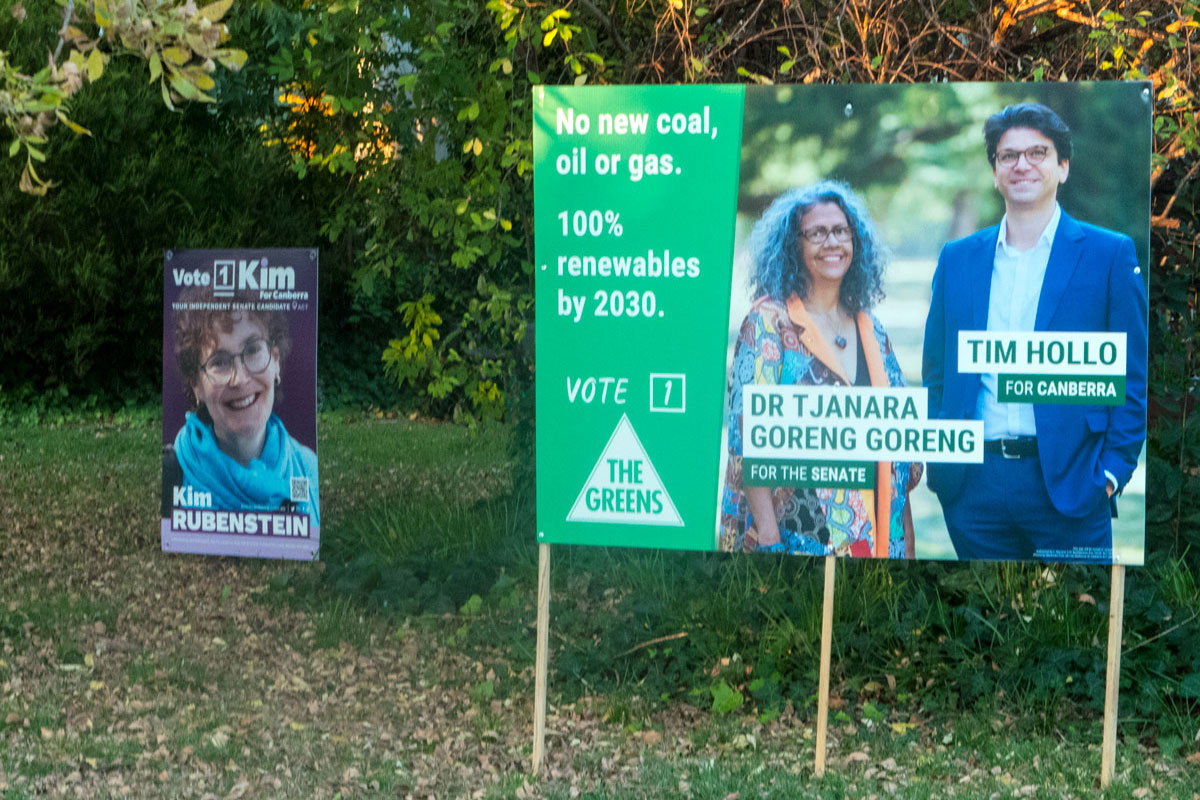 When the Kingston Barton residents brought together a bunch of candidates last Tuesday evening, it was an opportunity to observe who among them had that extra spark to be a great representative for the voters of Canberra.

The format was about responses to four circulated questions. These were about local issues rather than the expected national topics of climate, integrity, equity and the economy.

The two Labor representatives did not stray from their party’s talking points. On anything to do with the tram, the clichés were boringly predictable. At one stage Alicia Payne rambled and seemed to lose focus. Katy Gallagher left early.

Tim Hollo was very much on the front foot and was determined to show his commitment to the territory. On the tram he came out with the ACT Greens talking points – a couple of which were weird.

Apparently, if there is no tram to Woden, the inner north tram will be a tram to nowhere. This will be news to Gungahlin residents who thought the tram came to somewhere called Gungahlin.

Tjanara Goreng Goreng offered comments aligned with the Greens and with Tim Hollo. She left before the meeting finished.

David Pocock’s responses were laid back. I suspect if he had not already had the generous media coverage and the dominance by having a high number of roadside corflutes, that based on his performance on the night he may have been dismissed as not a serious candidate.

Kim Rubenstein was unfortunately late – having had a diary mix up. She was on message but was at a disadvantage with not having seen the circulated questions. I hope to see her in another forum to assess how she handles contentious matters.

It was not an exciting evening. Maybe everyone was having an off night.

With the candidates of the major three parties, party loyalties override the ability to speak openly – to offer personal opinions. They hide behind those prepared talking points!

The two independent senate candidates, Kim Rubenstein and David Pocock should be free of such constraints, but on the night seemed muted. This was a missed opportunity to shine and to make it clear why an independent voice would be different to the majors.

On 26th March I offered some work-in-progress observations on these elections. I still hold that preferences will be the key in the ACT senate results. Katy Gallagher holding her senate seat – maybe with a few votes down from previous elections.

Despite having underperformed on the night, it must be recognised that Pocock has had good media coverage, has loads of corflutes out there plus to his sports fans – he is a brand name.

There remains plenty of positive support for Kim Rubenstein, but till now she has not established a public branding as the Pocock camp has done for their candidate.

There’s a growing certainty that Seselja is going to have trouble holding his senate job. Given the panic in his messages to members and the efforts he is putting in to looking as if he cares for local issues, it seems that Team Zed knows that maybe time is up for him this time.

On the night Tim Hollo was probably the strongest performer if you can ignore his propensity to use bland talking points.  His success in the media should worry Team Alicia Payne.

But, Payne’s Labor corflutes are numerous and very prominent. Her presence as a Labor candidate is alive to a wider section of the voters.

Meanwhile the Greens have their medium sized billboards in the gardens and on the verges in front of supporter’s home. The Greens lack of corflutes elsewhere and the clear Labor branding may save Labor’s Alicia Payne – this time.

These opinions remain a work in progress. It is a just over a week before pre-polling opens on Monday 9th May and then the final day for voting is Saturday 21st May.