The madness of Canberra’s planning and development 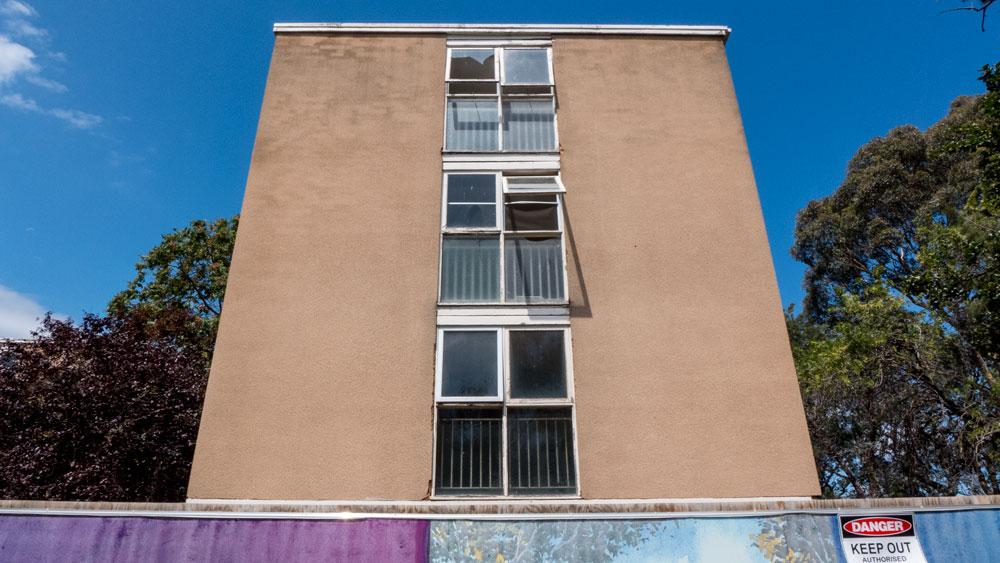 Since the 1960s there has been several rows of public housing located on the main road into Canberra. In the last year, the Dickson Flats have been listed for demolition to allow for brand new multi-unit developments. So far so good. Maybe! (pic by Paul Costigan)

Then came the madness that exists around Canberra’s planning and development processes. 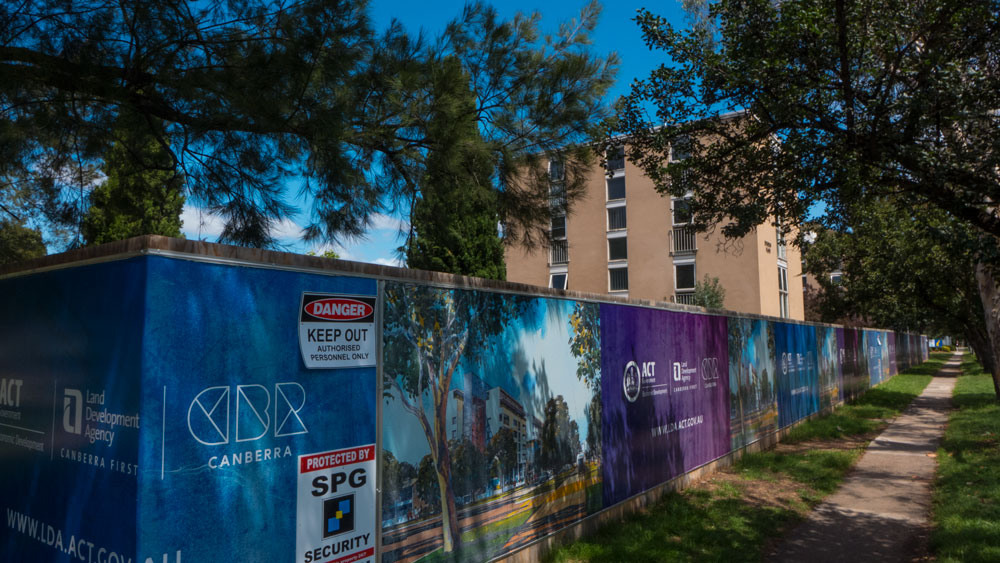 I think the first signs of the madness appeared when various architectural specialists claimed that the buildings were a significant part of Canberra’s heritage. They had been built by a particular architect as places for social housing. I used to walk past these buildings regularly and had noted that tenants had made their lives quite comfortable with small garden plots outside and chairs gathered together for social gatherings.

Unfortunately as part of the welcoming infrastructure that greets tourists to the National Capital, they are ugly.  They are not an attractive set of structures and they must also be very basic when it comes to comfort and sustainability. I suspect that anyone who had argued for their retention would not be able to live in them. 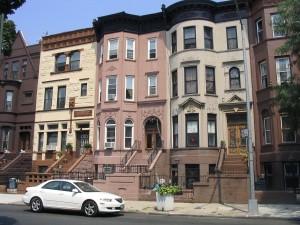 There were voices that proclaimed their value and were putting up cases for the buildings to be kept. Apparently even the local heritage board wants to have them listed as significant heritage architecture. The most amazing response I witnessed was one guy who argued that these buildings were the equivalent to the famous Brown Stone apartments of New York (pic tot he right).

I think I can see a difference in the styles!

So on with the show! The tenants were moved out over time and people seemed to accept that the time had come for these structures to go. It was time for these basic towers to make way for something more attractive to be built in their place.

click here for the story on the exit of the tenants.

My hesitation remains that any new development in Canberra should be welcomed – well at least that’s the theory. The trouble being that up to now development has meant very ordinary, or more often, very ugly new bland box buildings. The Canberra planning and development agencies continue to allow developers to build new buildings that do nothing for the environment, that ignore all the climate change issues and have little or no real aesthetic values.

I was not optimistic at all that whatever was to be built on this site in Dickson, as part of Northbourne Avenue, would enhance the visual arrival of tourists to the National Capital. I was also very concerned that this site along with the whole of the redevelopment of the Northbourne corridor was not being overseen by anyone with any sort of vision. We no longer have any visionary or well-informed politicians involved with urban development in Canberra. 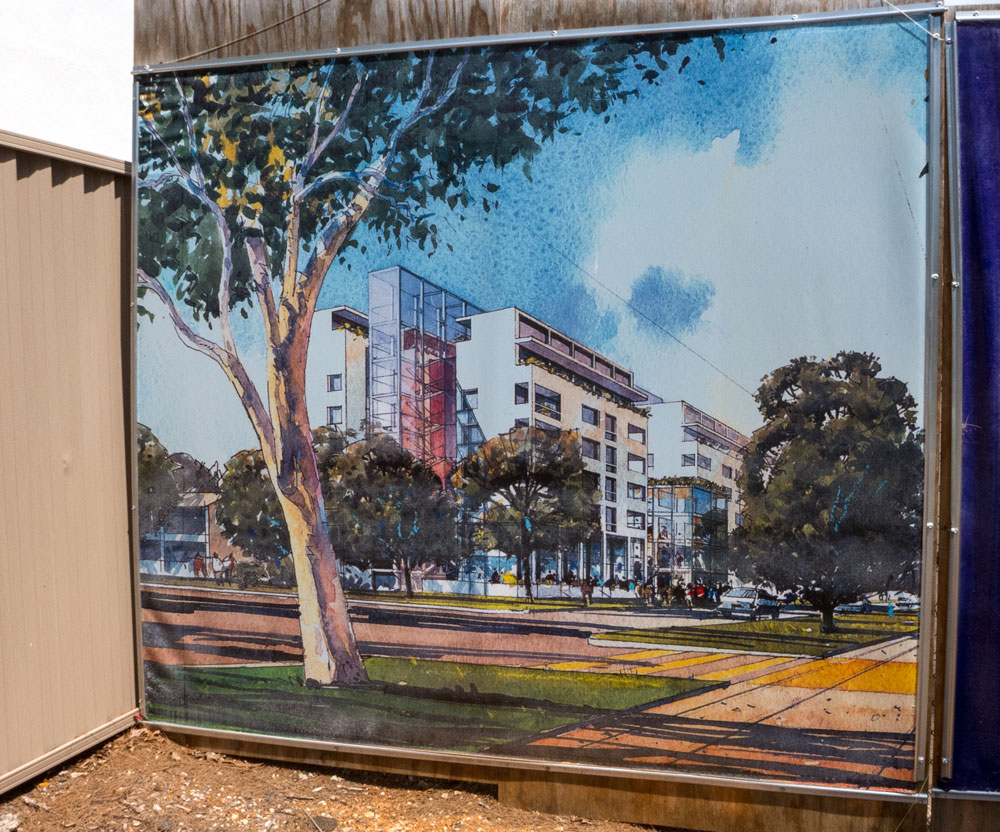 The demolition of the Dickson Flats was still to go to the local planning authority (ACTPLA) for final sign off. I expected this badly run authority to give the go ahead,. After all, the common perception is that ACTPLA is locked into being an arm of the development lobby.

If for some reason ACTPLA was convinced that these buildings were heritage and deemed them to be not to be demolished, this would also not have surprised me either. It would be laughable and just fit into the madness of local planning.

I was not ready for the high level of stupidity that this planning authority is capable of!

Yesterday it was announced that while development had the nod for most of the site,  one of the towers had to be retained as a token gesture to the heritage of the original buildings.

So according to this decision, while the majority of the site will have the usual glass and metal apartment bland box tower blocks built on it, at the northern end they have to retain a solitary block of ‘heritage’ in honour of the former social housing units built here.

I have yet to work out how to politely describe such an utterly stupid bureaucratic planning decision.

In some ways of course I think it is beautifully perverse as the final outcome will sit there to greet locals and tourists and to remind them of the wonders of stupidity that is the norm within Canberra’s planning and development decisions.

I wonder if the tower to be left standing could be renamed as ‘The ACTPLA Folly’?

Potentially the Dickson precinct has a great future but I fear we are not going to see it. There are so many bad decisions being thrown about to destroy the good things about the precinct.

For instance we have the wonders of the new supermarket bland box building – click here. No aesthetics at play here. Climate change? Forget that!

We also have the ongoing battle to have the Dickson Parklands enhanced as a community cultural facility rather than more high-rise residential buildings. The local unions hold some of the key leases and they want these converted so that they can sell them off to developers. click here. As for the local community aspirations? Ignore those!

Meanwhile I remained stunned by the planning decision to keep that lone ugly tower as part of Canberra’s architectural heritage!

It must be time for a cup of coffee and a long sit down on my front verandah.