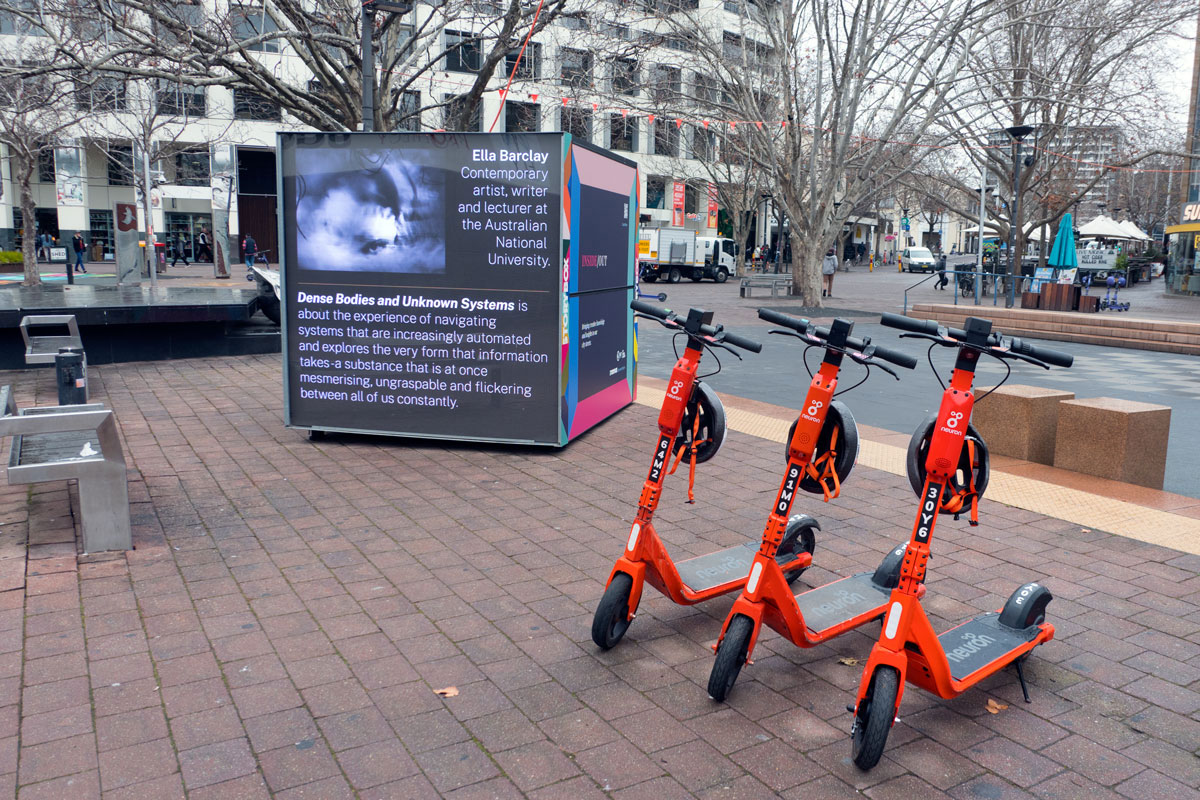 A media notice from the City Renewal Authority about a new artwork in Civic caught my attention. Artworks by this authority have not been that impressive – so what was this one all about? The picture they sent through looked strange as if it was still under construction.

Then there’s the constant changes that have been undertaken over the years to Civic’s urban spaces. How will this new artwork fit in and how will it add to the aesthetics of the place it stands – where ever that was?

And then there was the language being used – such as: “Centred around a giant two-square-metre digital cube in Garema Place, and a series of digital plinths throughout the City West precinct, STORYBOX will invite Canberrans to reflect on different kinds of creative intelligence.” How could I resist?

Putting aside the tempting spin used by City Renewal, I was due to visit Redpath Shoes on Garema Place, so I had two reasons to visit Civic. And as fate would have it, the digital artwork was located right outside the shoe shop.

The digital cube thing may have been of interest if people stopped long enough to work out what it was about. It still looked as though it was something temporary and given its placement, it was not attracting attention from people walking past.

After 15 minutes of watching from a distance – I did not see anyone stop for a good look. For that 15 minutes of unscientific study, no-one’s life expectations were changed or challenged.

It also occurred to me that people walking around Civic open spaces have had years of temporary structures that were supposed to change their lives and make them think deep thoughts about something.

Such light boxes, digital and other forms, have been used in public spaces for a few decades now – some work wonderfully and some just sit there wishing someone would notice them.

Another factor is the constant urban design upgrades undertaken around Garema Place, City Walk and Petrie Place. Some of the urban design stuff works, some of it is not looked after, there are remnants of former works now looking past their use-by date and there always seems to be gear up while workers toil away.

There are areas that are cluttered with random stuff that add little to the feel of these central Canberra public spaces. 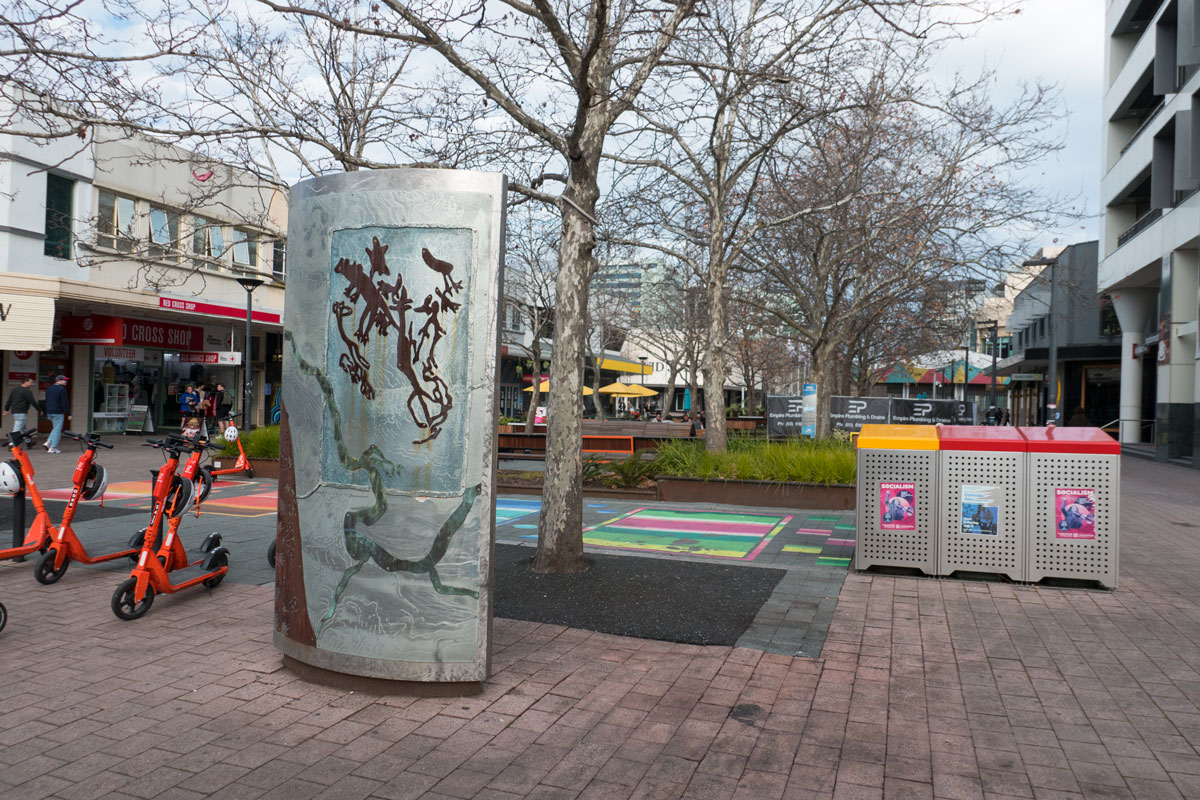 There are particular areas with more seating and on a sunny day these are used well. Garema Place, City Walk and Petrie Place are now a patchwork of various styles. Luckily, they will look better in spring when the many beautiful mature trees come back to life.

The overall feeling is that the current urban design charter is about bringing together bits and pieces that may have worked in previous years in other cities but with little effort to make the whole place work together.

Into this context has landed this new digital light box thing. It is just another attempt at trying to distract and impress. This may have worked in another location – its placement needs a rethink. 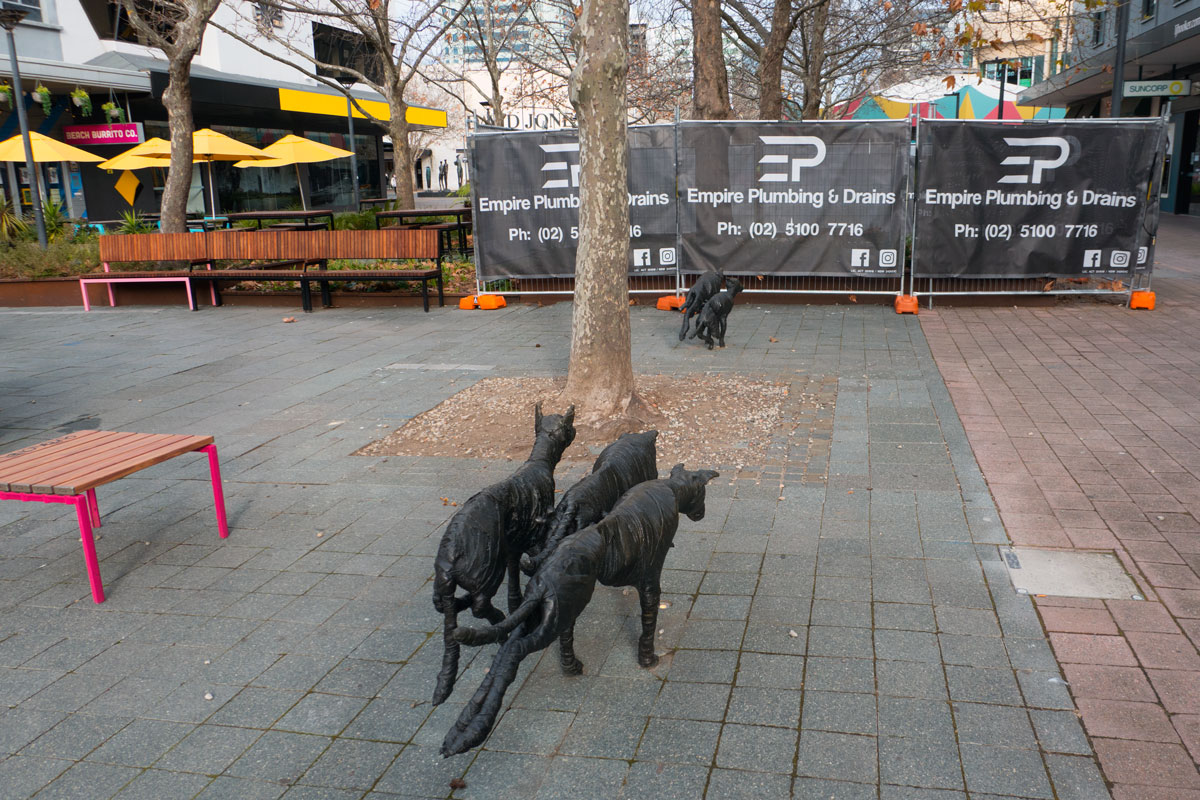 While in Civic I checked out two artworks that I like to revisit. One was “Bush Pack”, by Amanda Stuart. This is the pack of seven wild dogs running along City Walk. As with a previous visit, their progress has been cut short by other stuff going on in front of them. A little respect please for works in place (2011) before City Renewal became a thought bubble by Andrew Barr as his answer for everything.

The other art work is in Petrie Place where it meets City Walk. Jan Brown’s “Icarus” is a fantastic artwork to be in a public space. Luckily there is no urban clutter around it – for the moment. They are keeping watch on us!

The visit to Civic was delivered on several levels. There was the joy of seeing some favoured artworks, I sort of worked out what the new City Renewal Authority digital thing was, my thoughts on the success or otherwise of urban design around Civic remains an open question.

The visit to Redpath Shoes was successful – as it always is. 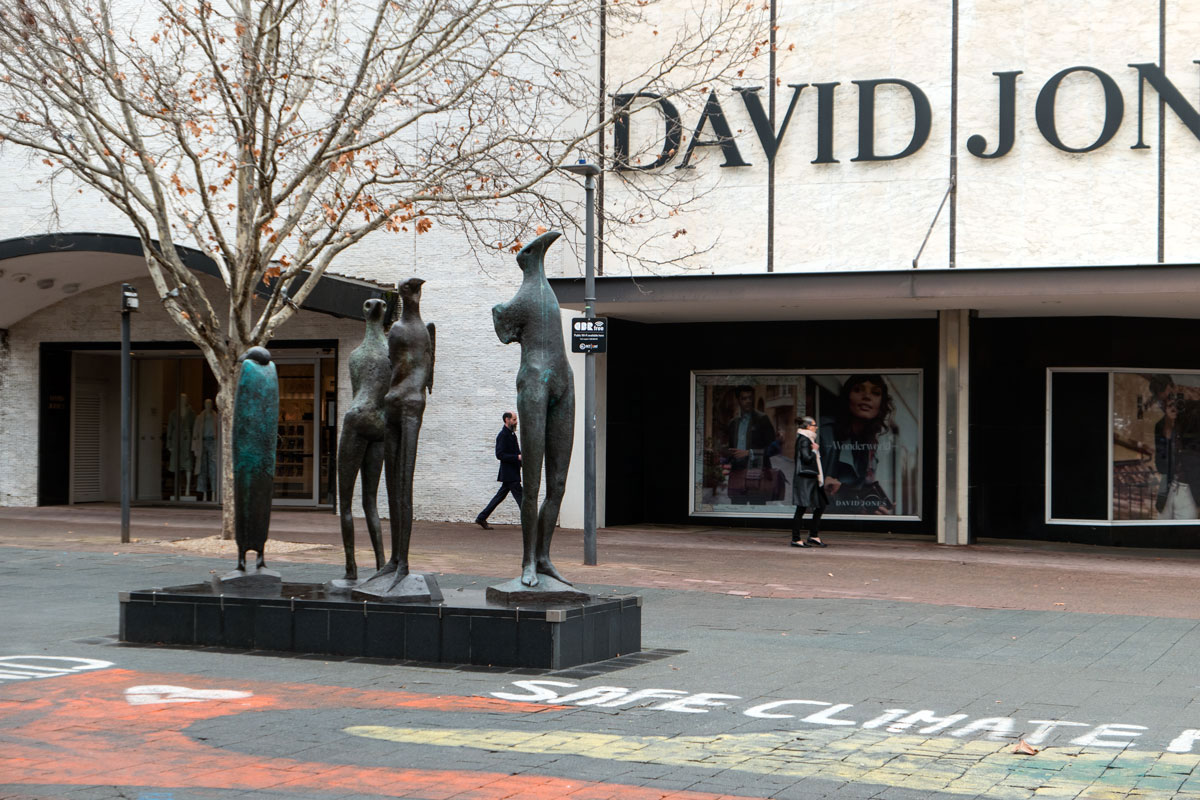