The central area of the city of Brisbane has evolved into a modern city with many historic buildings surviving. These heritage buildings are now surrounded by an over abundance of glass and concrete walls of taller office building. It is not a pretty sight.

in fact looking at the skyline, I am reminded of an old myth about the former commission that used to run Canberra. It was said that they would allow you to build buildings in any colour as long as it was white. Brisbane now specialises in having most of its buildings in some combination of off-white, grey or beige. The city is full of these drab buildings. And they continue to build even more. There’s quite a lot of building work on the skyline. 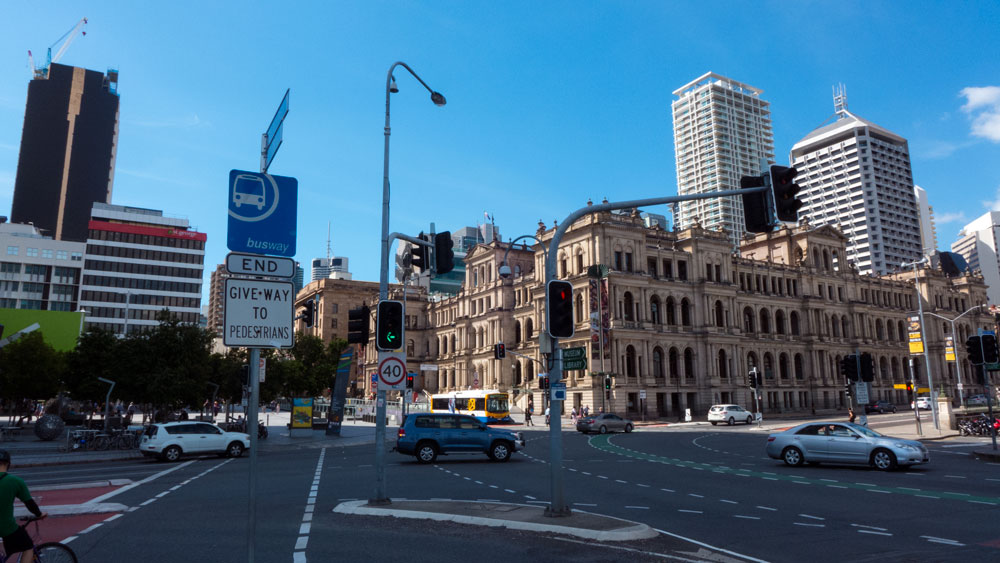 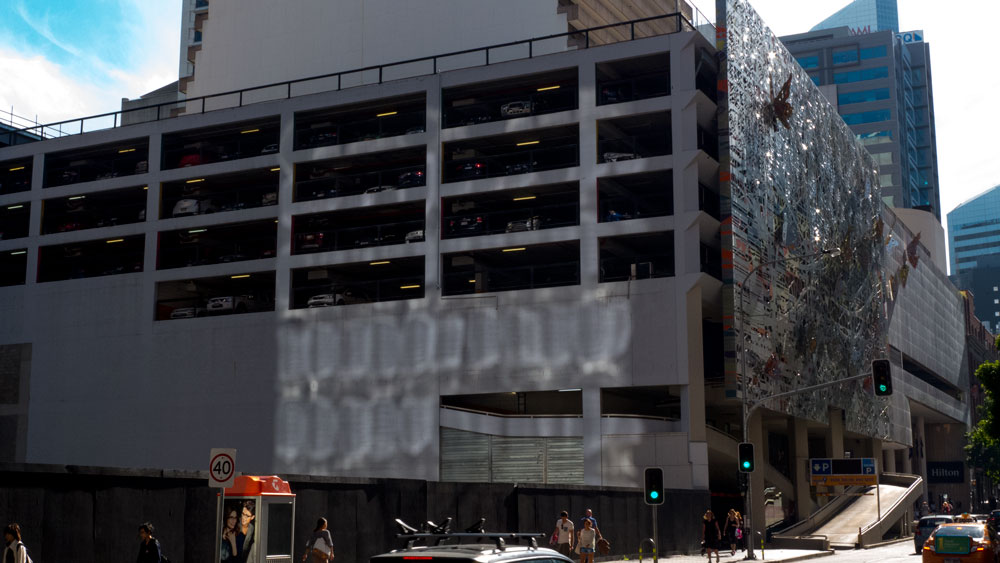 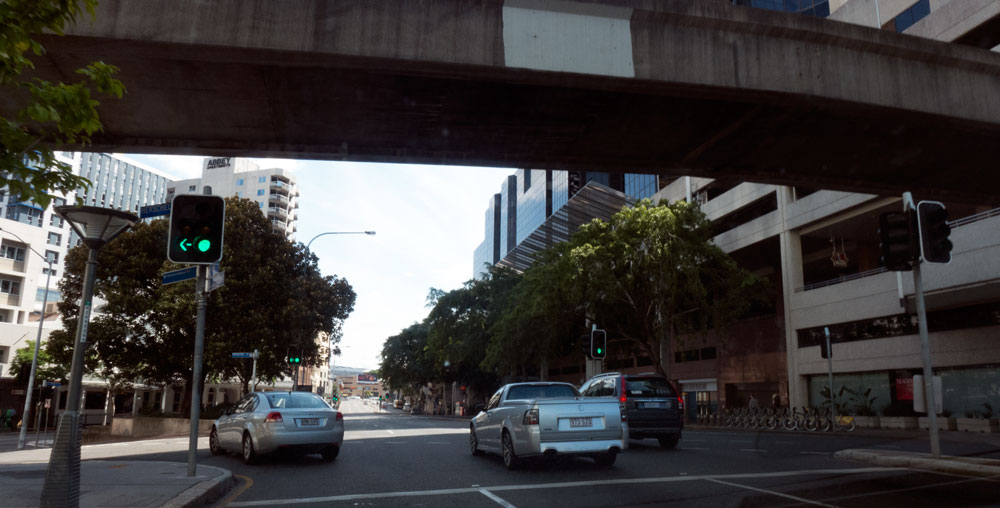 The centre of the shopping district is dominated by the Queens Street Mall. Somewhere in its history this mall was heralded for it design and attractiveness. I am not so sure about it this. Today it is full of structures and very cluttered. It is functional but not aesthetically attractive at all. It is also very noisy.

It has some greenery but the dominate features are all those metal structures that fill the open spaces. Having all these cafes and restaurants fills a need and they are popular but the end result is clutter. The mall itself has a generous amount of casual seating – this is a good thing and it works as the seats are usual well occupied. 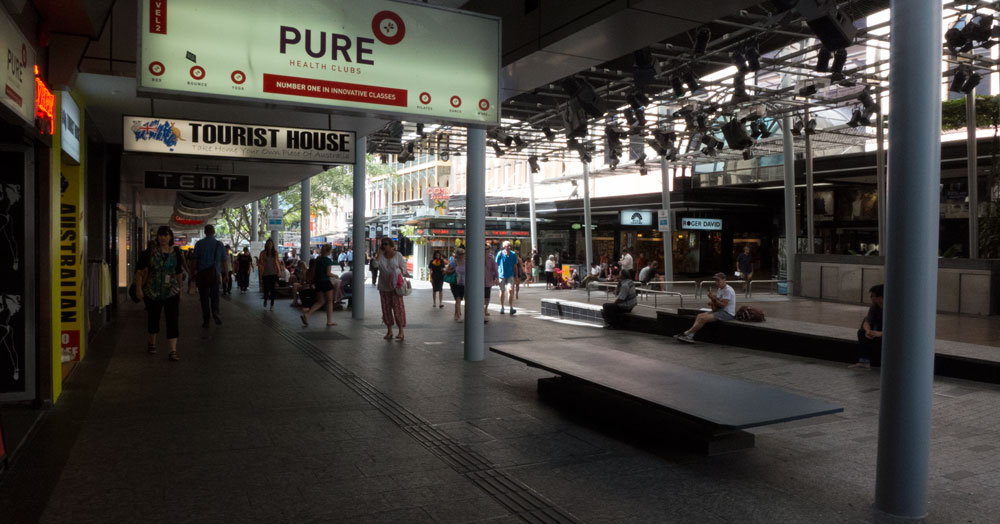 One block from the mall is Brisbane’s Town Hall and City Square. The city square was recently remodelled. It was a very ordinary looking square and now that they the council has upgraded it, it is even more ordinary and quite boring. I suspect its main aim is to be open area for events but for the rest of the time it is boring.

The town hall building is a gem and houses a museum gallery with various exhibitions on the third floor. The exhibition spaces have recently been refurbished and extended. The galleries are worth a visit. 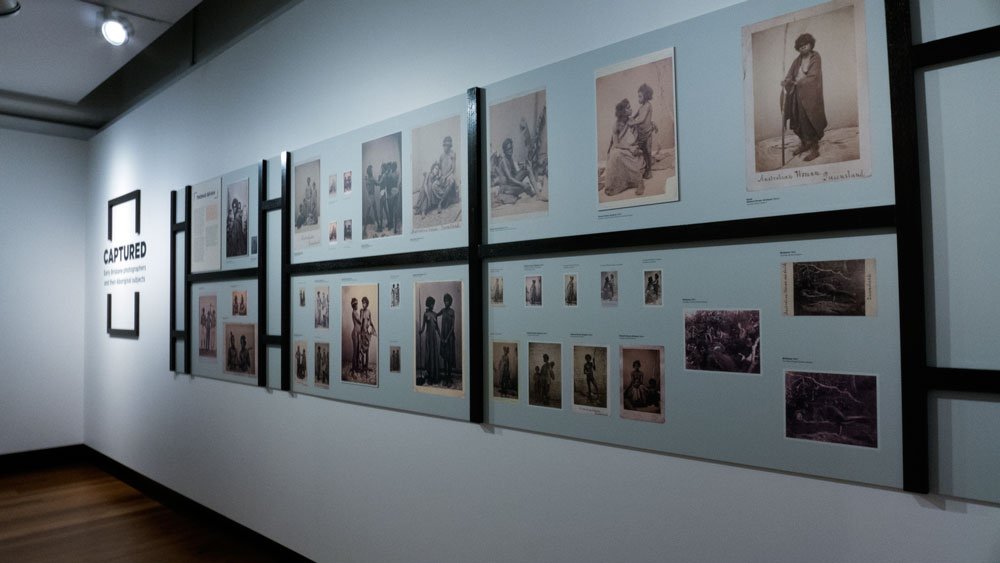 There are several pleasant parks and other treed areas scattered about this part of the city, but mostly it is a hub of noise, clutter and ever-increasing number of tall unattractive pieces of architecture.

There is no doubt that someone such as Alain de Botton would have walked around the central district and would have seen the level of unattractiveness about the whole precinct. It is indeed a mess. Those heritage buildings that have survived and the occasional greenery remain the most attractive parts of this city. In contemporary architectural terms this area is a shambles and there are very few structures that could be listed as of interest.

Any visitor to the city area would notice that there is that beautiful river. The trouble being that the river is cut off completely from the city centre. To enjoy the river one must cross one the many bridges and then look back.

Over the last decade or two I have spent much time in this area of the city. I have never found it overly interesting. In the last few days I have walked the area for several hours around this central area and beyond. In summary I find the precinct to be  generally unattractive and displeasing in appearance.

The developers and architects continue to have fun introducing a full range of boring structures that have now come to dominate what beautiful heritage buildings remain.

Alain de Botton said that aspects of Brisbane are ugly.  In this case , he is right, as the central area of Brisbane is not a  beautiful place. He was also correct to put the blame on those who have let this happen. The city planning authority and the architect – developer lobby of Brisbane seem to care little about aesthetics in the centre of the city.

The next of these will be about the parts attached to the central area. Then I will move across the river  to South Bank and the West End. Then finish with some overall comments.