Following up on comments by Alain de Botton, Part One of Six

Part One – commenting on the News and its response to Alain 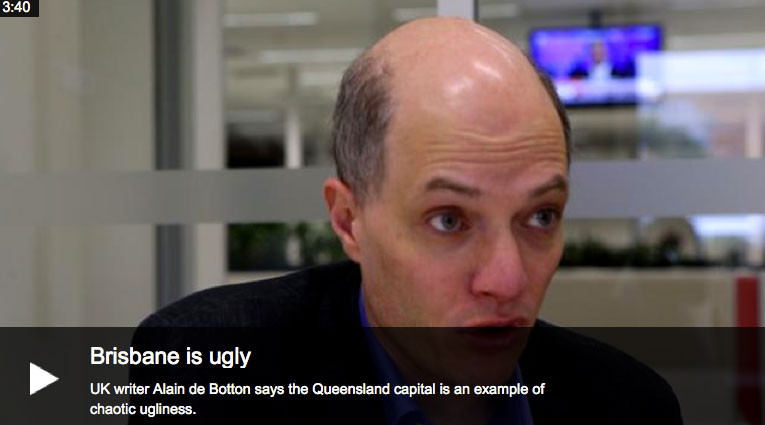 A mild storm recently broke in the media around comments made by Alain de Botton. To view one Brisbane local news piece on this and see Alain respond – click here. I was alerted to there being something wrong here when certain commentators responded. Oh the media just did not read his new book on the media!

Here’s Alain’s blog which makes his point about the failure of the government and planners. – click here. The local rag reported an exaggeration of his words – click here.

Then you get so-called academic voices who start with the divisive statement: ‘Alain de Botton divides opinion‘. To correct, I consider Alain’s opinion are at times indeed strong opinions that can be challenged but that does not make them divisive. Read his piece here.

One of the more worrying response came from the Crikey Urbanist who has a history of strange statements. In this case he missed the point that Alain made  – you can read his comment here – click here. (more on Alan Davies another time)

The debate was hijacked by the media who went for the headline even though they used words that Alain did not use. In his new book – click here – Alain actually talks about how the media mislead their readership for reasons that suit their owners and that they are no longer about portraying the facts. The Brisbane media proved his point and then took umbrage that anyone should question the urban development of Brisbane.

I intend to walk around and explore some aspects of central Brisbane again and will make comment on whether there was any truth in Alain de Botton’s statement.

1 thought on “Brisbane Ugly Part One”