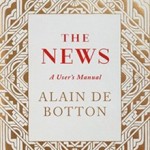 I have pondered on how to react to this little book. It is not really a User’s Manual. It is more of a reality check on what is happening with the news and those who publish it every minute of the day and night.

I recommend this book to anyone interested in thinking again about the news and how news is selected and presented. However I suggest that if you are such a person, then there is a good chance that you are the sort of person who is thinking along these lines already. So why read this book?

This is a book on Alain’s considered thinking on news in relation to politics, the world, economics, celebrity, disasters and consumption. He questions many aspects of today’s news and the news-makers, including the way news is put together, what is emphasized or not, who influences the choices made, the motivations for the news as we receive it, and takes  philosophical  stances in his examinations.

Reading many of the online reviews, this has not gone down well with many journalists. They do not like the idea of a thinker taking apart and being critical about their work and motivations and shortcomings. They have sought out details and questioned specific issues and then allowed that questioning to mark down the whole exercise undertaken by Alain. Surprised? Here’s a reasonable review from San Francisco – which also provides another introduction to the book – click here.

One area that he does not get into this book, is the history of the destruction of the ability of news to produce quality information. This is covered in a book reviewed much earlier, Flat Earth News by Nick Davies (2009) – click here.

Generally speaking I agree with Alain’s arguments and points of view. The news we have today is not all that great unless you have the time and inclination to surf across several sites to put what is presented here into some form of context.

The ABC (Australian Broadcasting Corporation) used to be a great source but now has been messed up by the race to produce headlines and to keep pace with the 24 hours news cycle. It is closer to the mainstream media style than it once was a decade or so ago. Some of its recent online reporting has been terrible.

The present ultra conservative government thinks the ABC and its news is not balanced. I agree, but for different reasons. The ABC lost its mode of presenting facts back in the days of the Howard government and this unsavory behaviour continues through to the present.

Many of its journalists became obsessed with finding fault and demanding answers to sometimes very silly and ill-informed questions.  Or worse still, questions based on media releases and the current Murdoch headlines.

Their sense of reality has become way out of balance with what news could be. Long gone for these journalists and producers is the ideal of presenting news in context and without a concentration on looking for the fault and negative aspect in the individual.

I would go as far as to say that what sometimes is called ‘investigative’ journalism by the ABC, often amounts to not much more than the ABC reporting being equivalent to online trolling and a distortion of the facts in order to concentrate on attacking individuals. Too often several of their key reporters adopt a vexatious style of chasing after individuals once they have been declared fair game. Facts do not get in the way of a hot topic in many of the ABC’s stories, especially on what they call current affairs programs. There are some great ABC programs but their news is no longer balanced and reliable.

Sadly for those who believe in the need for the public broadcaster, the best news journalists and news programs are to be found elsewhere and online.

During recent national events, such as national election campaigns, it seemed more as though Murdoch was the main influence for what stories our ABC ran. I still wonder why the ABC’s Radio National insist on reading the newspapers headlines every morning. Dumb. The main stream media simply makes sure that whatever message they want to be broadcast via the ABC is put on the front page of their newspapers. The ABC then provides a free advertisement for the newspaper by reading them out. Dumb.

And I still have no idea why the ABC has a dedicated news station! It is a waste of time and money especially when there are so many other reasons for a separate TV channel. There are several good programs on ABC 24 that could be easily be relocated to the main ABC station and then ABC 24 used as an extensive cultural channel.

But all is not lost. Australia now has the benefit of the Guardian online as well as access to several other informative online sources. The Guardian has a some good journalist – such as Katharine Murphy, some not so good ones – and much more of interest in sections such as Comment Is Free.

So back to Alain De Botton and News, A reader’s Manual. I found Alain’s  book probably more one that affirms many of my views and allowed me to rethink some of my thoughts on current practices. It is not a heavy read, but he does make points that make you stop. stare and rethink.

Yes it is recommended, but maybe read Flat Earth News first so you can understand the historical sources of the problems with our news.