Memorial declares war on its trees

The residents of Canberra love this city because of the trees. There are numerous occasions when people have had to rally to save our trees.

Despite this, we continue to witness various agencies bringing down trees for all manner of spurious reasons.

And before you think that I am going to again mention some of the worst recent examples of tree destruction such as the 100 or more along West Basin, the rapidly disappearing Downer heritage trees or mention the notorious City Renewal Authority – you would be wrong.

This time it is the Australian War Memorial that has signalled that it wants to bulldoze about 60 or more trees. Of course, its reasons as outlined in a submission to the National Capital Authority (NCA), are that the trees must go to make way for the totally over-the-top $500 million expansion of the museum.

One seriously misguided action (the expansion) is to be assisted by another (the destruction of precious and significant trees).

The NCA has made some token efforts to promote the importance of trees. But do not hold your breath that it will be doing much to save these trees at the AWM. Those West Basin trees were expendable – so why wouldn’t those around the War Memorial suffer the same fate.

Have a look at the red bits in the planning document below. On my count, about 60 have already gone to make way for the new carpark to the east and now about 65 more have been marked for destruction. 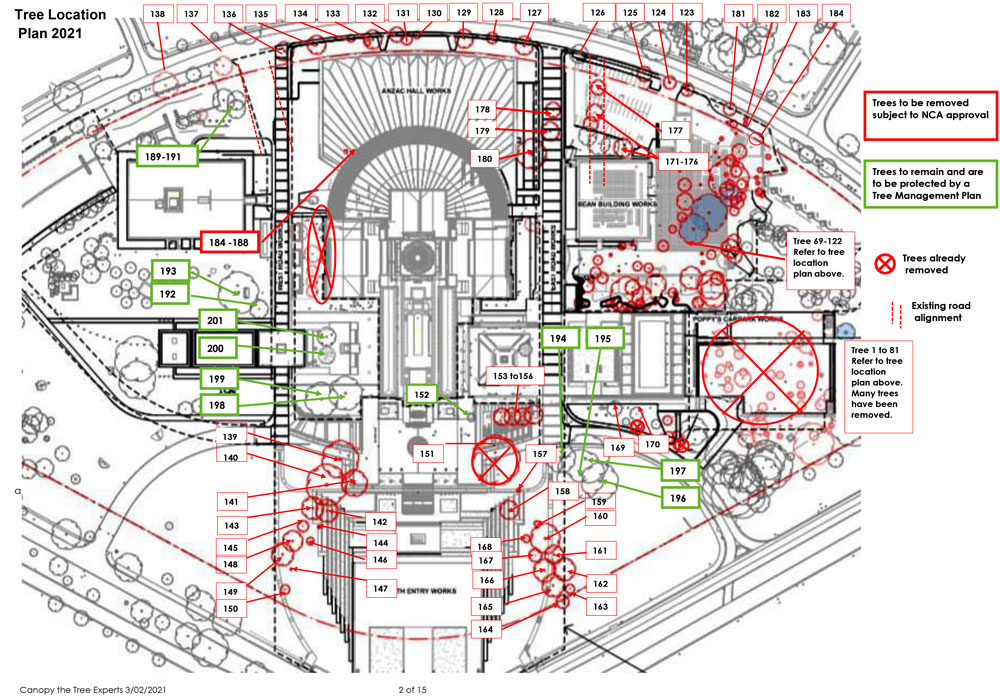 Included in this vandalism will be some very significant ones such as the massively beautiful ones to the west of the front to the memorial building.

The War Memorial used to care for its trees. I know this because I have been in contact with Stewart Mitchell, who is the former head of Buildings and Services at the AWM.

Stewart can tell you how much the staff used to put into the care and occasional replacement of their trees. They were important to the site and the staff were very conscious of their stewardship responsibilities.

Something has changed. Stewart and others have been gutted by this news. This is not the place they used to work for and were proud of what they achieved – the care of Memorial’s trees.

In this era when every tree is important, when the city needs every piece of biodiversity and green infrastructure to deal with the coming climate crisis, how on earth did anyone at the War Memorial think it was okay to let the bulldozers lose on so many trees. In the end this could be 100 or more trees that will go.

And so, we enter that space that the people of Canberra know too well. There are many times in recent years when the intelligence and the stewardship of the National Capital Authority has been tested.

With all the talk about the importance of trees, now is a good time for the NCA to stand up for the climate, to re-assert their responsibility to be stewards of the nation’s capital and to simply do the right thing by these trees!

I join with others in the hope the NCA will not agree to the War Memorial’s insensitive and destructive proposals to remove so many trees.

The NCA has listed this proposal on its website – and is open for responses until the end of April. Save our trees from these barbarians!