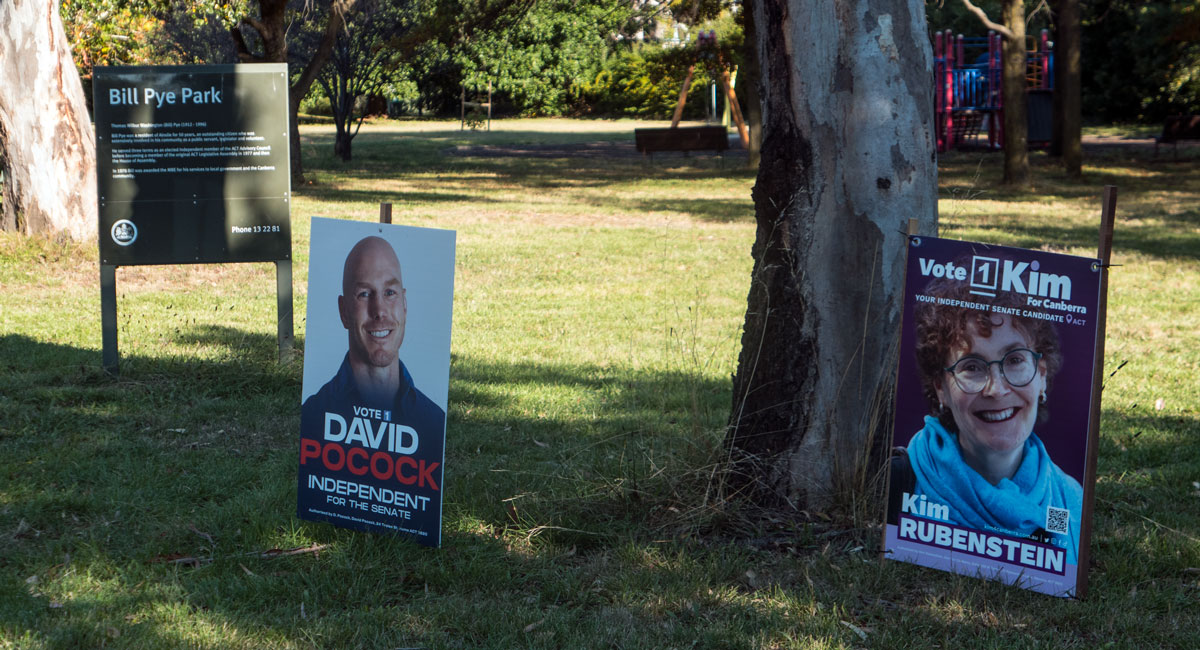 The inner north has, so far, not been saturated with the roadside election corflute signs as has happened with previous elections.

The better-known independent candidates, Kim Rubenstein and David Pocock, had some of theirs out early, with a flourish of placements once the date for the federal election was set.

As with previous elections, occasionally a sign is up one day and gone the next – and sometimes replaced with an alternate candidate.

One amusing event during the 2020 ACT election was the appearance of about six roadside signs for one female ALP candidate that within hours were replaced with six for a male ALP candidate. ALP factional disputes aired in public!

The ACT Greens go on about how the roadside corflutes pollute public space and that they no longer use them. This is an effort to suppress opportunities for other candidates to get the word out that there are alternatives to the three major ACT parties.

Well before the date was set for this federal election, the ACT Greens had loyal members place large signage in the front of their homes. There is a huge number of these billboards around the city with many on public land – the verges in front of houses.

Obviously, the ACT Greens use their own definition of visual pollution. According to their bible of how to keep a well-paid job, roadside corflute that enhance the prospects of independents should be banned. Meanwhile, the well-funded Greens are allowed to dominate suburbs with their own versions of billboards on public land (verges) and in front gardens.

This is the ACT Greens’ version of participatory democracy. Those with the cash received through pay-outs from previous elections set the rules to favour those in power.

Their advice for hopeful independents is that they should not get between the ACT Greens and their opportunities to set rules to keep them in well-paid jobs.

Then there is the question of good design. Being a roadside sign, the passing motorist or passenger has a very short timeframe to get a message. One candidate has failed on this. There’s a particular sign – I think with two faces on it – but as yet have no idea what party they represent.

The ACT Greens in their push to ban roadside corflutes need to think seriously about how democracy works and how corflutes are an opportunity for the not-so-well funded candidates to spread the word that there is an alternative choice.

Any efforts to suppress democratic processes should be resisted. There’s too much of that already in play in other countries such as the US and well-known autocratic states.

As long as candidates stick with the reasonable restrictions already in place, the use of corflutes for elections should not be banned.

Corflutes appear only for a few weeks each election. They are an indicator that democracy is at work. Let’s be proud of that.