Greens do not react to more trees being removed! 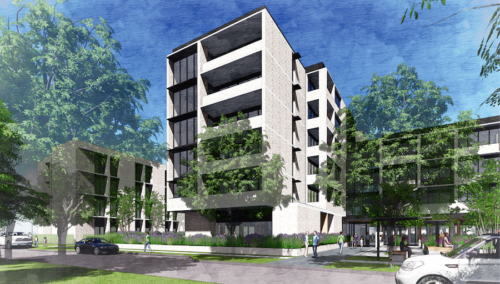 The ACT government is hoping to plonk Common Ground onto Section 72 in Dickson and is asking for feedback on the concept design for the building and site design.

However, the more important issue is the draft variation being proposed. To quote from the government planning site:

Draft Variation 367 proposes to rezone block 25 section 72 Dickson from commercial CZ6 leisure and accommodation zone to CFZ community facility zone to facilitate development of the Common Ground housing model. Common Ground is a housing model that accommodates people who are homeless or at risk of homelessness, as well as low-income tenants. Supportive housing is prohibited in the commercial CZ6 zone and community housing is currently not defined in the Territory Plan.

We all understand that!

What we do understand is that this tricky and unique variation will allow for a six-storey apartment building on a site and then be used to justify more elsewhere on section 72.

All this ignores that the community very clearly keeps saying that anything on this site should not be above three to four storeys – not be above the tree heights.

Just as worrying is that there is not enough parking allowed for the 40 housing units planned.

Their spin is meaningless on this. No matter what the purposes of the complex, the tenants will end up with cars, with guests and with visitors.

And then there are the trees that are to go.

This site will have new roads around it and to do so it is estimated that 50 mature trees may have to go along with damage being done to the root systems of others.

Add to that the mystery around the flood maps as mentioned above, and you would think that any progressive politicians worth their money would have by now have spoken up. Nope – not a sound.

The ACT Greens are out of sight, hiding behind the fence again.

When do our local politicians show some honest support for their constituents and their common sense aspiration to keep the mature trees we have and to speak out against questionable developments?

This is not good planning.