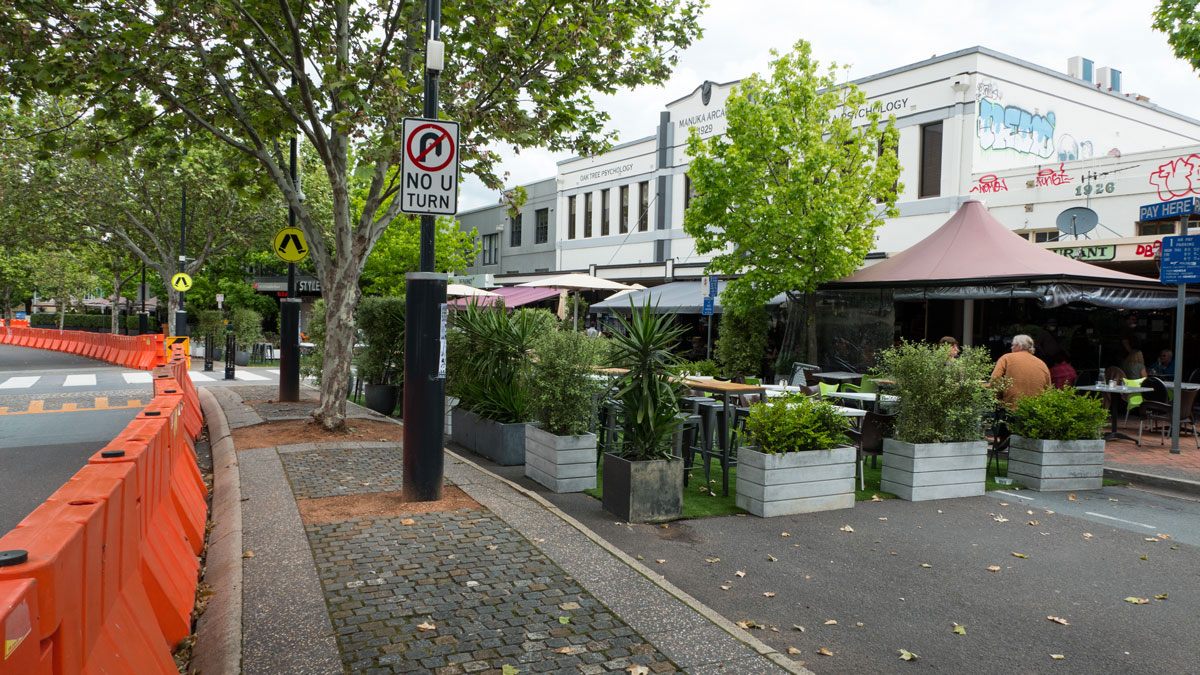 The south side of Franklin Street, Manuka, was shut off during November for several clusters of seats and tables on fake grass. It was apparently another of this government’s pop-up experiments.

Taking over the parking spaces and part of urban streets is an idea that has been around for several decades. The successful version kicked off in San Francisco in 2005 and has since spread across the world.

PARK(ing) Day occurs in mid-September with design studios and other collectives having fun. Spaces are claimed, sometimes as long as the meter is fed.

It can involve design innovations and wonderful crazy ideas. Other groups use secondhand household furniture as well as some things especially constructed on site. The events work when people are attracted to sit around and enjoy themselves or even sit quietly and enjoy the novelty of the space.

What happened in Manuka was a bit sad. Someone obviously had heard about the idea of taking back part of the street for people to enjoy. But they missed the point. There was nothing fun about the scattered placement of the standard ACT government pop-up seats, tables and obligatory planters.

This experiment failed because it did not involve design or the expertise of creating aesthetically attractive urban spaces for people.

To hammer home how badly this was done, the street was surrounded with large orange construction barriers. It was an ugly look. It looked as if the street had been closed for construction. These dominant barriers ensured any patrons would feel enclosed as if they were in danger from evil things beyond those orange walls.

The ACT government is not doing well when it comes to design of our public spaces. The Tuggeranong revamp along Anketell Street is exactly what Liberal MLA Mark Parton said it was. It was the largest speed bump in the world with a few bits of street furniture and underwhelming decorations. It is an expensive and boring addition to Tuggeranong.

Meanwhile, over in Weston the locals had campaigned for an upgrade of the small park on Brierly Street and Trenerry Square. The community council gathered the ideas and submitted them to the ACT government.

What appeared in March, 2018, was nothing like what had been requested. Lots of hard surfaces and very little shade as requested. This expensive and unpopular design work is about to be undone with new consultations underway to identify what the locals want. Maybe someone in government should re-read the first submissions from the community council and design according to that very clear brief.

The inner north has been littered with the City Renewal Authority’s expensive pop-up activities. After millions of dollars, not much has survived. Some faded paint here and there, some twisted version of a park outside the swimming pool and a scattering of chairs and potted plants throughout the shopping centre. There will be no design awards handed out for this useless clutter.

And to return to the concepts behind claiming back the streets. Good design can deliver, and has delivered, some fabulous new spaces. The investment in having experienced and talented designers influence the outcomes is definitely worth it.

The ACT government used to be reasonably good at using designers. Not anymore. The results today are usually very amateurish and quickly removed.

The closure and re-use of streets is to be encouraged. Such initiatives will have a divided response – that’s guaranteed. Some want more. Others will oppose it as it disadvantages the car driver. To make such stuff happen requires an experienced design leader. This is something this government lacks and it shows in what is being thrown up around the city.

What happened at Manuka was a missed opportunity. A new concept should be explored with experienced landscape architects and professional placemakers. If the government planners could do their job and get onside with the Liangis development and get that building done, something very good could come of a revamp of Franklin Street. And maybe a few other streets around the city.