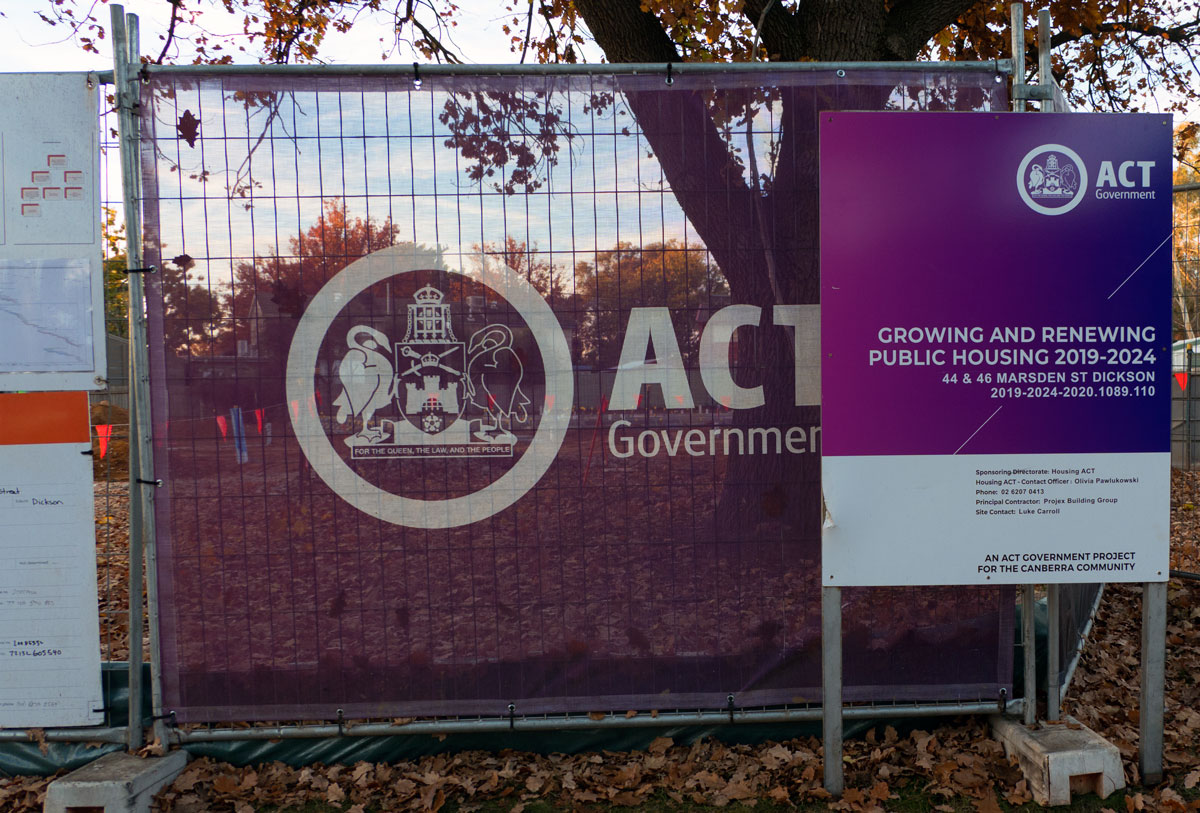 The majority of candidates going to ACT elections talk about how they will be progressive on issues that matter. But once elected, the reality is something else.

For an indicator of what matters to this government, look no further than the constant spin about its top priority – the infrastructure projects associated with the extension of the tram to Woden.

Besides health, hospitals, education and urban issues, the issues that should be “the” priorities for a government claiming to be progressive must be delivering all the social housing required and providing shelter for all the homeless.

There’s no doubt that some of the refurbished and newly built social housing houses and units are looking good and are welcomed. That is, those not being built on what is classified as community open spaces or sites previously set aside for community facilities (housing is not community facilities).

At a moment’s notice, the ACT government can produce the spin on how much it is spending over a number of years on housing and helping the homeless. Its spin doctors prepare these statements along with the advice for their ministers.

Don’t look up! Otherwise they would see how their disingenuous spin does not match the reality of what is happening with the number of homeless increasing and the lack of social housing continuing to condemn people to desperate actions.

The current investment in redevelopment and providing new social housing are belated efforts to catch up with a decade of under-investment. The priority in spending remains the various projects associated with the tram south to Woden (more on that in a piece to come).

The government won the last couple of elections because of the failure of the opposition to appeal to the electorate – for reasons that would require more space than is allowed for here.

The winning parties list many things as their mandates. The reality was they were the best of a bad lot and people had to vote for someone and too many of the other candidates were not credible.

The ACT Labor/Greens coalition has a mandate to govern. That mandate includes ensuring that everyone in this town has a roof over their heads. On this they are not successful.

Please re-read the 2021 research-based pieces in City News by Jon Stanhope and Dr Khalid Ahmed published on November 24, December 1 and December 8. Their findings are devastating for voters who thought that the ACT Greens and ACT Labor were committed to “Building a Better Normal” (whatever that was supposed to mean).

To paraphrase from their work: Between June 2011 and June 2020, the ACT’s population increased by more than 63,000 people, meanwhile in the same period, it appears that public housing stock in Canberra has declined by 874 dwellings.

This government has its priorities wrong! The emphasis remains on spending big on developer-driven vanity projects such as West Basin, the tram going south over Commonwealth Bridge to Woden, the convoluted reasons why Woden has to have a new site for an interchange, and the behind-the-scenes plans to “urban intensify” suburban areas and green spaces alongside the southbound tram.

The losers from this government’s priorities are those without adequate housing in a city that can afford to have all citizens housed. The policies of the last decade have been more about ideological egos of political leaders and their favoured lobbyist colleagues.

If the current politicians crave vanity projects, delivering on top-quality social housing and having a city with no homeless people would be something to rave about.

Instead of spruiking how much is to be spent on these issues, the challenge is for all in this government to make it clear when Canberra’s social housing problems will be solved and when will volunteer groups such as Canberra Shelter be no longer required.

If the ministers for homelessness and social housing have not delivered on these issues by the next ACT elections, they will go into those elections as ministers who have failed the vulnerable of Canberra – let alone those voters who thought they were voting for progressive politicians.