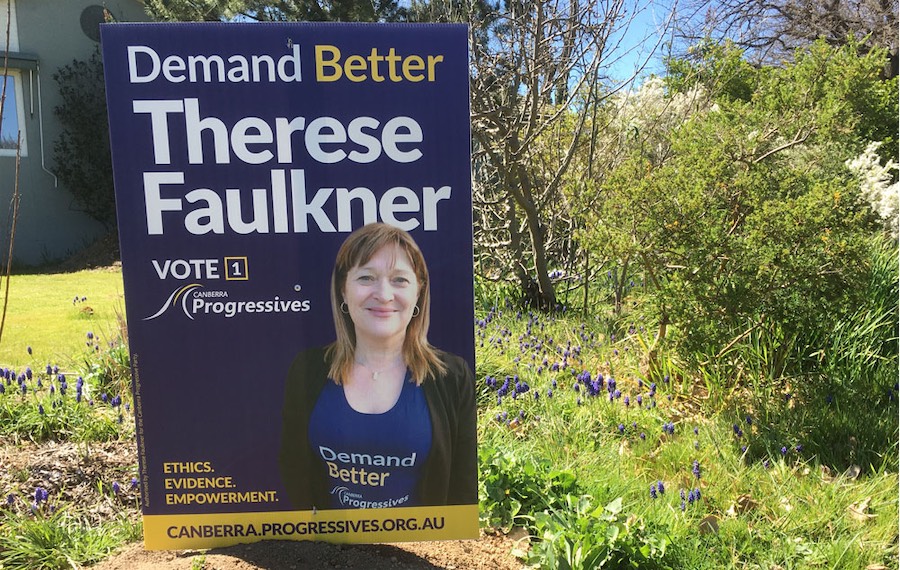 There are corflute wars again with the ACT elections.

Candidate Therese Faulkner had one of her Canberra Progressives’ corflutes removed and replaced by one for a Labor bloke running for the seat of Kurrajong.

below as appeared originally

It seems that whoever is doing this cannot tell the difference between how normal
people behave and how those in major parties do anything to get noticed, no matter
how nasty or insensitive.

The corflute was on private property and the Dickson householder, who had invited the Canberra Progressives to display their message several weeks ago, was so incensed by Labor’s intrusion that he hit back.

He reversed the Labor corflute and wrote a statement, making clear his disappointment for locals to see and pointing the finger at ACT Labor.

Here are his words on the responding corflute:

“Some Labor-voter has destroyed my ‘Canberra Progressives’ corflute and has
replaced it with this ALP placard.
This is not the action I expect to see in an Australian election!
It is utterly opposed to our understanding of electoral tolerance.
I am a lifelong ALP-Green voter, disillusioned by the Barr government’s
arrogance in taking voters for granted.
I deserve to have my views expressed and respected.
Removing other parties’ advertising is a low Trump-like act – it’s not as if
Canberra isn’t already plastered with adverts for the major parties.”

It is indeed very disappointing to see what is mean behaviour by naughty boys within
the local “nasty party” being played out on our suburban streets.