Excitement – Coe goes without his tie! 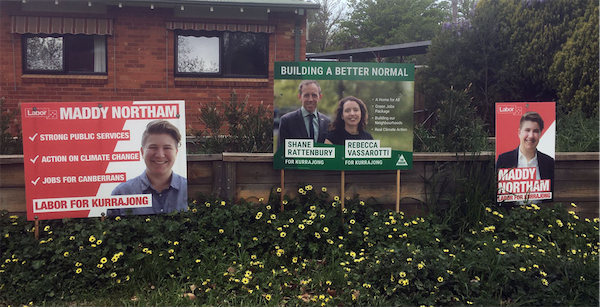 With one week to go to the ACT elections, my interest has definitely reduced.

I am no longer paying much attention to the constant stream of commitments and statements from the candidates.

Even though I would count myself as someone who watches politics closely, this election has been a hard slog. It has been one of the least interesting.

I have already voted, so maybe that is part of the reason why even writing this piece is an exercise in defeating a lack of enthusiasm.

The leaders of the three parties collectively are a mundane bunch of blokes. The most exciting thing that has happened according to the media’s reporting was when Alistair Coe took the stage at the Press Club with no tie. He caused a scandal by going rogue by having the top button of his shirt undone! OMG! What next? (Don’t think about that).

“CityNews” political reporter Belinda Strahorn has been doing a wonderful job writing about the goings-on with the corflutes along the sides of streets around Canberra. Here’s a few more from here in the inner north.

There’s a house on a corner nearby that used to have their cars adorned with ACT Greens stickers. When the elections got underway, the same house had a corflute in front for the Progressive Party – with Therese Faulkner smiling at us as we walked past. Another disgruntled Greens voter?

Yesterday I noticed that Therese had been replaced by a corflute with a Labor bloke – pretending to know how to smile. What the hell happened there?

Further away we walked past a household that was having a bet both ways – with one of those ACT Greens “Building a better normal” signs (you do wonder who thought of that). Mysteriously on both sides of the Greens banner were corflutes for Labor’s Maddy Northam.

Not too far from that household is a curve on Majura Avenue next to Ainslie Oval that is usually a prime target for corflutes for all the major party candidates.

Until recently there would have been more than 20 Labor and Liberal faces along that stretch of the road. But sometime last weekend, someone smashed all the Liberal faces – with bits scattered around and only the Labor corflutes remaining – plus one Progressive Party corflute (must have been acceptable to whoever was anti-Liberal that night).

To finish with my corflute stories, there was the incident on Majura next to the Dickson Wetlands. On the first Saturday for corflutes, someone placed about six corflutes for Judy Anderson. Not long after all these were on the ground and had been replaced with a bunch for one of the Labor blokes. In-house fighting maybe?

The corflute stories have become the only tales of interest during this election campaign. At least they serve to remind people that the elections are on. Otherwise I suspect many may have forgotten about the whole event given how dull it has become.

While the voters have little say in who gets to stand for election, it would be good if all parties consider the sad reality that Canberra has not done well with lively and interesting people standing for elections. Collectively, we have a lacklustre lot in this government.

Surely it is time for someone akin to Jacinda Ardern or Justin Trudeau to step forward for the 2024 elections and to spark some overdue interest in what the next government could be and get people interested in how the workings of democracy can be fun.