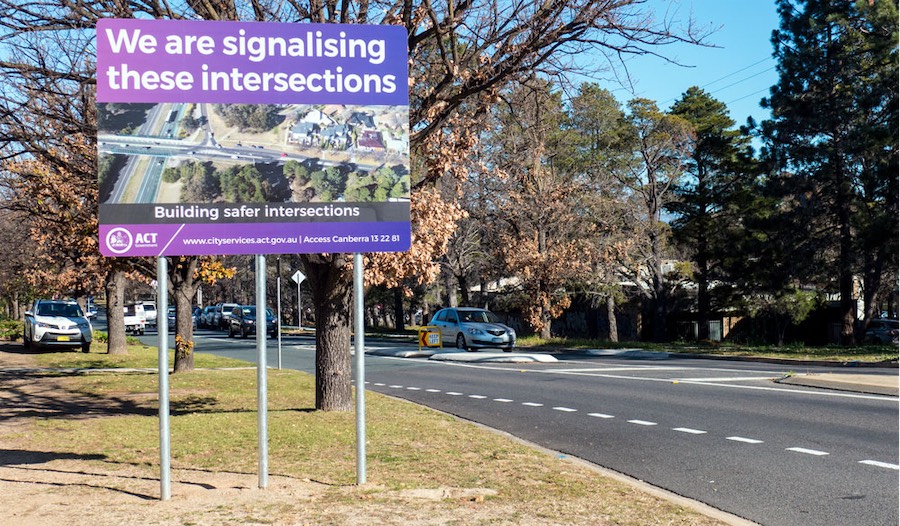 The sign above is in Deakin and placed after an intersection and well before the next.

If it is to warn people to expect something, it is not clear which one is about to get traffic signals.

That word “signalising” would make most people look again (while not looking at the road) and be saying to themselves: “What is that about?”

And the royal “we” always sounds patronising and is usually used by royalty – such as: “We are not amused!”

Is this the new normal – being how the Green/ Labor government see themselves – being removed from the common people?

Roads being the responsibility of Chris Steel, Minister for Something, I expect we will see him out there soon with his yellow, high-res vest doing his normal thing of pretending to dig the first hole. 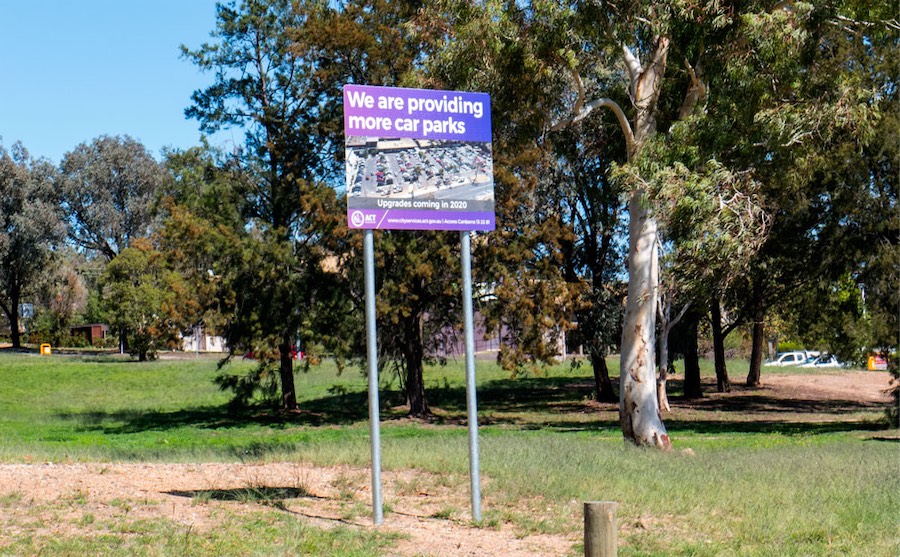 Meanwhile, the infamous sign that appeared on parkland next to Cooleman Court in Weston, definitely sent a message to the locals.

No debates required – decision’s made!

This is again down to Chris Steel, Minister for Something and local member.

This was about the car park that the bureaucracy had decided was needed because the government could not solve the Coombs/Wright shopping saga.

People in those areas are having to drive out of Molonglo to shop at Cooleman Court. This has become the new normal for these residents.

However, the Weston Creek Community Council has provided evidence that with some rejigging of the present car spaces, the same number extra numbers could be made available.

There is absolutely no need for Chris Steel, with high-res jacket, to bulldoze the park.

This sign served to remind people of the stupidity of this government– and possibly how Chris Steel represents the government to the residents – rather than his representing the views of voters to government.

It is election time in the ACT. Signs are appearing.

This one from the ACT Greens seems to be designed by a dumbed down group think-tank.

If the purpose was to provide some worthy words that commit the Greens to doing not much – then that certainly works.

The other interpretation could be that they want to change what normal is. That could be a bit scary! Sound a little too much like Big Brother will be controlling you!

As for the list to the side, people are not dumb. They know that the Greens have been part of the ACT government for 10 years – so any of those targets should have already been in place.

The real challenge for the ACT Greens is to convince people that, if they are the power brokers again, that they do not trade away so much of their policy agenda (including working with residents – not against them) to be given the prize again of being in cabinet.

The contract that the ACT Greens had with Labor after the 2016 election was devastating for the ideals and values that voters thought the Greens stood for. That Greens/Labor contract broke their bond with the electorate and did them a lot of damage.

There was a mountain of issues that the Greens neglected. Numerous times they were seen to be sitting on the fence and saying nothing – as was the case with the majority of contentious planning issues over the last four years.

That sign does not promise much. Is that the Better Normal they will be building? It is an easy target as all they need to do is – do not much again. 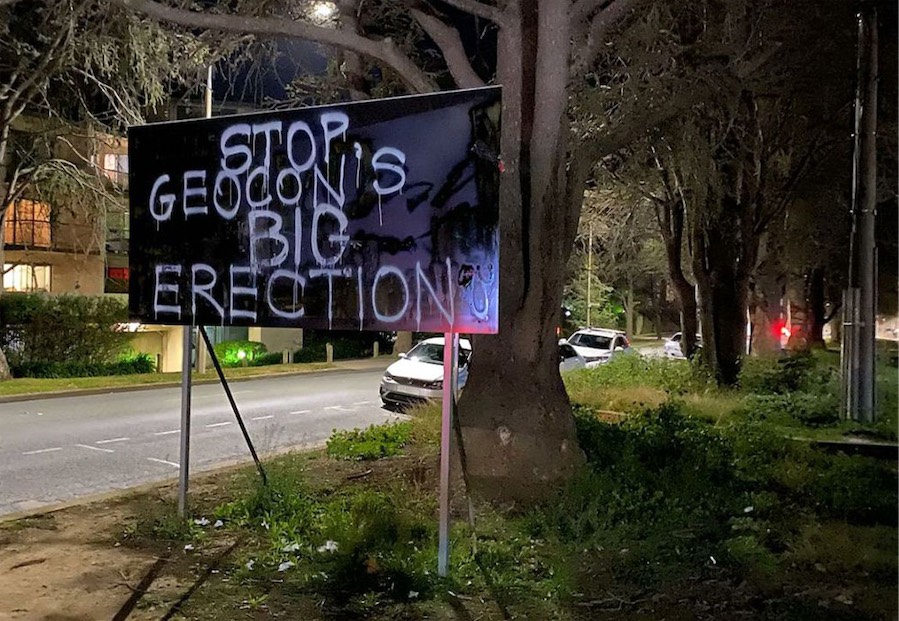 How could a piece about signs not mention what happens when residents get upset?

The better normal (to use a timely phrase) for the ACT Greens/Labor government has been to encourage the barbaric demolition of Canberra as the Bush Capital. The better normal includes not being nice to residents, playing tricks to deceive residents and to ignore submissions made on planning or development issues.

This government works on the basis that no matter how bad the government or the developers behave, the politicians and their bureaucrats can rely on the residents being polite in their responses.

This is the new normal that has been built into the planning system.

Every now and then the residents do not play along and they take a little direct action.

The painting over of the For Sale sign on the Geocon apartment site in Kingston was a small outpouring of frustration.

Given how bad things are, maybe it is time for the normally well-behaved community councils to consider more actions that are outside the new normal expected of them.