Comment: on being True to the Planet can mean sometimes you have to just say no.

How are we being served by our professions in their provision of buildings and landscape projects? The highest priority for the future of the planet remains that every action be taken in the context of addressing climate change adaptation.

There are numerous TV programs showcasing building and landscape projects. Many of these programs involve professional consultants, usually architects, in the design and project management. By the second decade of the 21st Century it should have been normal that the architects involved in these projects would be insisting that their designs identify realistically with addressing climate change issues. Sadly this is not the norm.

Take a walk around any inner suburb and observe what is being built in the name of redevelopment. There will be exceptions, but most of it now is being built as if there was no environmental issues to be concerned about, let alone any climate and planet issues to be addressed. Most apartments are produced with no solar or water recycling in place. The trend is to have loads of air conditioners built in. The net effect of most contemporary development is that it  likely diminishes, rather than enhances, the green infrastructure of the suburb. 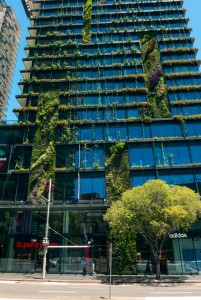 Too many architects and related consultants are happy to be part of the green wash applied to so many new developments and buildings. There will be the token green wall or even a small community garden and some other plantings pretending to be contributions to addressing sustainability issues.

The worst example seen recently are the very expensive green decorations applied to the new Central Park complex in Sydney. Another is the token green facade hanging off the Nishi Building in the New Acton Precinct in Canberra.

And who takes the blame for these urban crimes.

I point the finger at the planning authority for allow such omissions and crimes through their planning regulations, the politicians for not taking responsibility for the planning and lastly, the professions, such as architects, for continuing to saying yes to designing such urban tragedies. These people are about making money – which is far enough – but they purport to be committed to addressing climate change and related matters. The proof is in what they produce.

Witold Rybczynski recently wrote a small essay online that addressed the notion that architects should learn to just say no. I agree but also include a couple of other professions as well. Too many are running around making statements of concern about the climate and related environmental and social and health issues, but continue to be totally compromised in what they are willing to work on.

So to answer the question – how are we being served by professions such as architects?

The answer is very simple. Very badly. The majority of architects should be ashamed of what they are leaving to be dealt with by our future generations.

Architecture, and other related professional activity, being delivered in the 21st Century is not acceptable as any form of good design if it does not seriously address climate change adaptation. They must collectively learn to say NO. And they must avoid putting out the spin that justifies all the green wash we are witness to in recent buildings and related projects.

One has to ask: Where is the 21st Century leadership in architectural and urban design?