Development dilemmas: part one
Residents and the future of the Dickson Shops 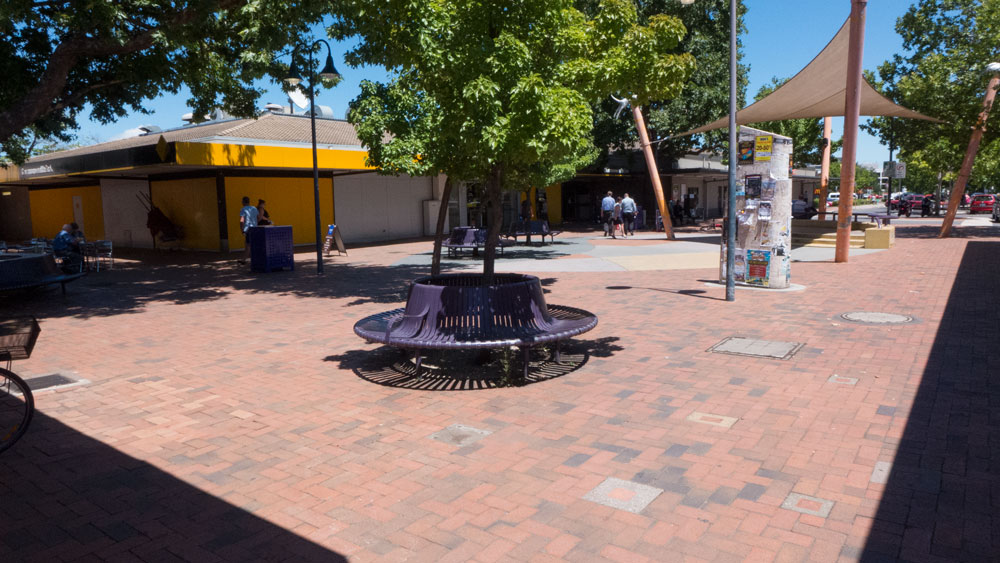 The development application for the new supermarket complex appeared online before Christmas and residents were initially left to respond during the Christmas/New Year holiday season.

The Development Application being considered for this new supermarket site within Dickson has certainly confronted local residents with a dilemma.

In earlier discussions about Dickson, the consensus was that despite the centre having developed a friendly atmosphere, some visionary developments and upgrades were necessary to respond to the growing number of residents moving into the precinct.

Dickson residents and present store holders had actively participated in the development of a new Master Plan for this shopping precinct. As things progressed, residents argued that the document seemed to be more a wish list and provided very little useful guidance details. It was also noted that the plan was not connected to any legislative processes and therefore may be ignored in future developments applications.

The residents group did not agree to the outcomes and the shape of the Master Plan for the Dickson Group Centre (the shops). Despite the residents’ disagreements, the government signed off on the plan.

The first major initiative following the Master Plan fiasco was the concept of the car park site being developed as a complex containing apartments, a supermarket and other smaller commercial outlets. Local residents initially responded positively to the idea of an alternative supermarket being built next to the present Woolworths. This was guided by the ACT Government’s visionary policy to attract different supermarkets into Canberra, as much-needed competition to the dominance of the supermarket corporate duopoly.

The ACT Government’s supermarket policy, as introduced by the then Chief Minister,  Jon Stanhope, promised a change to the dominance of the large supermarkets. Locals were led to believe that we could see alternatives encouraged to open in our shopping centres under this forward-looking policy. It was not to be so. It seems that this policy has been quietly shelved after Jon Stanhope departed.

The proposal for the new supermarket site that was uploaded for comment over the Christmas break has stunned many into silence. This proposal is just so wrong for Dickson. The shock for residents has been that if the development application is accepted, the present dominant supermarket corporations will have their position enhanced rather than challenged. And the supermarket competition policy?

Most astonishing has been the lack of real attention to the many climate and sustainability issues within this development application. Anyone who deals with the ACTPLA and its legislative requirements very quickly realises that at best it requires a low form of Green Wash within its development guidelines. There are no serious 21st Century green infrastructure, landscape, solar, alternative energy, water re-use or climate change requirements to be met.

For a government that has taken initiatives in alternative energy supply, it is doing almost next to nothing about addressing climate, environmental issues through the planning and development processes for Canberra’s urban areas. In fact as developments are being approved across the older suburbs, there is a gradual degrading of the amount of tree cover and the suburban biodiversity. Opportunities to enhance green infrastructure, increase solar and water re-use and associated strategies are being lost.

As climate challenges increase across Canberra’s urban areas, the likelihood of these being dealt with continues to be reduced as a result of the inappropriate developments being encouraged and approved on a daily basis by the ACT Government.

The ACT Government may at times promote glossy policy statements but the reality is that what is delivered at best is Green Wash. The ACT Government has failed to implement anywhere near basic environmental and climate policies to deal with the challenges of delivering future sustainable settlements across their jurisdiction.

The residents have the opportunity to respond to the development application for the Dickson supermarket site but are very aware that at best they can only now tinker around the edges. The major aspects of this proposal are not up for negotiations. To allow this would signal that the whole process to date has been flawed. The agencies involved are not about to admit anything such as that. That is not within their nature.

Many people will blame the developers involved in these development applications. This is understandable. However the truth is that developments such as that proposed for Dickson supermarket site are a consequence of the developers responding to the inadequacies within ACT Government’s development requirements.

The developers do what they do – because they can and the ACT Government through their planning authority allows them to do so.

Despite all of the above, residents wish to be engaged in decisions about their local urban areas. The dilemma for residents is to undertake arduous actions to bring about change or to stay silent and allow all these golden opportunities for change to pass by. Given that the ACT Government planning and development system is viewed as being hostile to the aspirations of the local residents, the option to remain silent would be the most peaceful option and would be less harmful to resident’s heath and welfare.

One wonders whether the bureaucratic bullying of residents over planning and development is to be listed by the individuals in government as one of their key performance indicators?

The fault is very much with all the elected ACT politicians and their lack of attention and transparency in dealing with local urban issues. The culture of the ACT planning and development agencies needs to change. But such decisions need to come from the elected politicians.

One wonders whether the ‘Captain’ in charge is capable of visionary leadership and of making such decisions.