The centre of Melbourne has a tremendous network of laneways. Many are well established as alternate routes to the main streets. Many of the laneways have cafes, and in more recent years, many have become havens for all manner of street art. 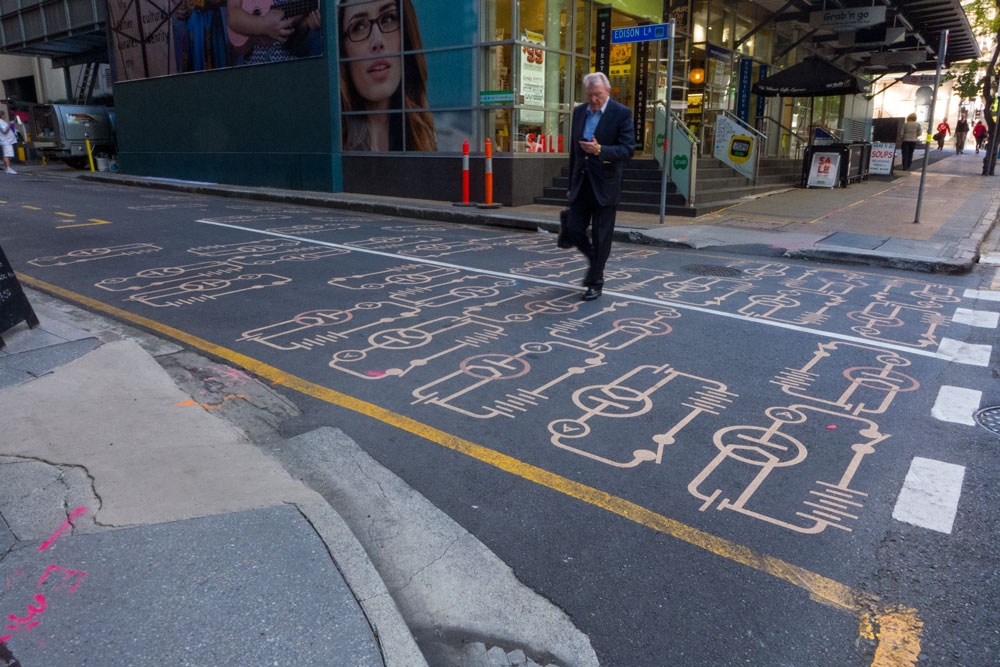 Other capital cities have since become interested in programs to revitalise these often overlooked places. Brisbane City Council has its Vibrant Laneways Program – click here for the link on the council site. The program has been underway for a couple of years.

The online information is absolutely full of enthusiastic art speak and has the intention to intrigue and to encourage visitors to see these placements of visual art in laneways.  Ambition is a wonderful attribute for a city council project officer in charge of such a program. There’s a PDF online that contains some very ambitious arts speak to promote this program – click here.

On a recent visit to Brisbane, during the first week of July, I made my way around the CBD to see three of these laneways.  I wish I had not read the online PDF as it definitely raised my expectations. In short, the artworks are of interest and any attempt to get artwork outside into our streets has to be encouraged. But let’s keep it real please!

A big consideration for any placement has to be that it looks like an artwork, is where people walk, and is not in danger of blending into the multitude of visual objects already crowding out in street. In the case of the first below, it was placed up a laneway that was a dead-end, so the number of people using this lane remains minimal except for deliveries. Passers-by along the street stood little chance of noticing the board as it simply fitted in neatly with the spectacles advertising closer to the corner.

I am not sure what the painted designs were on the roadway, but maybe they somehow alerted some to the fact that there was something up the laneway – or were they left over from a previous work. (see the banner image up the top of this post) 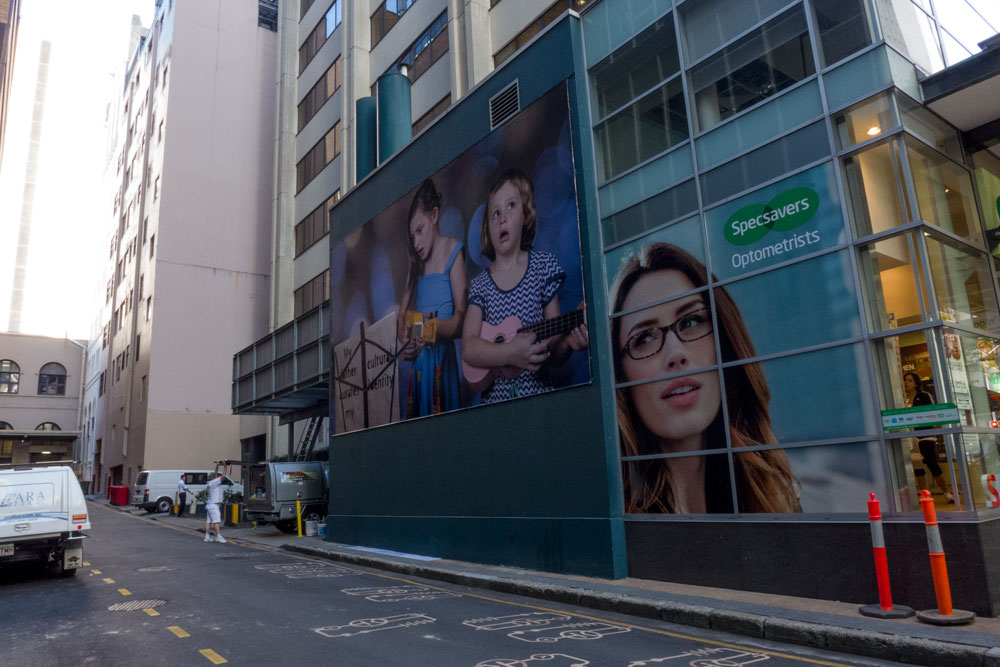 April – October 2014: Revelation #7 explores the relationship between family photography, myth and reality and is part of my ongoing series entitled Revelations. It presents the underlying insecurities, egos and vanity of family life, normally masked and obscured by family photos. The images presented in this series suggest the deficiencies of a father who is revealed as an object of derision by his children for the inept decisions made by him about their lives. In Revelation #7 the father’s cultural impositions upon his children suggest more to do with making him seem culturally ‘in-touch’, than encouraging his children’s inherent cultural interests.

I am not sure people walking past this laneway understood all of that!

The next lane , being across the street from the former, was Eagle Lane. This was a real laneway as you could pass through to another street or two. On the day i visited, it was very quiet. The artwork is at the top of the laneway and you can see one of the pieces as you approached. 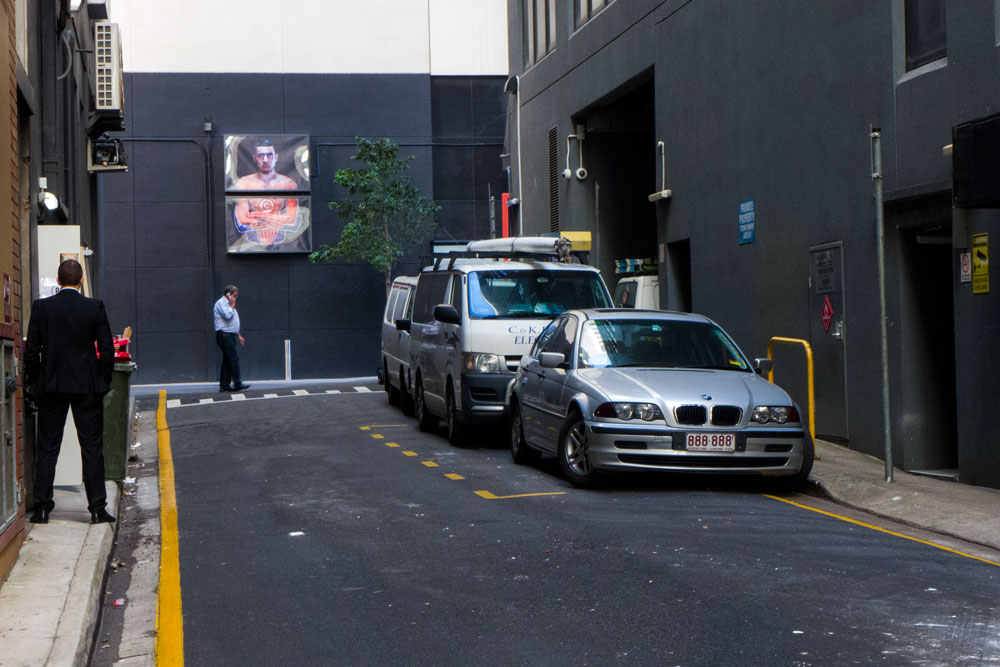 The remainder of the work is made up of three panels that are located to the right of the top cross-section of the lane. This artwork actually look like an rtwork but I am not sure how many people passing took the time to work out what they were about. I watched for about ten minutes. There was not a lot of passing traffic and just one person glanced up. 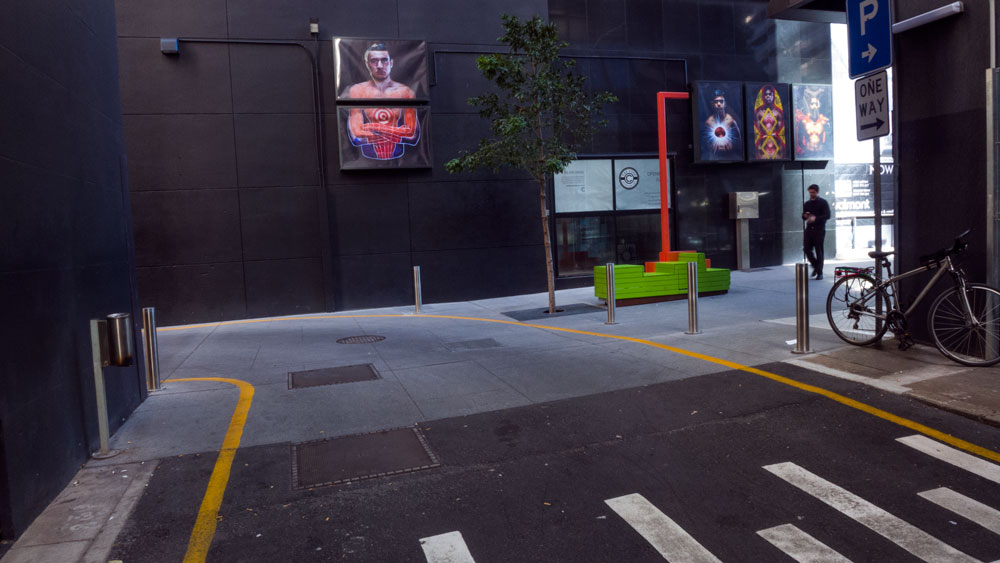 April – August 2014. The Brothers series is based on a real life incident involving a police car-chase of a group of joy-riding teenage boys in Woolloomooloo in which two of the boys were shot and wounded. I was inspired by this event to explore a series comprising uniformly photographed young men with a red target painted on their bare chests. Despite being presented literally as ‘moving targets’, they stand defiant, resolute and strong, bathed in a pool of warm light and surrounded by darkness. These works illuminate a complex world around these young Aboriginal subjects, one that flickers between understanding and misunderstanding.

I suggest that anyone walking past would work out that these were artworks of a political nature. Not sure if they would make all the connections, but at least the people who noticed them would probably have a thought or two about them.

The last one was in Hutton Lane just of Adelaide street. This meant that they were visible to people in the Adelaide Street. However given the graphical nature of the works I am not convinced that people who passed by or who stood around in the sun understood that they were artworks. 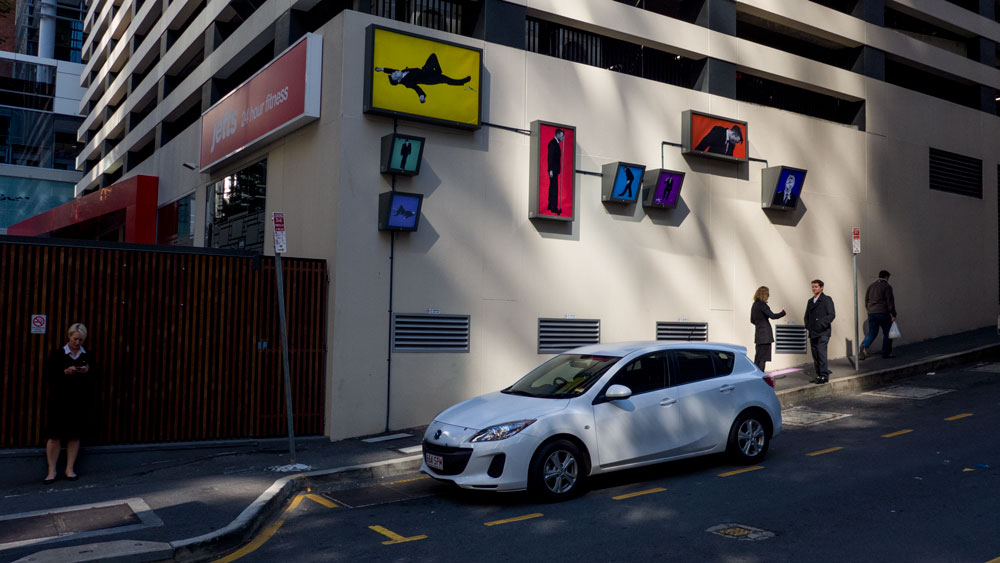 April – August 2014. The pain of others is amusing. This is encapsulated by the German term Schadenfreude, which translates to ‘harm-joy’. In English it is better known as ‘slapstick’. Two ways to view this phenomenon are that humans are innately cruel, or that we instinctively make light of misfortune to make it more bearable. My work is inspired by the absurd contradictions of human existence. In this series slapstick acts are repeatedly performed on the self to exaggerate their violent capacity for humour and highlight the coexistence of these two seemingly distinct ideas. It was quite painful. I hope you enjoy it.

As an extra, I checked out the site of a previous laneway project, and spotted more of the painted designs on the bitumen. Here’s what I found. 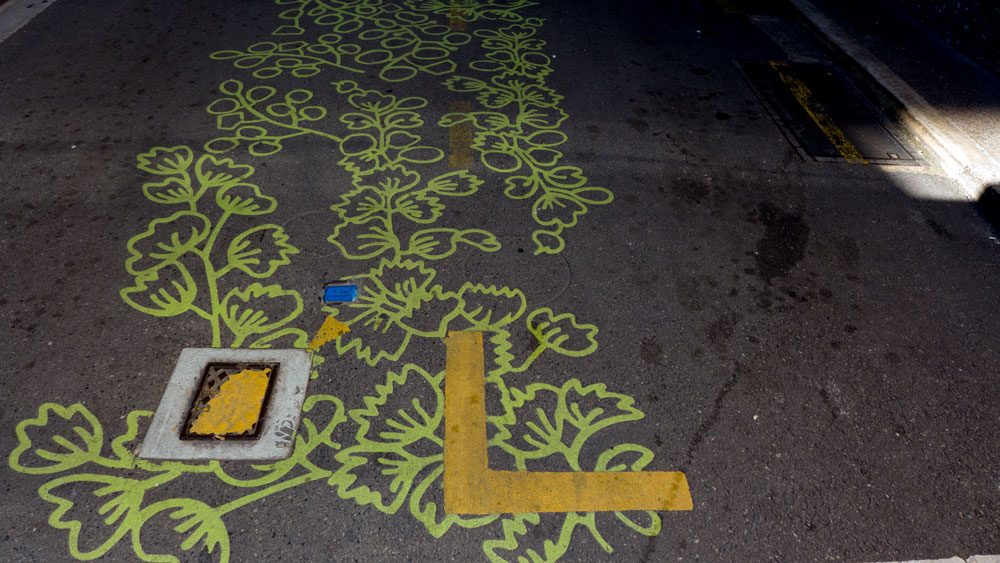 This laneway program has an ambitious set of targets. From the council website:

The program aims to create places:

I have to wonder how the council is to measure the successes against these very ambitious targets.

But before I go on, I must say again that such programs are to be commended and very much encouraged. Again, my advice is that project officers should be banned from using all that clichéd marketing spin when they are writing their promotions.  The prime target in these exercises is to engage with the general public and most of this work would not achieve a high rating against this target.

These small and tentative celebrations of the visual arts are a commendable effort by the council to place some artworks in public laneways. However I could not help feeling that if the council wants to be serious about placing such artworks outside to engage the public, then it will take a much more seriously funded and supported program.

Given the nature of the present effort, I would not encouraging people to wander around the CBD to seek these out. However I do hope that anyone in the area would have a look and I hope that those passers-by who do realise what they are, do in fact enjoy them.

I look forward to a time when the Brisbane City Council takes such exercises far more seriously and then it will register with locals and visitors and attract more attention to a CBD area that is fairly bland at the moment. More visual art in the streets of this CBD is well and truly needed.