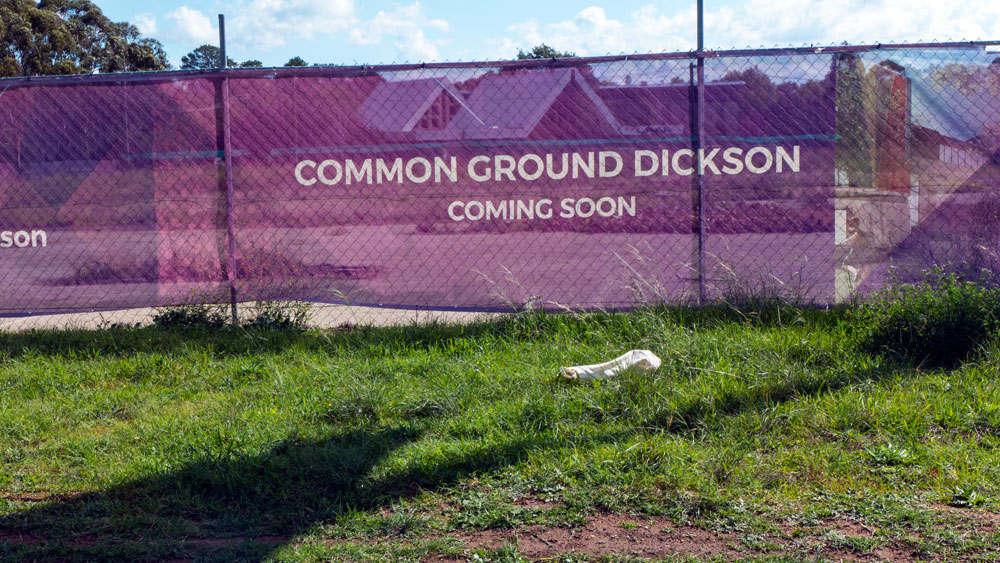 As the COVID-19 crisis took hold and people bunkered down, residents hoped for less stupid things by the ACT Planning Directorate.

Unfortunately, the infamous planning juggernaut, under the leadership of Ben Ponton and several ministers, has continued to mess with people’s lives. It has taken the opportunity to up the pressure.

Not long after I took the picture published here, I realised how malicious the government had been in hanging the banners for this social-housing complex.

The banners were designed to send the clear message that Housing Minister Yvette Berry is going to build her apartment complex on this site no matter what anyone with any intelligence thinks!

She and her political colleagues have little interest in addressing the local community’s aspirations and they intend to ignore the logical evidence why this housing complex should not be on this site. Everyone knows that she needs to do this to satisfy her own perceived political imperatives. Stupidity rules again!

On March 20 the Planning Directorate released the development application (DA) for Common Ground Dickson. This set of documents illustrate the serious flaws with the ACT government’s planning processes.

The DA demonstrates contempt for residents and that the planning processes are corrupted beyond belief. This DA is a shameful example of incompetence and not something that any planning professional would be proud of.

It must be emphasised that it has not been submitted by a fly-by-night developer. It has the authority of Minister Berry and those within her directorate who signed off on it. This flawed DA has been assessed by the chief planner’s staff as being ready for serious consideration and possible approval.

For those in the community who have read the 68 documents, it has become obvious that this DA should have been rejected the minute it arrived.

In an earlier pre-consultation draft there was a road to the south of the site. The community could see that this meant many mature trees were to go and the road served no purpose.

Local members and ministers Rachel Stephen-Smith (Labor) and Shane Rattenbury (Greens) issued statements to say that the community had it wrong and that such a road was not to happen, and those dozens of mature trees would not go.

Yet within these latest documents, it is mentioned at least six times. Yep, it’s back! If this DA goes ahead, down come those trees. Did the ministers lie? Or are they being played for fools by their own bureaucrats?

Within the ACT Legislative Assembly’s committee reports, there is a record of Stephen-Smith saying that anything on this site will be about three or four storeys. The DA as submitted is for at least six storeys. Have residents misunderstood? The use of alternative facts has been common through this whole sad saga.

Thanks to Dickson Residents’ leader Jane Goffman, mistakes are being identified and information disseminated among residents for feedback. Measurements are incorrect, plans and reports are missing, details that should be in a DA have been omitted and the block size is mysteriously way off the mark.

One resident bravely took up the offer from the directorate to read the documents at the planning HQ. She was expecting a hard-copy version. Instead a screen was turned in her direction for her to stand at the counter and read through the 68 documents. Someone is working hard to make this whole process as difficult and as misleading as possible.

When it comes to planning and development, this government’s continual assault on the lives of the inner-north residents and those across Canberra must be as bad as it gets. The ACT Labor/Greens politicians and their planning bureaucrats now share the category of infamy with other developers such as those that were opposed by New York’s Jane Jacobs (Google her).

Common Ground Dickson may sound like a worthy project, but the processes being used to force it on to the local community are an utter disgrace with this current DA being Yvette Berry’s latest Boris Johnson moment.