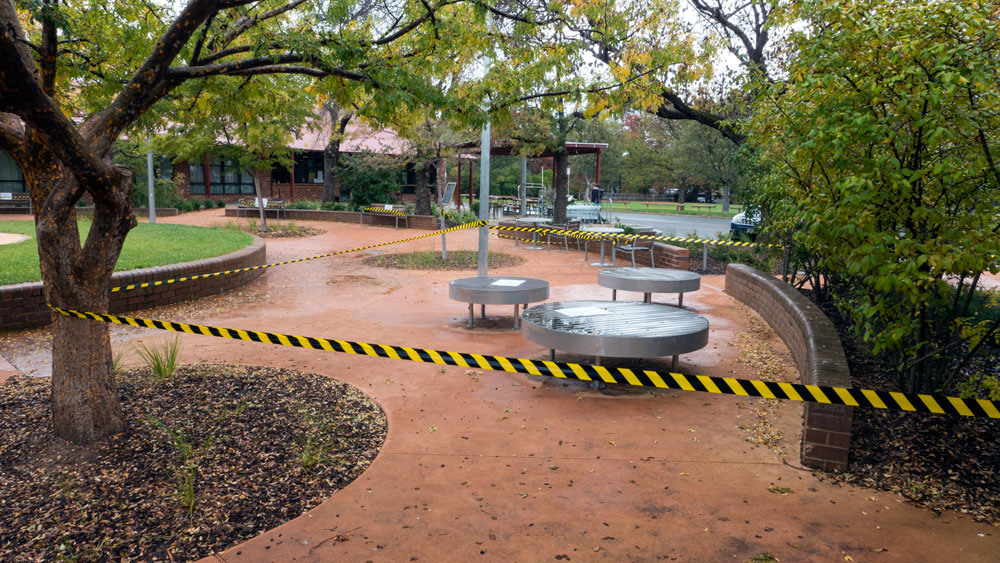 One of Canberra’s hard-working community groups has discovered that it has been bestowed an authority it did not know it had.

The Downer Community Association (DCA) is well established within the suburb for looking after the community hall as well as taking on the huge challenges of representing the local residents.

Things changed on Tuesday, April 21, when the DCA’s secretary answered the phone to discover the police wanted to meet with her at the Downer Community Square. The police wanted to talk about COVID-19 and the very popular Gang Gang Café.

The story goes that people had been supporting the café by calling in as often as possible to purchase coffees and take-away food. Some made use of the permanent seats in the square to stop and consume their purchases.

Most people were mindful of the emphasis on social distancing and that gathering was limited to being a group of two. Strictly speaking, people should have shown up by themselves or at the most as couples to make their purchase and then returned home. Despite this, some people did linger. This went on under the radar till last Tuesday.

On the day four blokes decided to sit together with their purchases and carried on as if nothing had changed. Whether this was ignorance or a sense of privilege is not known.

However, someone thought that they had to do their civic duty and rang the police to alert them to how the lockdown rules were being broken in that centre of radical thinking – being the Downer Community Square.

The police duly arrived and asked people to leave. Then something strange happened. The officers needed to have the place taped off and needed a local authority to implement this decision. Hence the phone call to the DCA.

When the DCA secretary was later questioned about this previously unknown authority of restricting people from using the seating in this public space, she responded that she was not going to be the one to not follow the very clear instructions from the local constabulary.

The DCA duly taped off all the seats and tables as well as stuck up signs explaining why they had done this. For most people this was understandable. Most people have a smile on their faces when talking about this event.

They were conscious that the police have better things to do than to be constantly called out to check on subversive activities in central Downer. The taping off is probably a little over the top, but such is life when the whole city is in lockdown. It is about keeping us all safe.

One little amusement is that the central clock pavilion seats are rarely used. The one person who regularly uses these seats is the local postie who stops to have his lunch there every day. He was probably surprised to find his quiet lunch spot now officially off limits.

There is a big message I would like to finish on. During this lockdown we must stay home as often as possible. But we also need to support your local cafes and take-aways. Many locals have increased the number of times they now get out to purchase a take-away.

This is being encouraged to ensure that local businesses come through these stressful times when their businesses have taken a serious hit in turnover. For Downer and nearby residents, the message is to continue to support the wonderful Gang Gang Café – to call by for coffee and a take away – but to then move away (go home). The same goes for others reading this – please make that extra trip to your local take-away or café.

We can do this. And keep smiling.

As for the Downer Community Association – let’s hope that these new powers don’t go to their collective heads!