Opinion: Voices of Wisdom amongst so much ranting.

Comments on the statements by Australia’s Governor General, Quentin Bryce. 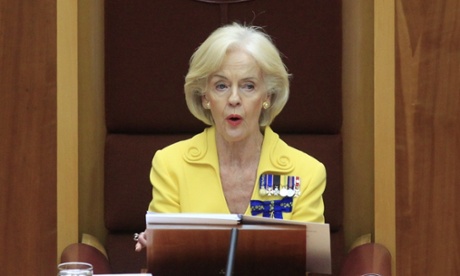 Every now and then Australians are taken aback when one of our national representatives actually makes intelligent and thoughtful contributions to public debates.  This happened recently with the delivery of the Boyer lectures by Australia’s first female Governor General, Quentin Bryce.

The Governor General included in her lecture a reference to a future whereby she would like to see ‘an Australia where people are free to love and marry whom they choose’.

She also made the following reference ‘where perhaps, my friends, one day, one young girl or boy may even grow up to be our nation’s first head of state’.

The mainstream media and the ABC immediately ran the headlines that she had the audacity to back gay marriage and the republican movement.

This was quickly followed by all sorts of rants about whether she should make such comment.

There is an ongoing phenomenon in regards to national political statements that started before the last federal election and continues today.

If anyone makes a comment that could in any way be taken as a criticism of Tony Rabbot, and now the present Commonwealth Government, then the machine goes into hyper-drive whereby the usual suspects of shock jocks and supportive journalist come out of their trees to descend on the realm of public debate with all sort of wild accusations.

It is as if the Tony Rabbott support machine knows that dear leader is not capable of defending himself with any words intelligent or sensible, and so the machine is geared to become active at any moment’s notice to defend all perceived attacks. They must know that if he falters and falls that their own access to power would be diminished.

And so valuable media time was again filled with attacks that were sometimes partly respectful, and at other times just plain rants from those who role it is to push the conservative machine’s ideology.

Finally the voice of calm made its way through the noise and we have now seen a few commentators pointing out the obvious.

This is Quentin Bryce and it has always been so. She is completely transparent about her views. This is best summed up by the final paragraph from a piece here in the Guardian.

She is undoubtedly a progressive, and an outspoken one at that. But most importantly she is a champion of equality in education, employment, protection and opportunity. It would be a mistake to view her comments on same-sex marriage and an Australian head of state as partisan meddling. They are a statement of her firm belief in equality for all. Nothing more and nothing less.

All the above was the usual par for the course. But all those nasty and stupid comments were nothing compared to the vitriol put online by Amanda Vanstone.  Dear Amanda is a card carrying Liberal and has on occasions made some sense. She does however fall into line to defend Tony Rabbott as heard recently on the subject of the government’s treatment of refugees and then again on how the government is not informing the Australian people as to what is happening.

But when it came to her comments about the Governor General, she really decided to be the ultimate bitch.

She attacked the Governor General on the basis that someone her high office should not speak on national issues. So no Governor General has done this before? There was William Deane on aboriginal issues at a time when her Amanda’s own government was not being very nice to our indigenous peoples. There was that Governor General that conspired to bring down the Whitlam government. Shall we list all the previous ‘English men’ who had seen their role to guide the colony.

Towards the end of Amanda’s article she really opens up and puts the boot in about the fashion and style sense of the person who is the Governor General.

Maybe she is simply jealous. Is there something else back there whereby she obviously admires a previous male Governor General but cannot stand it that Quentin Bryce may be far better remembered for her many positive beliefs. 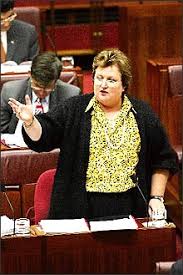 I am reminded of a quote in our local press whereby a writer quoted his friend who said:

I have a colleague who proposes that we should have a new law that would enable us to issue writs for vexatious and egregious infantilism and gross inanity in a public space.

Amanda Vanstone must be getting close to being on the list for one of the first to be considered once this law is enacted.

Meanwhile I am proud to have Quentin Bryce as our Governor General although I look forward to the day when the position is not an appointment by a foreign monarchy.

I always remember seeing this image. I dread to think who the Rabbott government will appoint early next year when Quentin Bryce’s completes her term of office.

and someone else thinks she will be a hard act to follow – see this link.