is this what we signed up for? 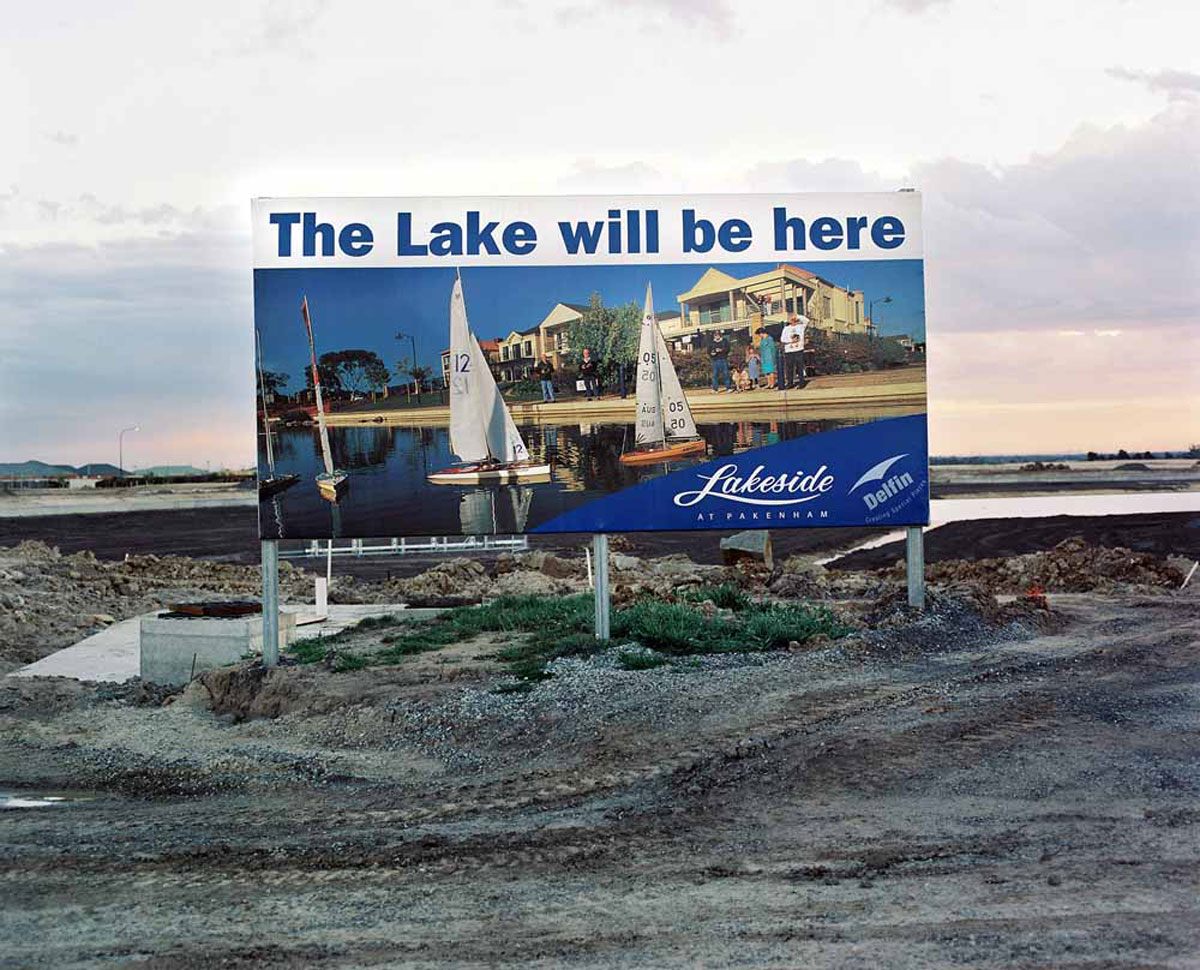 Developers love putting up their signs of things to come that will make life better for future residents.

There are always banners and signs around Canberra with developers keen to attract buyers to their vibrant and sustainable apartment towers and crammed housing estates.

In the National Library’s documentary photograph exhibition, “Viewfinder” there is a 2005 photograph by Paul Dunn that is a reminder that this form of enthusiastic sales push is not new. The sign promises the wonderful life in the new estate beside the yet-to-be-built lake.

The developers take these matters seriously, but some of us have a quiet chuckle about the claims and promises made. Many signs can be read in other ways.

There are also residents in many new suburbs who can remember the promises made to encourage them to buy. Then they waited and waited for the shops, the schools, the community facilities and those easily accessible bus networks. They didn’t quite get what they signed up for. 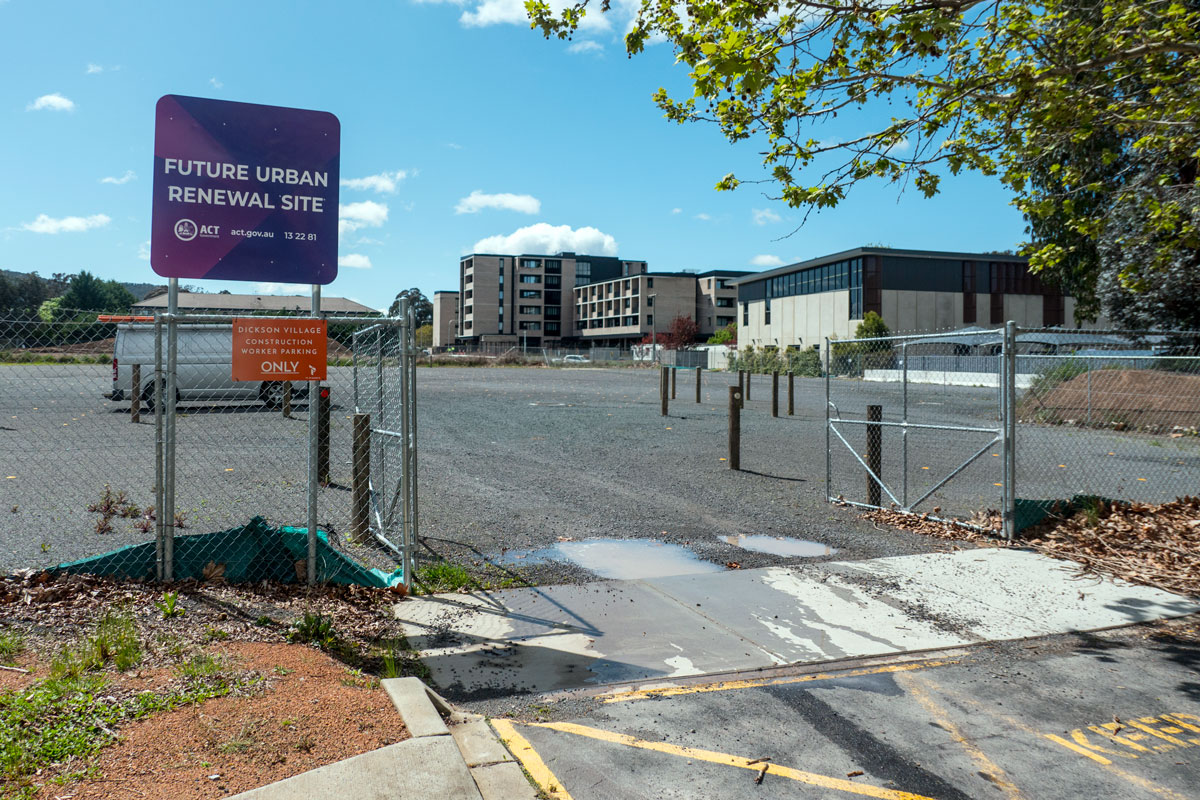 When the government wants to be less than transparent it uses tricks and deceptions. One is to simply stick a sign up and see what happens. In the case of the location of the sign above “Future Urban Renewal Site”, the government knows that this Dickson site remains a hot topic within the inner north.

In the middle background sits the new very institutional-looking Common Ground building. One of the debates about the government varying the lease on the land so that Common Ground could go ahead, was that this was clearly being done as a precursor for what the government had in mind for the other open spaces on this parkland site – Section 72 Dickson.

The sign above is actually a land claim. It is an in-your-face signal that the government intends to make use of what it views as a land bank for future sales and development. This is money for the tram.

The current zoning has this land as a community site. A people-focused and intelligent government would be mindful of the community and cultural facilities now required for the high number of new residents coming into this part of the inner north. New apartments and on-going infill are happening and is expected to increase in the near future.

Not Greenslabor. Land must be sold and the tram funded. The need for appropriate community facilities, arts facilities, open spaces and all that stuff that Labor and The Greens used to care about are now off the agenda.

Inner-north residents still wishfully sign up for improved facilities. Maybe local politicians could represent their communities and work to enhance community and cultural facilities by keeping this Dickson site for such facilities rather than just another sale. 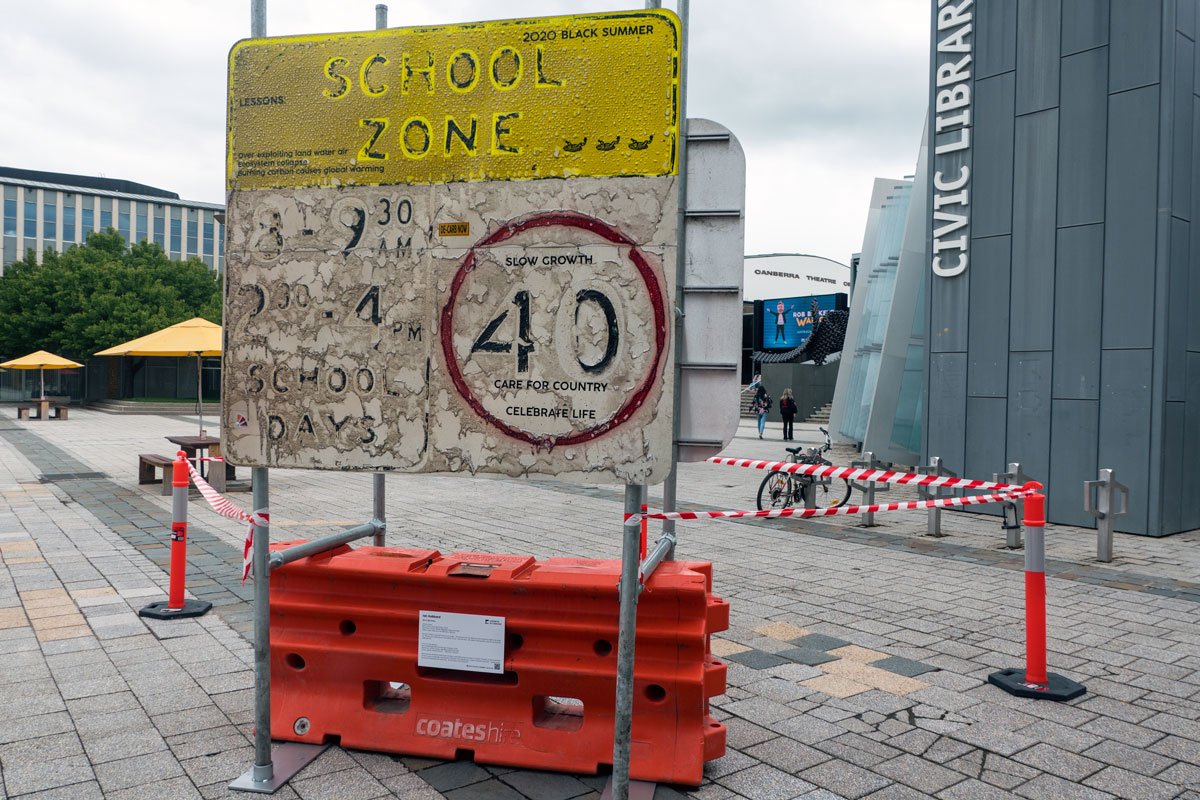 Ian Hubbard’s artwork was part of the Canberra Art Biennial in October this year. This work was in Civic Square. It provided a stark reminder of what happened in the summer of 2019-2020 when there were fires and massive destruction.

Two years ago, we were heading into summer fearing the worst. It happened.

Climate change is not something we signed up for consciously. But maybe we did, given the last few centuries of how we have treated this planet.

Ian’s signs are a reminder that we need to be deadly serious about the crisis of our own doing. Hopefully, an ACT politician or two wandered out of the Assembly building to see the artwork and ponder on the messages.

The National Library exhibition, Viewfinder: Photography from the 1970s to Now until April 30. The photographer Paul Dunn has a busy practice in Melbourne.

The Canberra Art Biennial 2022 was in October in many locations throughout the city. For a reminder of the bushfires – click here.